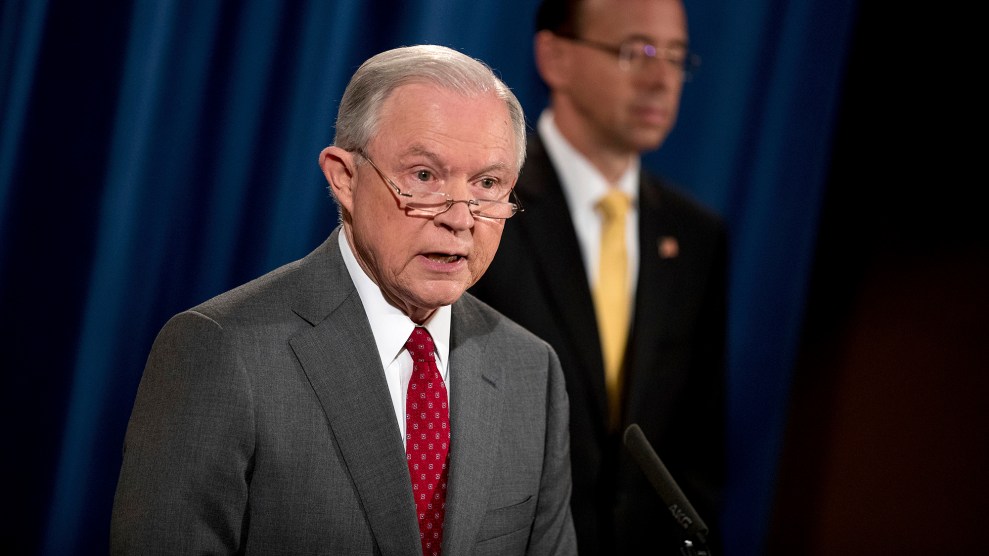 With President Donald Trump dithering for two days before denouncing the hate groups that sparked violence in Charlottesville, Virginia, and with the continued presence of figures in his inner circle with ties to white nationalism, including chief strategist Steve Bannon and political adviser Sebastian Gorka, a decisive federal response to the surge of deadly white supremacist activity is unlikely to come from the White House. That leaves the Justice Department to take charge. It’s an awkward role for Attorney General Jeff Sessions, who for decades has been critical of civil rights and hate crime laws. But on Saturday, the Justice Department launched a civil rights investigation into the mayhem in Charlottesville—and how it pursues that investigation will be a test of whether the Trump administration is willing to take on white supremacist groups.

“We need reassurance that we have leadership at the federal level who can deal with this hate crime and with this domestic terrorism,” says William Yeomans, who spent 24 years as an attorney in the Justice Department’s Civil Rights Division. “This is a test.”

Civil rights groups want to see a robust investigation that leaves the door open to both hate crime and terrorism-related charges. The federal government has the resources and jurisdiction to conduct the widest-ranging multi-state investigation. But the response of the Justice Department, and the seriousness of the effort, will also signal the extent to which the federal government will take the threat of violent racist groups. “This is a matter of leadership,” says Yeomans, who is now a fellow at the progressive legal group Alliance for Justice. “You need to have the attorney general of the United States pushing this investigation forward, particularly since the attorney general of the United States is suspect on these issues, has a very bad records on civil rights.”

The Justice Department announced on Saturday night that it was launching a civil rights investigation into the actions of an attendee at the white supremacist rally in Charlottesville, identified by police as James Fields Jr., who drove his car into a group of anti-racist protesters, killing one woman and injuring 19 others. The announcement, more than nine hours after the incident and after lawmakers in both parties had called for a federal investigation, came from the US attorney’s office in western Virginia, not from Sessions, and it did not appear on the Justice Department’s website. On Monday, however, Sessions called the attack “an unequivocally unacceptable and evil attack” and promised to seek “the most serious charges that can be brought.”

Civil rights groups have commended Sessions for launching a civil rights investigation. They have also pledged to keep close tabs on the investigation to ensure it is as robust as possible. “We are pleased to hear that Attorney General Jeff Sessions has opened a federal civil rights investigation,” Kristen Clarke, the president of the Lawyers’ Committee for Civil Rights Under Law, told reporters on a conference call Monday, “and we intend to bring pressure to bear at every stage to make sure that they follow through on conducting a thorough investigation to determine what charges should be levied against James Fields and any other individuals or organizations that may have had a hand in the violence that ensued on Saturday.”

At this point, experts say the Justice Department should be looking at the matter as both a potential civil rights case and a potential domestic terrorism case. A determination of which federal laws could ultimately be used to prosecute Fields won’t be made until the investigation unearths more facts.

There is no specific charge for domestic terrorism, but such a designation could mean more authority for the government to seize assets and records. It also carries important symbolic meaning. “It does meet the definition of domestic terrorism in our statute,” Sessions said Monday. The question of whether the incident meets the definition of a hate crime is tricky. Though the situation clearly involved a clash over the issue of race, hate crimes usually target victims specifically because of their race, not because of their beliefs about race. Since the incident was likely intended to send a political message and target people because of their beliefs, it could become a terrorism investigation. Yeomans says that the FBI’s civil rights and national security units should be involved in the case to keep both civil rights and terrorism charges on the table.

“The federal government should leave no stone unturned in exploring the range of federal laws that may have been violated in Charlottesville on Saturday,” Clarke said on the call. “There is the Matthew Shepard and James Byrd [Jr.] Hate Crimes Prevention Act that may have been violated. And civil rights conspiracy charges may be appropriate.” The Matthew Shepard Act expanded hate crime protections to crimes motivated by sexual orientation, gender, gender identity, and disability.

The Justice Department is investing significant resources in the investigation, a department official said in a statement without offering any precise numbers. “The Department and the FBI have already devoted a massive amount of manpower to this matter, with scores of federal officials working with our local law enforcement partners in Charlottesville, Virginia, where the attack occurred, and in Maumee, Ohio, where the subject resided,” the official said. The investigation is being jointly run by the US attorney’s office for the Western District of Virginia, the FBI, and the Civil Rights Division’s Criminal Section.

The Justice Department under Sessions has gotten more attention for the actions of the Civil Rights Division’s Civil Section, where political appointees have changed the government’s position in high-profile voting rights cases and opposed extending workplace discrimination protections to gay and lesbian workers. The changes echo rollbacks in civil rights enforcement under previous Republican administrations. In recent decades, Yeomans says, Republican administrations have used the Criminal Section to prosecute racially motivated crimes and demonstrate that they care about civil rights violations—even while walking back enforcement of systemic problems and remedies on the civil side. “It provides political cover for them because they have traditionally been somewhat on the defensive about cutting back on enforcement of civil rights,” he says. “So one response has always been, ‘But wait, we’re prosecuting these terrible people who have committed these civil violations. Obviously, we oppose civil rights violations.'”

It’s unclear whether that pattern will hold under Sessions, who as a senator opposed the Matthew Shepard Act. The investigation into what happened in Charlottesville will be an early test of how the Civil Rights Division’s criminal side under Sessions will address racist groups newly emboldened by the Trump administration.