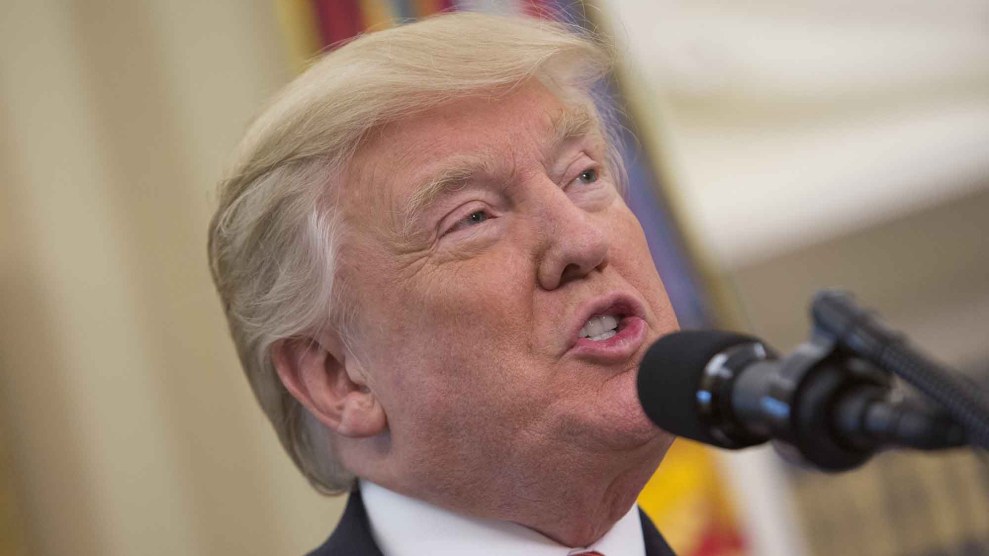 As President Donald Trump heads down to Arizona for a rally Tuesday evening, a lot of the attention is focused on potential clashes between Trump supporters and protesters and the possibility he’ll announce a pardon disgraced former Maricopa County Sheriff Joe Arpaio. But there’s another subplot worth watching: the escalating battle between Trump and Senate Republicans over Arizona’s 2018 Senate race.

The fight stems from Trump’s ongoing feuds with Arizona’s two Republican senators, Jeff Flake and John McCain. In 2015, Trump famously insulted McCain’s experience as a POW in Vietnam. McCain has been a thorn in Trump’s side at various points during his presidency, including casting the deciding vote to kill the latest Republican attempt to repeal Obamacare. For his part, Flake has been an ardent Trump critic and slammed the president in a recent book. Trump took to Twitter on August 17, calling Flake “toxic!” And Trump went even further; he praised Kelli Ward, a conspiracy theory-friendly former Arizona state senator who unsuccessfully ran against McCain during the 2016 primary and hopes to unseat Flake in 2018.

Great to see that Dr. Kelli Ward is running against Flake Jeff Flake, who is WEAK on borders, crime and a non-factor in Senate. He’s toxic!

That’s not quite an endorsement of Ward, but it’s a lot more friendly than the message being sent by GOP leaders in the Senate. On Tuesday, hours before Trump’s rally, the Senate Leadership Fund, a Super PAC run by allies of Senate Majority Leader McConnell (R-Ky) and funded by donors allied with McConnell, released an ad slamming Ward and her “crazy ideas.”

The ad largely mirrors one released during the 2016 primary by McCain’s campaign committee. McCain beat Ward by nearly 13 percentage points in that race. Ward’s campaign released its own ad on Monday slamming Flake and asking him, “Why are you still attacking the president? Just to sell copies of your new book?”

Robert Mercer, one of Trump’s major donors and a major funder of the pro-Trump website Breitbart News, donated $300,000 to a PAC supporting Ward’s primary bid, according to Politico, which notes that the White House has met with several potential primary challengers to Flake.

It’s not yet clear whether Trump will use his high-profile appearance at the Phoenix Convention Center to fan the flames of his fight with Flake and McCain. But it certainly wouldn’t be surprising if he did.