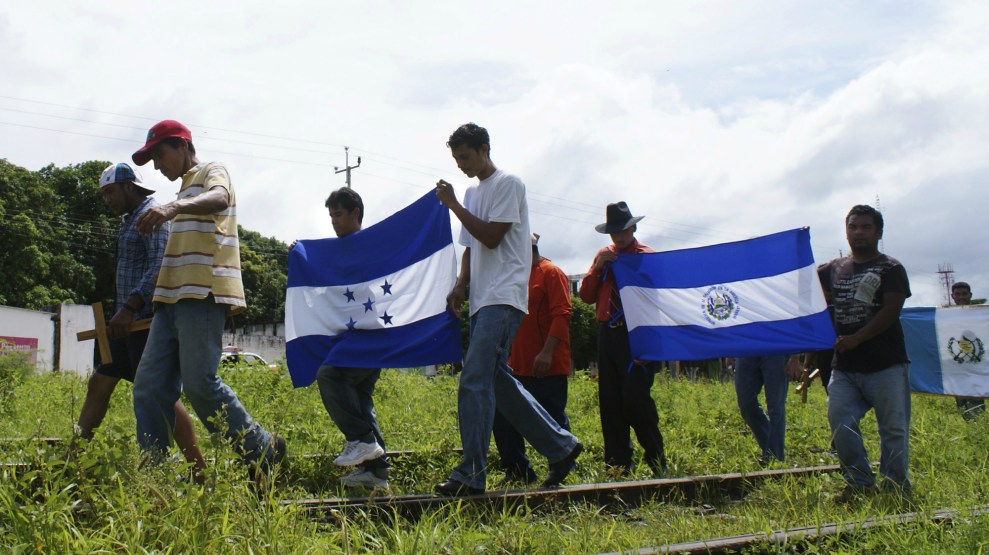 This story is the third in a series about the Trump administration’s potential termination of Temporary Protected Status for people from Haiti, Central America, and elsewhere. Read about the administration’s actions on Haiti here and the stakes for Haitians in the United States here.

For Orlando Zepeda, the United States was a refuge from conflict. In 1984, Zepeda, then a teenager, fled his home in El Salvador, which had been devastated by a violent civil war that would last more than a decade. He crossed the US border without documentation and was detained by immigration authorities. After a week, he was released, and he settled down in California soon after.

Zepeda worked several jobs, including stints as a janitor and landscaper, and took night classes at a local high school. In 1993, he filed an asylum petition, citing the violent conditions in El Salvador. His petition was ultimately rejected, but he was able to obtain work authorization while it was pending. He helped start a prison ministry, where he continues to work as a chaplain. He also works in an assisted living facility, where he helps people with Alzheimer’s disease and dementia. Zepeda and his wife, also a Salvadoran immigrant, have two adolescent children who were born in the United States and are US citizens.

Zepeda and his wife have likewise lived and worked here legally for the past 16 years. In 2001, they were granted Temporary Protected Status (TPS), given to nationals of countries struggling with the aftermath of natural disasters, wars, or other humanitarian crises to allow them to reside and work in the United States until they can safely return home. Zepeda, now 51 and based in Los Angeles, says he has given his “best years to this country.”

But the life Zepeda has built here over more than three decades is in jeopardy. In the next few months, the Trump administration will determine the future of several countries’ TPS designations, including the protections granted to El Salvador in 2001. The administration has already hinted that it will not extend the TPS designation for Haiti, where conditions are arguably more dire than in El Salvador and other Central American countries whose protections are on the line, raising fears that all of these designations will be allowed to expire. If that does happen for El Salvador, Zepeda and his wife will lose their legal status and could be forced to choose between returning to their home country or remaining in the United States without documentation.

“It’s very hard to think about” a future without TPS, Zepeda says. “We don’t have a plan B.”

In May, then-Homeland Security Secretary John Kelly announced that Haiti’s designation—which began after an earthquake rocked the country in 2010—would be extended for just six months, through January 2018, far less than the 18-month extension that countries have usually received. In the announcement, the Department of Homeland Security suggested that additional extensions were unlikely, and Kelly, who was recently named President Donald Trump’s chief of staff, said that “beneficiaries should plan accordingly that this status may finally end.” The decision on Haiti was the Trump administration’s first big move on TPS, and it suggests that nationals from other countries with TPS could soon find themselves without legal protection from deportation.

Between now and March 2018, seven countries—Sudan, South Sudan, Honduras, Nicaragua, Haiti, El Salvador, and Syria—will see their current TPS designations come up for renewal. The other three countries with TPS protections—Nepal, Somalia, and Yemen—will be up for renewal later in 2018. Of particular concern are the fates of El Salvador and Honduras, the two countries with the largest numbers of TPS holders. If Honduras’ TPS designation is allowed to expire in January and El Salvador suffers a similar fate in March, some 250,000 people could be pushed into the shadows or out of the United States altogether.

“These countries don’t have the capacity to really absorb and reintegrate that number of people.”

Because TPS recipients are required to keep current contact information on file with DHS, immigrant advocates worry that should their protections end, TPS beneficiaries will become an easy target for an administration that has ramped up its efforts to deport undocumented immigrants. But leaving the country could be even more daunting. Honduras and El Salvador have high levels of corruption and violence, particularly gang violence. “These are countries that are still considered among the most dangerous in the world,” says Adriana Beltrán, senior associate on citizen security with the Washington Office on Latin America. “Not renewing TPS runs the risk of deporting thousands of people back to their home countries, back to very fragile economic and security conditions. These countries don’t have the capacity to really absorb and reintegrate that number of people.”

Trump has repeatedly claimed that undocumented immigrants from Central America are bringing gang violence to the United States. But the administration hasn’t discussed violence in the region as a potential justification for extending TPS. Earlier this summer, Vice President Mike Pence and Secretary of State Rex Tillerson traveled to Miami to attend a conference on Central American security. Elected officials from El Salvador and Honduras asked them to commit to protecting TPS for Central Americans, but neither was willing to do so.

Asked about the future of TPS for Central American countries, a spokeswoman for US Citizenship and Immigration Services, which oversees the TPS program, said in an emailed statement, “The Secretary will make determinations on a case-by-case basis on whether El Salvador [and] Honduras meet the statutory conditions for the TPS program and will make an announcement as their expiration dates near. We cannot speculate on what the Secretary will decide in the future regarding whether to extend TPS designations.”

Evelyn Hernandez has already decided that she won’t return to El Salvador. In 2008, her nephew was killed by a gang in the country, and she says several of her family members are currently seeking asylum in other nations. In the early 1990s, Hernandez’s own efforts to apply for asylum in the United States were unsuccessful, but she continued to reside in the country and was granted TPS when El Salvador was designated in 2001. She regularly sends money back home to her elderly parents. Her husband and three adult children all hold US citizenship, but Hernandez has been unable to obtain a green card. (Due to the restrictions placed on TPS beneficiaries, it is extremely difficult for many of them to secure permanent residency.) After nearly 25 years in the United States, Hernandez says that nothing could make her leave her family. “If I lose TPS, I’m not deporting myself,” she says.

Hernandez works as an organizer for the Central American Resource Center of Los Angeles, where she assists TPS beneficiaries living in the Los Angeles area. In May, the center joined with several immigrant advocacy groups to launch the #SaveTPS campaign, which is working to protect the TPS designations of several countries, including Honduras, El Salvador, and Haiti. The campaign aims to share the stories of TPS beneficiaries across the country in the hopes of increasing public knowledge about the program and securing at least one more round of 18-month extensions for as many countries as possible.

“When the rhetoric about Haitian TPS began, it sent a warning to other groups,” says Martha Arevalo, executive director of the Central American Resource Center of Los Angeles. In the weeks since the administration first announced the short-term extension of Haiti’s status, immigration officials have suggested the country is unlikely to be granted an additional extension because conditions on the ground have sufficiently improved from the 2010 earthquake, even though the country is still fighting a cholera outbreak. Speaking about Haiti in June, Kelly said that rather than allowing foreign nationals to reside in the United States for decades, as is the case with Honduran and Salvadoran beneficiaries, TPS should be used to cover the immediate aftermath of disasters. After a recent meeting between Kelly and the Congressional Hispanic Caucus, Rep. Luis Gutierrez (D-Ill.), a member of the caucus, said in a statement, “Secretary Kelly determines the future of TPS and basically told us he is not sure if he will extend it for hundreds of thousands of people…I think we have to prepare for the worst and get ready to fight mass deportation.”

A recent survey of more than 2,000 Salvadoran and Honduran TPS beneficiaries found that they have spent an average of 20 years in the United States, where they have built families and had children who are US citizens. “This long-term settlement has allowed them to become active members of their communities and contributors to the nation’s coffers,” the report states. According to the Center for Migration Studies, TPS holders from El Salvador, Honduras, and Haiti have labor-force participation rates that range from 81 to 88 percent, far higher than the 63 percent rate among native-born Americans. Another report released earlier this year by the Immigrant Legal Resource Center found that it could cost more than $3 billion to deport TPS recipients from these three countries and that the economic cost of losing these workers could come to $45.2 billion over the next decade.

For Zepeda, the future is uncertain. He and his wife recently applied for permanent residency, but it could take years for them to receive a decision. For now, he just hopes the Trump administration will come to see the value of giving TPS beneficiaries more time in the United States. “We’re not here to make trouble,” he says. “We want to make this country better. I’m sure that if they hear about us, they will see us differently.”