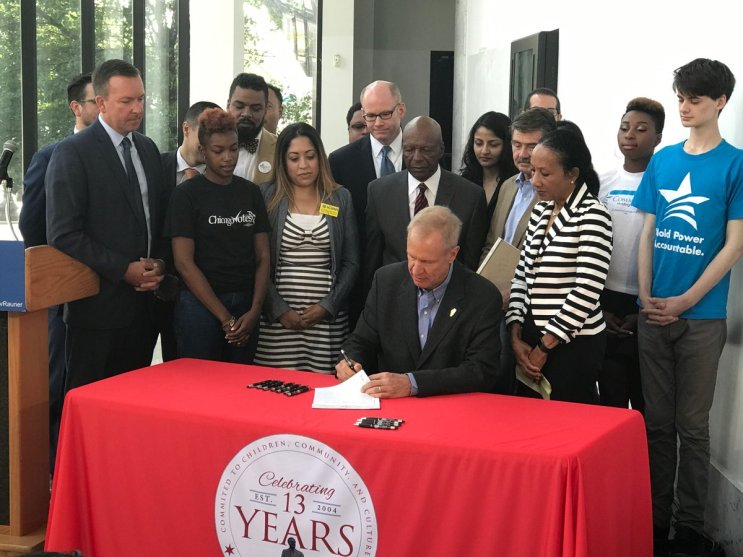 Illinois Gov. Bruce Rauner signed into law on Monday a bill that will automatically register eligible residents to vote. The bill, which unanimously passed the state legislature in July, could sign up over a million new voters, voting rights advocates say.

Illinois is the 10th state to pass or enact automatic voter registration since 2015. Rauner is the first Republican governor to sign such a bill into law. “The right to vote is foundational for the rights of Americans in our democracy,” Rauner said at the signing ceremony.

Here’s how it works: Eligible voters will automatically be registered through an electronic process when they apply for a driver’s license or state ID at the DMV or interact with other government agencies, unless they opt out. Illinois has 2.2 million unregistered eligible citizens. Groups like Demos predict the law will register about half of them.

Oregon became the first state to implement automatic registration last year, and the results were impressive. Roughly 225,000 new people were registered that way, and Oregon had the highest increase in voter turnout in the country from 2012 to 2016. The percentage of people of color who were registered to vote jumped from 53 to 79, according to the Alliance for Youth Action, which lobbied for the reform.

Similar laws have been passed or enacted in Alaska, California, Colorado, Connecticut, the District of Columbia, Georgia, Rhode Island, Vermont, and West Virginia. Thirty-two states have passed or introduced bills to implement automatic registration in 2017, according to the Brennan Center for Justice. Voting rights advocates see the reform as the future of voter registration in the United States and an antidote to laws passed in Republican states making it harder to vote.

“At a time when many states across the country are setting high hurdles between citizens and the ballot box, Illinois is at the forefront of a movement to make full voter participation a reality,” said Ra Joy, executive director of CHANGE Illinois, a government reform group.

Rauner is up for reelection next year in Illinois, a reliably Democratic state. Rauner vetoed an automatic registration bill last year, saying it would lead to voter fraud, but signed a revised version that passed the legislature with unanimous support. “We as a people need to do everything we can to knock down barriers and remove hurdles, so that all those who are eligible to vote can be able to vote,” he said on Monday.

Supporters of the bill noted that Monday’s signing coincided with the 54th anniversary of Martin Luther King Jr.’s “I Have a Dream” speech at the March on Washington. Five decades after King called for universal voting rights, a quarter of Americans are still not registered to vote.

Rauner signed the bill at the Harold Washington Cultural Center on the South Side of Chicago, named after the city’s first black mayor.