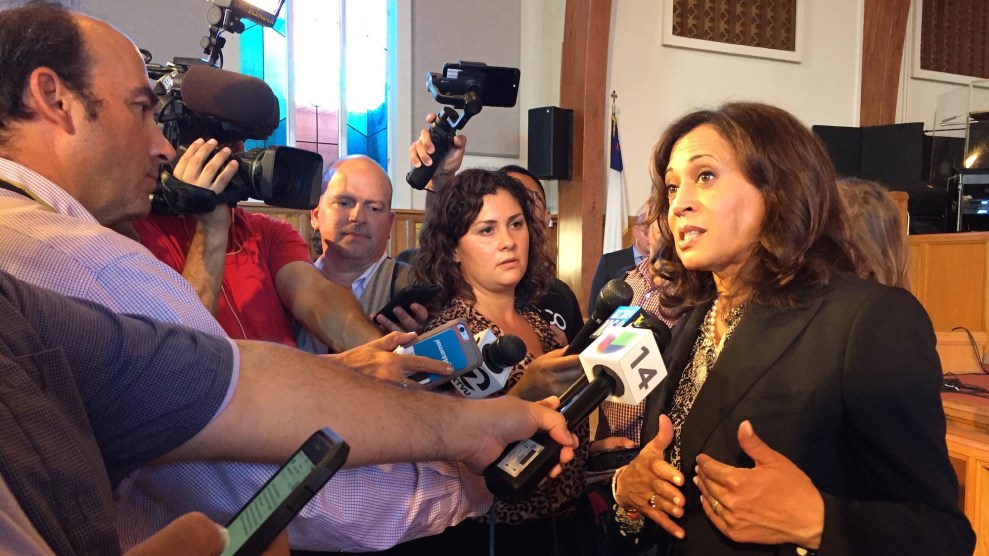 Senator Kamala Harris said on Wednesday that she will co-sponsor Sen. Bernie Sanders’ anticipated single-payer health care bill. This makes Harris the first Senator to publicly announce support for the Medicare-for-all bill, which Sanders has said he’ll introduce in September.

“Well, here, I’ll break some news: I intend to co-sponsor the Medicare-for-all bill because it’s just the right thing to do,” Harris said at the afternoon town hall in her native Oakland, California, prompting the colorful and lively crowd of several hundred to break out in resounding applause. “Somebody should tell my staff,” she finished, laughing lightly.

It’s unclear exactly what Sanders plans to include in the bill, but he’s said his intention is to create a single-payer system by expanding Medicare to everyone. Though Harris is the first senator to formally announce support for Sanders’ bill, several Democratic legislators have expressed support for the idea in recent months.

After the town hall formally concluded on Wednesday, Harris, the former California attorney general, stuck around the Beebe Memorial Cathedral for nearly an hour, speaking individually with several members of the audience and taking selfies when asked.

“I think there’s no question that we have to get to a point where all people have access to affordable health care,” she said to a few reporters and town hall stragglers while the crowd dissipated. “As we talk about moving towards a single-payer system, I think there is certainly momentum and energy around it. When I get back to DC I’ll have a better idea of where [other senators] are now that they’ve been home.”

Sanders himself has said he “has no illusions” that a single-payer health care bill will pass under the current Congress. But Harris expressed optimism that the defeat of the Obamacare repeal attempts was a galvanizing moment for Americans across party lines.

“The recent history on the issue of health care is very telling,” she said. “Americans are making it very clear, when they defeated the repeal of ACA, that they don’t want us playing politics with their health care. They’ve made it very clear that this is not an issue they identify with through their party affiliation. That’s very promising.”