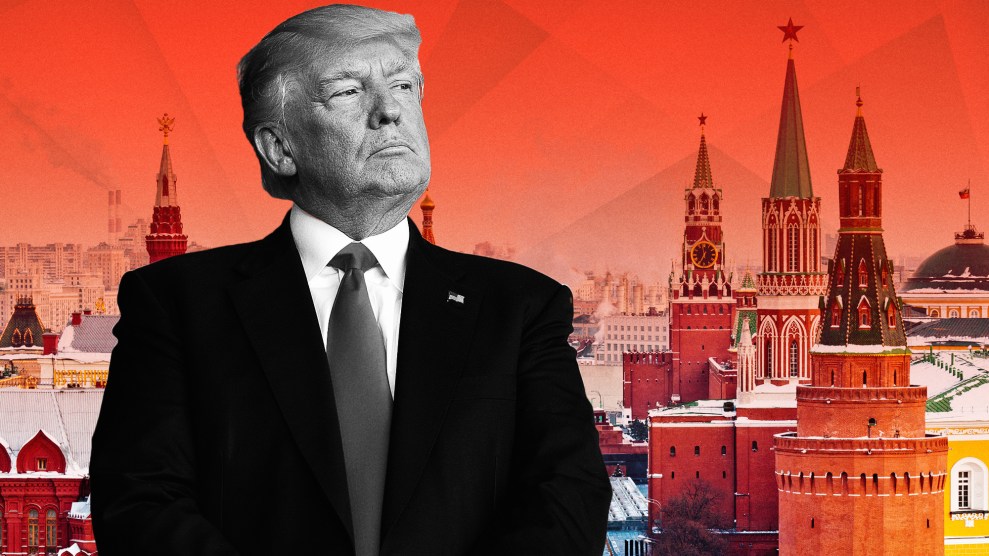 A pair of Trump associates, Michael Cohen and Felix Sater, appear to be gaining significance in the Trump-Russia investigation. News broke this week that during the presidential campaign the two sought a deal for the construction of a Trump Tower in Moscow. And, as reported earlier this year, the pair pushed a Kremlin-backed proposal for the United States to lift sanctions on Russia—part of a proposed “peace deal” between Ukraine and Russia that Cohen and Sater brought to Trump’s then-national security adviser, Michael Flynn.

Congressional investigators are now interested in how the Moscow tower proposal and the so-called peace deal may connect. “That is a question members will be exploring, certainly,” says an official close to the Senate Intelligence Committee. One thread running through both deals is Russia’s desire for relief from US sanctions, which the Trump presidential campaign repeatedly signaled it was interested in accommodating. How that might shed further light on the deals is a “very interesting line of inquiry,” the official adds.

On Monday, the Washington Post and the New York Times reported on emails showing that Sater, who once billed himself as a “senior adviser” to Trump, and Cohen, Trump’s personal lawyer, worked in 2015 and early 2016 to complete an agreement for a Trump Tower in Moscow, efforts contradicting the president’s many claims that he has “nothing to do with Russia.” As Trump praised Russian President Vladimir Putin on the campaign trail in early 2016, Cohen emailed Putin’s spokesman to ask for Putin’s help reviving discussions with Russian partners on the project. Sater’s emails boasted that the deal would help Trump get elected. Cohen and Sater’s emails were among a large trove of documents the Trump Organization turned over to congressional investigators this week.

According to the Post, Trump signed a letter of intent in October 2015 for the tower deal with Russian firm IC Expert Investment. That firm, which describes itself as a residential real estate developer, identifies Russian government-controlled banking giants Gazprombank and Sberbank as financiers for its projects. Sater claimed in an email also to have lined up financing for the Trump tower project from VTB Bank, another state-controlled entity. All three banks are under US sanctions.

Cohen remains in the orbit of a sanctioned Russian bank likely to have been involved in the Trump Tower deal in Moscow.

Cohen claims that he pulled the plug on the Moscow tower deal in late 2015. But after Trump took office, Cohen and Sater went on to push a “peace plan” under which the United States would unwind economic sanctions in exchange for the withdrawal of pro-Russian troops from Ukraine and an agreement to hold a referendum on the fate of Crimea, the Ukrainian territory Russia seized in 2014. Cohen hand-delivered the proposal to Flynn, who was soon forced to resign over matters including his lying about having discussed sanctions with the Russian ambassador to the United States.

The peace plan came from Andriy Artemenko, a Ukrainian lawmaker known for his pro-Kremlin views, who told the Times that senior aides to Putin encouraged him to push the plan. Artemenko said he contacted Sater through an unnamed “mutual friend” who worked with Cohen to get the plan to Flynn. It is not clear if Trump himself reviewed the plan, though around the same time the president reportedly asked the State Department to look into the possibility of unilaterally rescinding sanctions on Russia.

Sater was born in Russia and spent the first six years of his life there. Cohen is married to a Ukrainian woman and once dabbled in an ethanol business in Ukraine. But it’s not clear why the duo was involved in promoting the proposal—neither has diplomatic experience.

Ukraine’s ambassador to the United States, Valeriy Chaly, told the Times in February that the plan that Cohen and Sater delivered could be “pitched or pushed through only by those openly or covertly representing Russian interests.”

Cohen, who joined the Republican National Committee this year as a finance chairman, remains in the orbit of Gazprombank, one of the potential funding sources for the proposed Trump Tower deal in Moscow. In April, Cohen inked a “strategic alliance” with Squire Patton Boggs, a large Washington law firm and lobbying shop—which has reported earning $1.4 million since 2014 lobbying for Gazprombank and advising on its efforts to win sanctions relief.

A Patton Boggs spokesperson declined to address questions about Cohen’s role and whether the firm has taken steps to restrict Cohen from contacts with clients that might create the appearance of conflicts of interest. Cohen formed his alliance with Patton Boggs on April 3; the firm has filed Lobbying Disclosure Act forms stating it has done no work for Gazprombank this year.

“He’s generating a lot of attention right now,” the employee said. “People notice it, but it’s certainly not a distraction for us.”