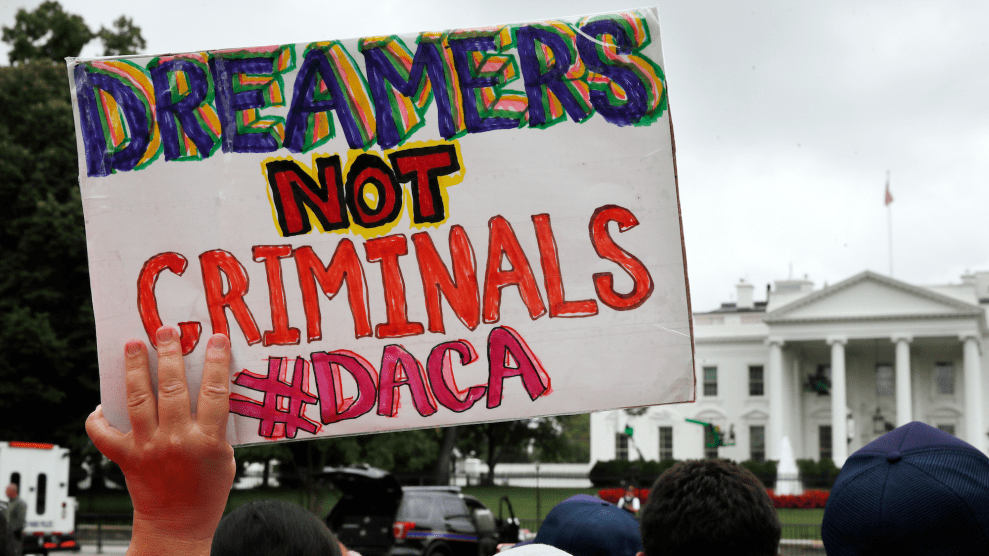 A woman holding a sign at an August rally in support of immigrants who came to the United States as children.Jacquelyn Martin/AP

Update: Sunday, September 03, 2017: Politico reports that the Trump administration has indeed decided to end DACA, after a 6-month delay.

The fate of roughly 800,000 immigrants who came to the United States as children has never been more precarious. President Donald Trump is likely to end protections for the young adults, known as Dreamers, who were given permission to work and study in the country in 2012 by President Barack Obama, multiple outlets are reporting. The decision, which could come as soon as this week, could lead thousands of Dreamers to be deported and many more to stay illegally in the United States, living with the fear they faced before Obama issued his order.

Ten state attorneys general have promised to sue the federal government on September 5 to force the courts to block Obama’s order, known as Deferred Action for Childhood Arrivals (DACA), if Trump doesn’t scrap it by then. That means that one way or another, the program is likely to meet its demise soon. If Trump decides not to end DACA himself, then in order to keep it alive in the face of a lawsuit, he would have to overrule his attorney general, who opposes the program, and force him to defend it in court. The lawsuit would then be heard by a federal district court judge in Texas who is unlikely to be sympathetic to DACA. The judge, Andrew Hanen, already blocked a similar executive action by Obama that protected undocumented parents of citizens and legal residents.

If the fate of DACA is coming into focus, what will happen to Dreamers is less clear. Obama’s executive action let Dreamers work in the United States, instructed immigration agents not to detain them, and changed their status to “lawfully present.” To get those protections, Dreamers have to prove they’ve been in the country since 2007, arrived before they turned 16, and have not committed serious crimes. After getting DACA, they can renew their status for two-year increments. So far, the Trump administration has approved DACA applications at about the same rate as the Obama administration.

Trump, or the courts, could opt for a quick or slow phaseout of DACA’s protections from detention and deportation. As the libertarian Cato Institute, which supports less restrictive immigration policies, recently explained, when John Kelly—then the homeland security secretary and now Trump’s chief of staff—ended protections for parents of US citizens and legal residents in June, he explicitly stated that Dreamers would not be affected. A memo ending DACA could spare current Dreamers again—until their two-year protections expire and they become eligible to be detained by US Immigration and Customs Enforcement (ICE). The last Dreamers would then lose their protections about two years from now.

Alternatively, Trump could end the program immediately and make all Dreamers subject to deportation. Or he could leave it to ICE to decide when it can start detaining Dreamers and deport them—hardly a better scenario for Dreamers. In February, Kelly rescinded the Obama administration’s policy of focusing deportation efforts on recent arrivals and undocumented immigrants with criminal records. As a result, almost all undocumented immigrants are now considered “priorities for removal” by the Department of Homeland Security, which oversees ICE.

But mass deportation could take a while. The Trump administration has deported just 17,000 people per month, a slower rate than under Obama. Part of the slowdown has been due to a 610,000-case backlog in immigration courts. But many Dreamers could still be detained and eventually deported. Hundreds of thousands of Dreamers would likely go into hiding to evade ICE agents emboldened by Trump’s rhetoric and his administration’s sweeping enforcement guidelines. Unlike deportations, ICE arrests are up 40 percent since Trump took office, and the number of noncriminals arrests has more than doubled.

Even if Trump scraps DACA immediately, canceling its employment authorization would be harder, according to the Cato Institute. Dreamers have government-issued employment authorization cards that are also used by other groups, such as refugees. Employers are required to accept the IDs, and there is nothing on them that indicates the person is a Dreamer.

More than 70 percent of Republicans, along with large majorities of Democrats and independents, favor allowing Dreamers to stay in the United States.

Ending DACA would not be a popular move. More than 70 percent of Republicans, along with large majorities of Democrats and independents, favor allowing Dreamers to stay in the United States, according to a June poll by the nonpartisan Morning Consult. Dreamers, about three quarters of whom are from Mexico, have never lived outside the United States as adults and may have little memory of their home countries. Republicans would be forced to explain why they are deporting sympathetic and politically organized young adults who have vowed to “fight like hell” to defend their right to live in the United States.

The economic outlook is just as bleak. The Cato Institute estimated in January that ending DACA would cost the federal government $60 billion over the next decade while reducing economic growth by $280 billion. That conclusion was based on surveys done in collaboration with the liberal Center for American Progress showing that Dreamers are younger and better educated and earn more than the average immigrant. The costs could be particularly high in states with large Mexican communities. In Texas, there are more than 120,000 Dreamers, second only to California. On Friday, a Texas immigration law that lets police officers ask people about their immigration status is scheduled to go into effect. Dreamers are likely to be among those facing detention and possible deportation under the law if DACA is rescinded.

There’s still the chance that the Trump administration won’t end DACA. A group of moderate White House advisers that includes Kelly, Trump’s daughter Ivanka, and her husband, Jared Kushner, reportedly sees the Dreamers as a bargaining chip. They hope, according to McClatchy, that Congress will strike a deal that protects Dreamers in exchange for administration priorities like funding for a border wall and reduced legal immigration.

Democrats have said they want nothing to do with a deal that critics say holds Dreamers hostage. “This is a nonstarter,” Dick Durbin of Illinois, the No. 2 Democrat in the Senate, told HuffPost in a statement last week. House Minority Leader Nancy Pelosi tweeted, “It is reprehensible to treat children as bargaining chips. America’s DREAMers are not negotiable.” They want Congress to pass a standalone bill protecting Dreamers—a measure that’s already earned the backing of Republican Sens. Lindsey Graham of South Carolina and Jeff Flake of Arizona. Advocates for Dreamers oppose the deal, too. “Immigrant youth will not be used as a bargaining chip for a white supremacist deal to terrorize our parents, families and friends,” Cristina Jimenez, the executive director the youth-led advocacy group United We Dream, said in a statement.

Trump’s more nationalist advisers, including policy adviser Stephen Miller and Attorney General Jeff Sessions, reportedly oppose letting Dreamers stay in the country regardless of whether the administrations gets something in exchange. Their views are much more in line with Trump’s base. Thus far, on a variety of measures—from endorsing a bill to cut legal immigration by half to pardoning Arizona sheriff Joe Arpaio—their stances have been the best predictor of what Trump will do on immigration.