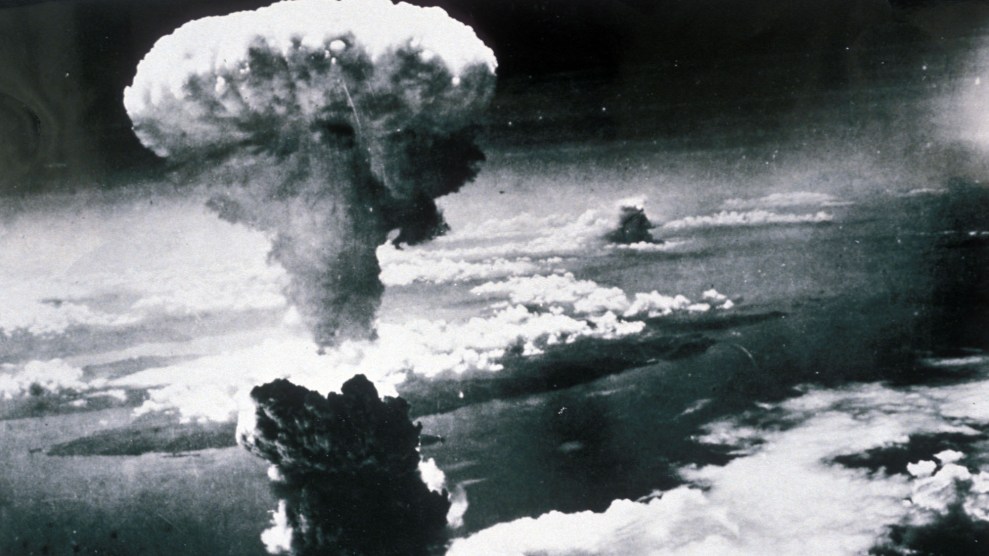 A mushroom cloud over Nagasaki, Japan, in 1945. ZUMA Press

It’s been quite some time since Americans—and citizens of other nations—had to worry about nuclear war during their daily lives. But it has taken just a few tweets and a couple of utterances from President Donald Trump to remind people that the planet can be turned into ashes by the act of one man. So perhaps Trump should be thanked for providing a sort of real-time public service announcement.

Yet Trump himself has no need for such a reminder. For decades, nuclear weapons—and the prospect of nuclear annihilation—have weighed upon his mind, as I pointed out several months ago. Unfortunately, the contradictory thoughts he has expressed on the subject—most notably that he would make a great nuclear arms negotiator and that nuclear war might indeed be inevitable—are not reassuring for anyone freaking out over the current Trump-generated tweet-crisis involving North Korea and its nuclear weapons program.

In a 1984 interview with the Washington Post, Trump, then merely a 38-year-old celebrity developer, shared his fantasies: He was hoping to build the  “greatest hotel in the world” and construct the world’s “tallest” building in New York City—and one day become the United States’ chief negotiator with the Soviet Union for nuclear weapons. In between boasts of how rich and famous he was, Trump declared that he could negotiate a great nuclear arms deal with Moscow and said he wanted to head the US arms negotiating squad. “He says he has never acted on his nuclear concern,” the newspaper reported. “But he says that his good friend Roy Cohn, the flamboyant Republican lawyer, has told him this interview is a perfect time to start.”

Comparing crafting an arms accord with cooking up a real estate deal, Trump insisted he had innate talent for this mission. “Some people have an ability to negotiate,” he said. “It’s an art you’re basically born with. You either have it or you don’t.” Trump claimed he would know exactly what to demand of the Russians—though that would have to remain a secret for the time being. He was undaunted by his lack of experience in the technical field of nuclear weaponry: “It would take an hour-and-a-half to learn everything there is to learn about missiles…I think I know most of it anyway. You’re talking about just getting updated on a situation…You know who really wants me to do this? Roy…I’d do it in a second.”

A few months earlier,  Trump had expressed the same sentiment to a New York Times reporter penning a profile of him:

The football thing [his ownership of a team in a new upstart league] is cute, Trump Tower and the piano and all of that, it’s all cute, but what does it mean? [Trump] says, sounding what borders on a note of uncharacteristic despair.

Asked to explain, he adds: What does it all mean when some wacko over in Syria can end the world with nuclear weapons?

He says that his concern for nuclear holocaust is not one that popped into his mind during any recent made of-television. He says that it has been troubling him since his uncle, a nuclear physicist, began talking to him about it 15 years ago.

His greatest dream is to personally do something about the problem and, characteristically, Donald Trump thinks he has an answer to nuclear armament: Let him negotiate arms agreements—he who can talk people into selling $100 million properties to him for $13 million. Negotiations is an art, he says and I have a gift for it.

Trump’s remarks to these reporters were not just a gimmick cooked up to impress the scribblers. Trump apparently truly believed that he could parachute in and land a great deal with the Soviets. He took steps two years later to make this happen. In 1986, according to Bernard Lown, a cardiologist who invented the defibrillator and who received the 1985 Nobel Peace Prize for joining with a prominent Soviet physician to promote nuclear arms reduction, Trump met with him to discuss nuclear weapons. Lown recently told the Hollywood Reporter that Trump informed him at that meeting that he would be pushing President Ronald Reagan to appoint him to concoct a nuclear disarmament deal with the Soviet Union. Lown recounted the conversation:

[Trump] said to me, “I hear you met with Gorbachev, and you had a long interview with him, and you’re a doctor, so you have a good assessment of who he is.” So I asked, “Why would you want to know?” And he responded, “I intend to call my good friend Ronnie,” meaning Reagan, “to make me a plenipotentiary ambassador for the United States with Gorbachev.” Those are the words he used. And he said he would go to Moscow and he’d sit down with Gorbachev, and then he took his thumb and he hit the desk and he said, “And within one hour the Cold War would be over!” I sat there dumbfounded. “Who is this self-inflated individual? Is he sane or what?”

Trump, of course, never landed that job. But he continued to think and talk about nuclear weapons—often voicing a fatalistic approach, as if he believed nuclear conflagration was unavoidable. During a 1990 interview with Playboy, Trump was asked to describe his “longer-term views of the future.” Trump answered, “I think of the future, but I refuse to paint it. Anything can happen. But I often think of nuclear war.”

I’ve always thought about the issue of nuclear war; it’s a very important element in my thought process. It’s the ultimate, the ultimate catastrophe, the biggest problem this world has, and nobody’s focusing on the nuts and bolts of it. It’s a little like sickness. People don’t believe they’re going to get sick until they do. Nobody wants to talk about it. I believe the greatest of all stupidities is people’s believing it will never happen, because everybody knows how destructive it will be, so nobody uses weapons. What bullshit…It’s like thinking the Titanic can’t sink. Too many countries have nuclear weapons; nobody knows where they’re all pointed, what button it takes to launch them.

The bomb Harry Truman dropped on Hiroshima was a toy next to today’s. We have thousands of weapons pointed at us and nobody even knows if they’re going to go in the right direction. They’ve never really been tested. These jerks in charge don’t know how to paint a wall, and we’re relying on them to shoot nuclear missiles to Moscow. What happens if they don’t go there? What happens if our computer systems aren’t working? Nobody knows if this equipment works, and I’ve seen numerous reports lately stating that the probability is they don’t work. It’s a total mess.

Trump pushed on with his notion that nuclear annihilation could be on the horizon:

Oh absolutely. I mean, I think it’s sick human nature. If Hitler had the bomb, you don’t think he would have used it? He would have put the bomb right in the middle of Fifth Avenue. He would have used Trump Tower, 57th and Fifth. Boom. I mean, you have people that are sick and they are now having nuclear arsenals, and I think it’s one of the greatest problems of the world…So it’s always tough to say—I mean I like to project for the future but really live very much for the present. And I like to learn from the past, but it’s very very fragile, life is so fragile.

In another Playboy interview—this one in 2004—Trump again doled out the nuclear despondency. He was asked, “Do you think Trump Tower and your other buildings will bear your name a hundred years from now?” Trump responded:

The interviewer responded, “That’s frightening.” And Trump said, “You don’t agree?” He continued:

I had an uncle who was a great professor and a brilliant man—Dr. John Trump, a professor at the Massachusetts Institute of Technology. His whole life was devoted to the study and eradication of cancer, and sadly, he died of cancer. But he was a brilliant scientist, and he would tell me weapons are getting so powerful today that humanity is in tremendous trouble. This was 25 years ago, but he was right. The world is rocky, and some terrible things are going to happen. That’s why I lead the life I do. I enjoy it. I know life is fragile, and if the world looks like this a hundred years from now, we’ll either be very lucky or have found unbelievably good leaders somewhere down the line.

It’s clear: Trump has been fretting about nuclear destruction for many years. But for all his concern, he seemingly has not done much to educate himself on the weighty subject. During the presidential campaign, he uttered several troubling comments about nuclear arms. At a Republican primary debate, he botched a question about the nuclear triad—a sign he did not understand the most basic information about the structure of the US nuclear command. As a candidate, Trump noted that he would support allowing Japan, South Korea, and Saudi Arabia to obtain nuclear weapons—that is, he was advocating nuclear proliferation—and that he would be open to using the ultimate weapons against ISIS and in other conflicts. He asserted that when it came to national security, he had “a very good brain.”

These days, his cavalier talk of “fire and fury” in response to Kim Jong-un’s reckless remarks about Pyongyang’s nuclear weapons show that Trump doesn’t bother to consider the difficult and vexing nuances of nuclear diplomacy. (Attack North Korea, and North Korea could well destroy Seoul with or without nuclear weapons.) Since the days of the Cold War, Trump has repeatedly signaled that he fears that nuclear war may be inescapable but that he also believes nuclear policy is an easy matter to master. At least for him. Each of these notions is frightening. Together, they can be terrifying.