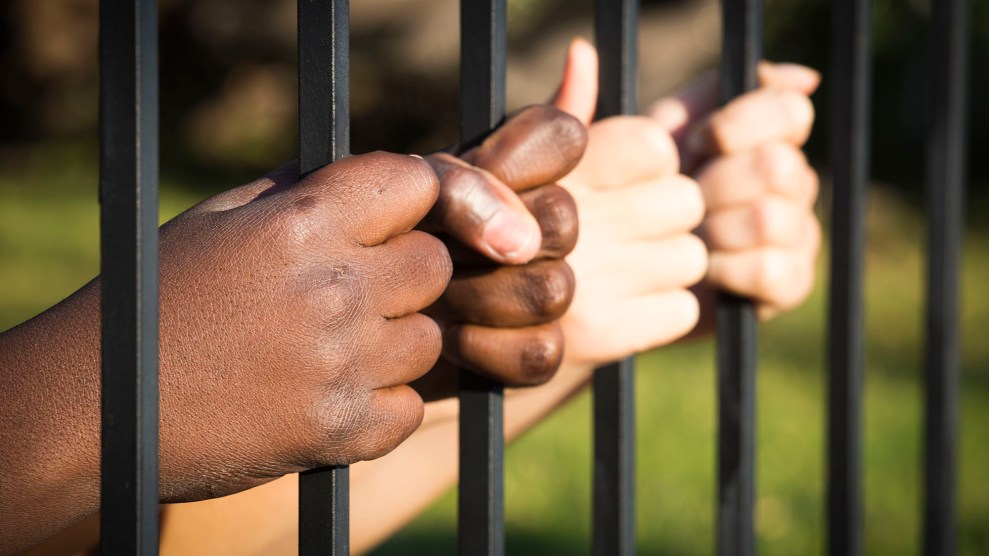 Since 2001, the number of kids in detention has dropped by more than half across the country—a seemingly decisive victory for juvenile-justice reformers. But digging into the numbers reveals a much bleaker picture. Recently released data from the Justice Department shows that black juveniles are five times likelier than white juveniles to be locked up. It’s not exactly a new phenomenon, but it’s a worsening one.

The gap between black and white juvenile detention grew more than 20 percent from 2001 to 2015, according to the Sentencing Project, a criminal justice advocacy group that crunched the new data in a report out this week. As of 2015, about 44 percent of all kids in custody were black, even though African Americans make up just 16 percent of the total youth population in the United States.

Black youths are more likely to be locked up in 49 states—all but Hawaii—though the racial gap is worse in some states than it is in others: In New Jersey, Wisconsin, Montana, Delaware, Connecticut, and Massachusetts, black kids are at least 10 times as likely to be held in custody as white kids.

“The disparity exists because of differences in how young people of color are treated at every point of contact with the justice system, but the growth of the incarceration disparity is likely due to growing disparities in arrests, which feeds the rest of the system,” Joshua Rovner, who studies juvenile justice at the Sentencing Project, tells Mother Jones.
Black kids are more than twice as likely as white kids to be arrested. But that’s not because black kids are committing so many more crimes; the data proves they’re not. “Black and white youth are roughly as likely to get into fights, carry weapons, steal property, use and sell illicit substances, and commit status offenses, like skipping school,” the Sentencing Project found in a report last year.
Still, slight behavioral differences do exist—white high school students are more likely to carry weapons or drink underage, while black students are more likely to smoke weed or get into fights, according to the Centers for Disease Control and Prevention. But they don’t explain the vast differences in arrest rates: In the CDC study, a third of black students had gotten into a fight, compared with a fifth of white students. Yet the Justice Department data shows that black youths are about 300 percent more likely than white youths to be arrested for simple assault.
“The disparity is driven by the way that adults respond to those behaviors,” says Rovner. Kids of color are more likely than white kids to go to schools with school resource officers, who provide security and also have the ability to make arrests. And cops are more likely to patrol neighborhoods where black kids live, Rovner adds. “In an era of racial segregation, especially residential segregation, black youths’ lives are surrounded by police officers, and their teenaged mistakes are more likely to land in the juvenile justice system,” says Rovner. “White youth’s mistakes are not.”