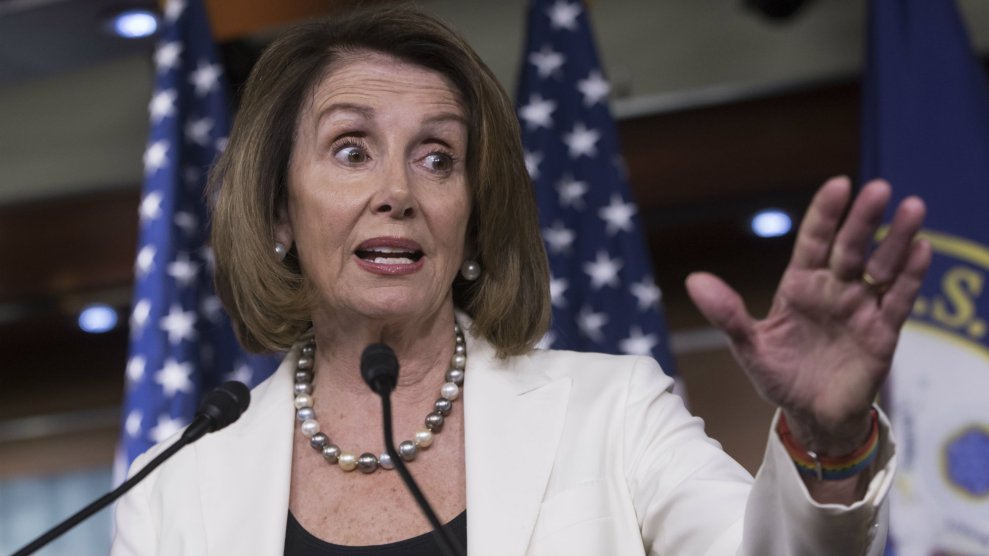 In addition to ensuring recipients of the Deferred Action for Childhood Arrivals program can stay in the country, Trump’s apparent agreement to work with Democrats reportedly includes tougher border security measures, something immigration advocates say is a non-starter. No concrete details have yet been released about the deal-in-the-works, and the president himself has offered contradictory statements on whether an agreement has been reached at all.

“We undocumented youth will not be a bargaining chip for Trump’s xenophobic agenda,” the protesters shouted at Monday’s press conference. They repeatedly called the minority leader a “liar.”

Half an hour after the press conference started, Pelosi left. “Since you don’t want to listen, we’ll have to just go,” she said.

Dreamer protesters have disrupted a Pelosi presser in CA, asking for protections for Dreamer & their parents: https://t.co/o3zGNJvblL

The protest comes after Pelosi and Senate Minority Leader Chuck Schumer (D-N.Y.) announced the agreement last week. Before activists interrupted her, Pelosi said any deal entered into by the Democrats should include an avenue for immigrants brought to the U.S. before turning 16 to stay permanently, ideally through a path to citizenship. The Trump administration has said it’s not willing to do that for the estimated 1.1 million Dreamers who might be eligible. Pelosi was joined by Barbara Lee and Jared Huffman, other representatives from California, in calling for the passage of the Dream Act.

But activists say tougher border security measures amount to a crackdown on immigrants already in the U.S. “It is unconscionable that we would accept any deal that essentially trades our safety for that of the safety of our family members and neighbors,” Itzel Guillen, who works with the Southern Border Communities Coalition, said in a statement. “Our communities are already hyper-militarized, with unaccountable border agents patrolling our communities and asking people for their papers at any time and for any reason.”

Other immigration activists, such as Daniel Altschuler with a group called Make the Road New York, are saying Democrats are trading away far too much by already conceding to upping border security.

Let me get this straight: Schumer + Pelosi just went to White House to negotiate and made a #DACA deal that's basically Paul Ryan's plan? 🤔🤔

You can watch the full video of the protest below: