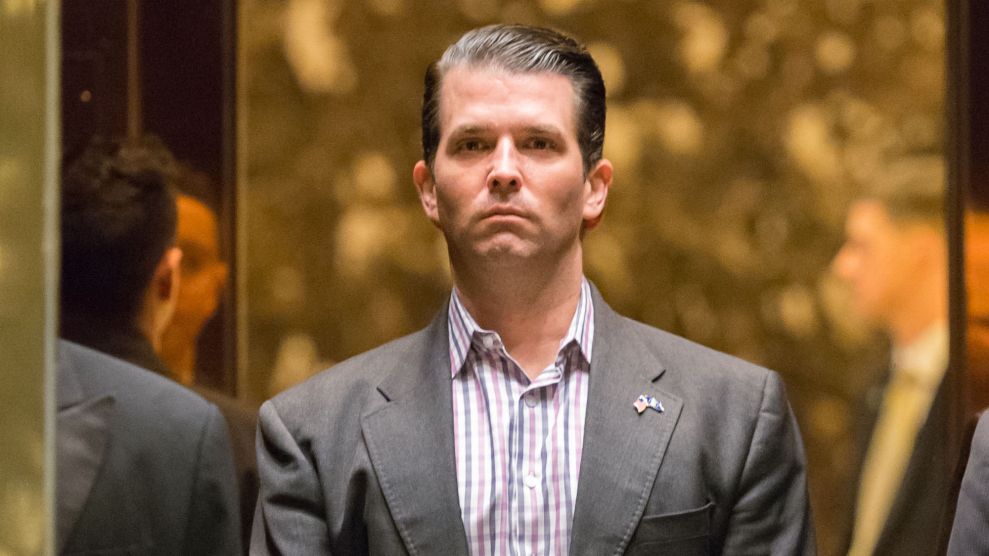 On Thursday morning, the Senate Judiciary Committee had a big get: Donald Trump Jr. entered the Capitol under cover and sat down with committee investigators probing the Trump-Russia scandal. The main focus of the gumshoes was the June 2016 meeting that Trump Jr., Jared Kushner, and Paul Manafort held with a Russian emissary who they were told would be dishing dirt on Hillary Clinton as part of a Kremlin effort to help Donald Trump win the presidency. When the story of the get-together broke this July, Trump Jr. gave conflicting—and false—accounts of the meeting, before he eventually disclosed emails revealing its true purpose, just as the New York Times was about to post an article on the emails. Now it seems Trump Jr. is still trying to spin his way out of a jam that shows the Trump campaign did seek to collude with Vladimir Putin’s regime.

As Trump Jr. was being questioned by congressional investigators, the New York Times published a story quoting from his prepared opening statement. And several of Trump Jr.’s assertions in that statement conflict with the emails related to the meeting.

Trump insisted in the statement that he was initially conflicted when he heard that the Russians might have derogatory information about a Clinton lawyer and that he intended to consult with his own lawyers about the propriety of using any such material. But the emails show that after Trump Jr. was first contacted by Rob Goldstone, the manager for Azerbaijani pop singer Emin Agalarov (whose father, the billionaire developer Aras Agalarov, partnered with Donald Trump to host Miss Universe in Moscow in 2013), and told that the Russian government wanted to help Trump secretly by sharing dirt it had on Clinton, the younger Trump enthusiastically replied, “I love it.”

Without knowing what the material was, Trump Jr. signaled to Goldstone he was eager to use such opposition research “later in the summer,” when the presidential campaign was further along. There was not a hint that he possessed reservations and would need to consult with attorneys before deploying this oppo.

“To the extent [the Russians] had information concerning the fitness, character or qualifications of a presidential candidate, I believed that I should at least hear them out,” Trump Jr. said in his statement. But he was already thinking about the ideal time to release the damaging information.

According to the Times, Trump Jr. described his decision to hold this meeting as a byproduct of the chaotic, seat-of-the-pants Trump campaign, dismissing the notion this was an attempt to collude with Russia. He noted in the statement, “I had never worked on a campaign before and it was an exhausting, all-encompassing, life-changing experience. Every single day I fielded dozens, if not hundreds, of emails and phone calls.”

The emails belie this characterization. Goldstone clearly reported what was at hand. The subject heading of the emails on the subject was plain: “Russia – Clinton – private and confidential.” Goldstone spelled out that this matter involved “very high level and sensitive information” that was “part of Russia and its government’s support for Mr. Trump.” It seems improbable that Trump Jr. missed what was truly going on because of all the campaign hurly-burly.

Trump also made it seem that he stumbled into the meeting practically by accident: “Since I had no additional information to validate what Rob [Goldstone] was saying, I did not quite know what to make of his email. I had no way to gauge the reliability, credibility or accuracy of any of the things he was saying.”

But according to the emails, Trump Jr. did take steps to evaluate what Goldstone had told him. There were a series of exchanges in which Trump Jr. told Goldstone he wanted to talk with Emin Agalarov to discuss this plot. The Trumps knew the younger Agalarov well. In addition to being a pop star, he was an executive in his father’s real estate firm, and following the Miss Universe contest, the Trumps and Agalarovs had pursued a project to build a Trump Tower in Moscow. (The venture ended up fizzling.) So it made sense for Trump Jr. to want to hear directly from Emin about this Russian scheme to help his dad in the election.

The emails show Trump Jr. trying to connect with Emin, and they suggest the two did speak. The message chain does not directly convey what was said during that exchange. But a day after Trump Jr. reached out to Emin, Goldstone emailed Trump Jr. and wrote, “Emin asked that I schedule a meeting with you and the Russian government attorney who is flying over from Moscow for this Thursday.”

A reasonable reading of the emails is that Trump Jr., after receiving the initial Goldstone email offering Russian government information on Clinton, checked with Emin Agalarov and then proceeded to schedule a meeting, to which he invited Kushner and Manafort. Including these two Trump campaign heavyweights in the session was another sign that Trump Jr. believed this was a serious endeavor. This undermines his claim the meeting came about due to chaos and inexperience.

Trump Jr.’s statement is an indication he is not playing it straight. That’s not a shocker. He and the Trump crew denied for a year there was any collusion with Russia before this meeting became public. And whether or not the session yielded any ammo to use against Clinton, the emails about the meeting—which were shared with Kushner and Manafort—show that Trump’s top advisers were informed the Kremlin was aiming to help Trump covertly. Yet in the months following the meeting—after the Russian hacking of Democratic targets was revealed—Trump and his campaign advisers stridently denied Moscow was meddling in the election. This was only one of several untruths Trump and his lieutenants have repeatedly told about the Russia scandal.

Presumably, the congressional investigators will be able to spot the self-serving misrepresentations in Trump Jr.’s story. At the very least, they should know that by this point, nothing a Trump says about Russia should be accepted at face value.