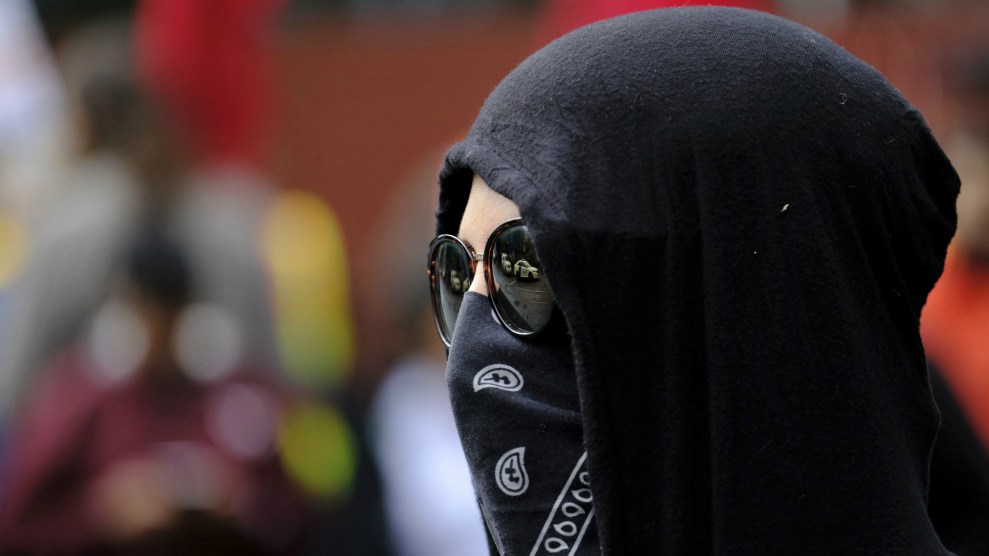 Over the past year of clashes between “alt-right” and left-wing protesters and an escalating debate over violence as the means to an end, the word “masked” has become an epithet of sorts to describe protesters on the left.

Last month in famously liberal Berkeley, California, where right-wingers have been planning rallies that seem intended to stir up raucous counterprotests—and which have drawn hundreds of masked opponents—city leaders passed an ordinance allowing the city manager to set ground rules as to what kinds of items cannot be worn or carried into protest areas. Masks and other face coverings have been banned at every local demonstration since.

These rules haven’t thwarted antifa, a loose-knit network of groups and individuals who aim to confront—sometimes violently—people they identify as fascists. On August 27 in Berkeley, more than 100 antifa protesters clad in various configurations of black hoodies, bandanas, hats, and sunglasses—and some carrying heavy poles or shields—ignored the city ordinance and marched en masse to Civic Center Park, where a handful of right-wingers had made sporadic appearances during the day.

By day’s end, at least one participant had been arrested for wearing a mask—or, rather, a purple bandana. (She was later charged with resisting arrest and assaulting a police officer, after allegedly throwing an apple at a local officer and using a “large German Shepherd”—her service dog—to evade capture.) And police officers detained several others for covering their faces.

With mask-clad antifa members continuing to show up at right-wing events in Berkeley and elsewhere, we decided to look a bit deeper into the use of masks as a tactic, past and present, and the legality of banning them. Here’s what we found.

Is Berkeley the first place to ban masks?

No. At least 18 states, and various smaller jurisdictions, have anti-masking laws on the books. The earliest, a New York state law that dates back to 1845, was passed in response to farmer uprisings—in particular a clash between a landowner and some farmer-tenants he sought to evict. The farmers reportedly “disguised themselves as ‘Indians,’ dressed in ‘calico gowns and leather masks’ and attacked agents of the landlords,” tar-and-feathering them, according to court documents. The very same law would later be used to arrest and charge Occupy Wall Street activists wearing bandanas and Guy Fawkes masks in New York City’s Zuccotti Park.

Most of the other state anti-masking laws were enacted between the 1920s and the early 1960s—the late Jim Crow era. Almost all were aimed at preventing Ku Klux Klansmen from concealing their identities while terrorizing, intimidating, or otherwise harassing various minority communities. Most of the laws explicitly reference “hoods” in addition to masks, and some get even more specific: Ohio’s 1953 law bans “white caps, masks, or other disguise.” (Two Klan members lobbied against the Ohio ban, claiming it was discriminatory.)

Some of the anti-Klan laws, including those enacted in Florida (1951) and North Carolina (1953), apply to any individual, while laws in Ohio and Delaware, for instance, cover gatherings of more than two or three people. In most cases, though, wearing a mask is only deemed illegal if the person is committing another crime or impinging on someone else’s constitutional rights. (DC’s 1981 law, for example, applies only in instances of intentional intimidation.) Alabama (1949), Florida, and North Carolina ban the wearing of masks in any public place, period. Minnesota‘s law (1963) makes exceptions for reasons of health and religious observance.

Are these laws constitutional?

The courts have been divided over the legality of anti-mask laws, some of which Klan members have challenged in court on the grounds that they obstruct free speech and assembly rights. Courts have upheld some of the laws and struck down others, citing the First Amendment or the Fourteenth—the one that guarantees every American equal protection under the law.

In 1990, the Georgia Supreme Court upheld that state’s 1951 anti-mask law, overturning a lower court’s ruling that it impinged on free speech of KKK members. (The lower court called the Klan a “persecuted group.”) The high court held that the Klan’s “history of anonymous violence makes the mask a form of intimidation subject to government control,” according to the New York Times.

Nine years later, however, a federal district court in Indiana ruled in favor of the Klan, striking down an anti-mask ordinance in the city of Goshen. “There is an undeniable irony in today’s holding. More than a century ago, the Ku Klux Klan wore masks to terrorize persons they wanted to drive from their communities. Today, the Klan’s descendant organization uses its masks to conceal the identities of those who hold ideas the community wishes to drive off,” a federal judge wrote.

Very few of the existing laws contain exemptions for religion or health, and some have been challenged on those grounds as well. In 2000, a state senator proposed an amendment to Georgia’s law that would allow face coverings for both reasons, but it didn’t pass. (That law became a subject of controversy last year, after a Georgia State University professor cited it while asking a Muslim student to remove her niqab.

How did masks become an antifa thing?

Mark Bray, an anti-fascism scholar at Dartmouth College, points to the first black bloc protests in Germany during the 1980s, when left-wing militants known as Autonomen donned balaclavas, motorcycle helmets, and all-black gear for protests against nuclear power and actions to defend squatters from eviction. The tactic gained prominence after the fall of the Berlin Wall in 1989, when the Autonomen expanded their activities to counter a surge of Nazi violence in post-Communist Germany. Their reasons for covering up were much the same as for today’s antifa, Bray says: to prevent their identification by police. “It was a way to be at least somewhat anonymous in a large group doing something militant and sometimes illegal,” Bray says. “Sometimes confronting the police, sometimes engaging in targeted property destruction.”

The masking tactic spread across Europe and North America, featuring prominently in the 1999 World Trade Organization protests in Seattle and later in the Occupy movement. While Seattle doesn’t have an anti-mask law, Washington state lawmakers are considering a bill that would ban masking by any individual in public spaces or in private spaces frequented by the public—banks and retail stores, for example. The bill contains exceptions for religious observance or celebrations (such as Halloween). But it does not make an exception for health or safety purposes.

Aren’t these mask-wearers just trying to get away with doing illegal stuff?

Some are. But many anti-fascists believe police will target them for arrest regardless of whether they’ve done anything illegal, Bray says. The somewhat recent threat of doxing—posting someone’s personal information online, often after identifying them in a photograph of a protest—has pushed more protesters to hide their faces. “Those who have been doxed, their employers have been contacted, their families have been threatened, sometimes people come to their houses,” Bray says, recalling the story of one Danish anti-fascist who decided to speak publicly about his activism and the next month was assaulted multiple times.

One street medic, an electrical industry employee who has participated in multiple antifa protests in Berkeley, says he wears a mask because he fears being doxed might put his life or his family’s well-being in jeopardy. “In my field of work, ‘accidents’ can happen,” he says. “Someone can flip a switch and electrocute me, or drop a heavy object above me or impale me with a forklift…If I were to be recognized in a picture or video assisting a counterprotester or defending someone under attack or standing against fascism, it would increase my personal risk.”

Are there other legitimate reasons for wearing a mask to a protest?

At the August 27 Berkeley protest, volunteers distributed surgical masks in first-aid kits to protesters as protection from pepper spray and teargas—both of which were deployed over the course of the day. (Our colleague Shane Bauer got it right in the face.) Yet paper masks really won’t do much to stop these chemicals—especially with a direct hit. That’s according to John Georgiadis, a professor of biomedical engineering at the Illinois Institute of Technology. Teargas and pepper spray molecules can pass easily through the pores in paper and onto the skin and other bodily membranes, where they destroy the top layer of cells. This is most painful in the eyes, mouth, nose, and throat, where nerves are close to the surface, Georgiadis says.

The best bet for dealing with crowd-control chemicals is a full-on gas mask like the ones police don before firing off tear gas canisters. These masks work by forcing air through an intricately folded membrane coated in sticky carbon fibers, a technique first developed by the British during World War I. As the molecules of gas or pepper spray move through the filter, they bump up against the porous carbon and get stuck, Georgiadis explains. Breathable air moves through more freely.

He adds that a dry bandana or scarf over the nose and mouth allows protesters to breathe while reducing the amount of the chemicals they inhale. But very few jurisdictions with anti-masking laws make exceptions for health reasons. (Virginia does, but only if the protester carries a signed doctor’s note.)

Do all anti-fascists wear masks?

The decision to mask up depends on the goals and the context of the protest, Bray says. Some antifa groups hide their faces only when they anticipate violence, or when they’re in large enough groups that masks provide true anonymity. Sometimes the decision is based on the need to do outreach: Antifasicstas in Madrid leave their balaclavas home for peaceful marches, according to Bray, while organizations like Redneck Revolt or the “general defense committees” of the Industrial Workers of the World eschew masks altogether because part of the groups’ goal is to connect with nonradicals.

The Berkeley street medic who was worried about getting doxed says he’s still torn about whether wearing a mask is the right call. “I realize that it makes some people uncomfortable, people that I would like to have as allies,” he says. Bray, too, notes that masks may alienate people who would otherwise be sympathetic to the cause. But PR tends not to be a big priority for antifa. “Black bloc attire also has a strong visual impact of solidarity and force,” the medic says. “It can be intimidating, and I do not think that is necessarily a negative thing. I want Nazis to fear the consequences of their violent and sometimes lethal behavior.”