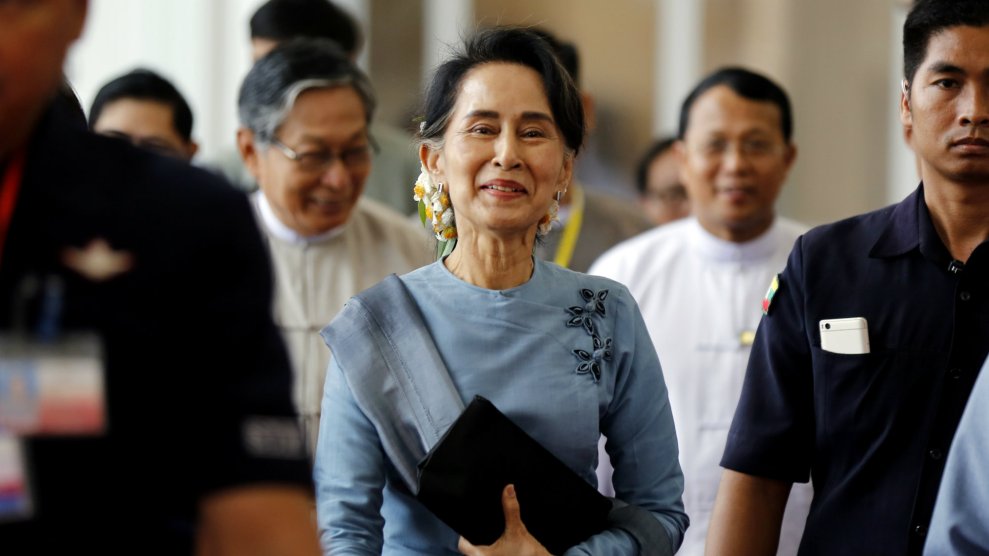 Nobel Peace Prize laureate and internationally renowned human rights advocate Aung San Suu Kyi is facing sharp criticism for her remarks Tuesday on the crisis in Burma, a military massacre that has been described by the top United Nations human right official as “a textbook example of ethnic cleansing.” As of early September, the death toll was believed to be around 1,000, and hundreds of thousands of people have fled the country, which is also known as Myanmar.

Suu Kyi uses "exodus" to describe Rohingya. That's misleading. The truth = this is genocide & she is responsible. pic.twitter.com/inGUrG8lms

“As a responsible member of the community of nations, Myanmar does not fear international scrutiny,” Suu Kyi, the leader of the country’s ruling party, said during her first public remarks on the violence plaguing the western state of Arakan, also known as Rakhine.

Her remarks come as more than 400,000 members of the Rohingya ethnic group, a Muslim minority long oppressed by the country’s Buddhist majority, have fled to Bangladesh for safety since late August. Bangladeshi officials say land mines have been planted on the the Burma side of the border and refugees who have escaped are living in camps that lack adequate food and medical aid.

Suu Kyi decided not to attend the UN General Assembly this week, giving her controversial address early this morning from Naypyidaw, the capital of Burma (also known as Myanmar). During her speech, she claimed she didn’t know why the Rohingya were fleeing.

Amnesty International denounced her comments as a “mix of untruths and victim-blaming.” “There is overwhelming evidence that security forces are engaged in a campaign of ethnic cleansing through murder and forced displacement,” James Gomez, the group’s regional director for Southeast Asia and the Pacific, said in a statement. “While it was positive to hear Aung San Suu Kyi condemn human rights violations in Rakhine state, she is still silent about the role of the security forces in this.”

Aung San Suu Kyi & her government are burying their heads in the sand over the horrors unfolding in Rakhine State: https://t.co/VRCOMqEmmq pic.twitter.com/xyU208sj5Y

Earlier this week, Human Rights Watch released satellite evidence showing that more than 210 villages have been burned to the ground in western Burma since the violence kicked off in late August.

“While Aung San Suu Kyi may not have the power or authority to rein in the Burmese military, she can speak out and also ensure the UN Fact-Finding Mission is able to enter Burma,” Phil Robertson, deputy Asia director at Human Rights Watch, said in a statement. “Concerned governments should not wait for her to act. They should impose targeted sanctions on those most responsible for the terrible atrocities taking place.”