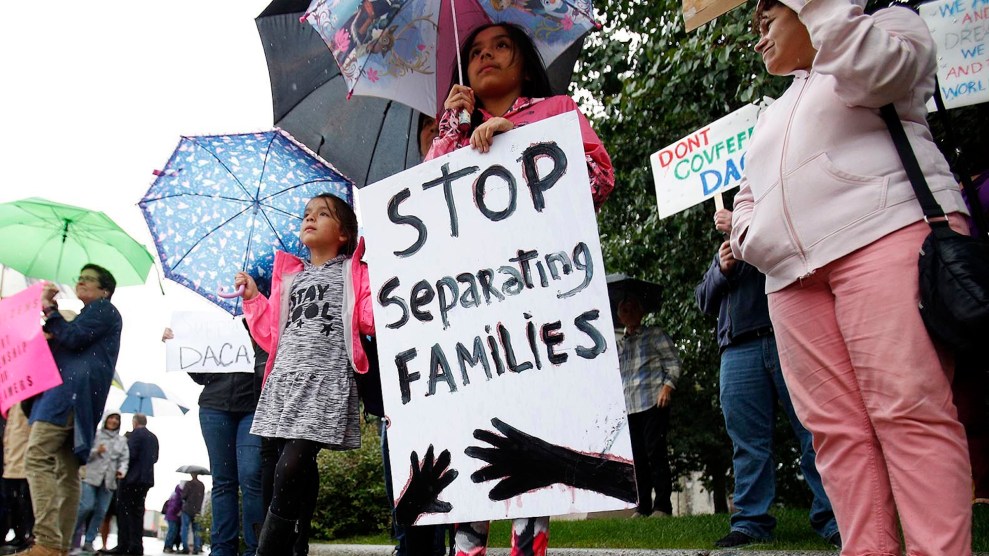 April Soasti, 9, front, and her sister Adriana, 7, stand with other community members after the Trump administration announced it was ending Deferred Action for Childhood Arrivals (DACA.)Stephanie Zollshan/AP

By October 5, roughly 150,000 young undocumented immigrants across the country, known as Dreamers, have to come up with $495 to renew their two-year work and study permits under the Deferred Action for Childhood Arrivals (DACA) program. On Monday, Rhode Island’s Democratic governor Gina Raimondo announced that no Dreamers in her state will have to pay that fee.

After working with individual donors and organizations, Raimondo has secured more than $170,000 to cover applications from the state’s Dreamers—about 250 individuals, according to the Providence Journal—meaning these young men and women will be protected from deportation for an additional two-years. “We’re not going to allow $495 to stand in the way of our neighbors’ dreams,” Raimondo said in a press release. “Now is the time to fight for our values and take action against hate and bigotry.”

Institutions and immigration-advocacy groups are also working to help Dreamers elsewhere cover their renewal fees. Last week, the Mission Asset Fund, a San Francisco-based nonprofit, announced it will provide $1 million to help about 2,000 Dreamers renew their permits. Half of the funds will be reserved for California college students. United We Dream, a youth-led immigration advocacy group, meanwhile announced the creation of a “DACA Renewal Fund” last week.

Under the terms recently set by the Trump administration, DACA recipients whose permits expire before March 5, 2018 are eligible to apply for a final two-year renewal, but they must do so before October 5. Before Trump decided to end the Obama-era program earlier this month, Dreamers could apply for an unlimited number of renewals.

Immigration advocates have criticized the Trump administration for forcing Dreamers to come up with $495 on short notice. At a hearing last week, District Judge Nicholas Garaufis questioned the need for the October 5 deadline. The only people harmed by it, he said, are the “800,000 people who are sweating that someone will knock on their door and send them to a country they don’t even know with a language they don’t speak.”

A lawyer for the Justice Department said that the government was still considering changing the deadline. If it doesn’t, Garaufis may force them to do so through a court order. In the meantime, Dreamers in Rhode Island will find some relief.