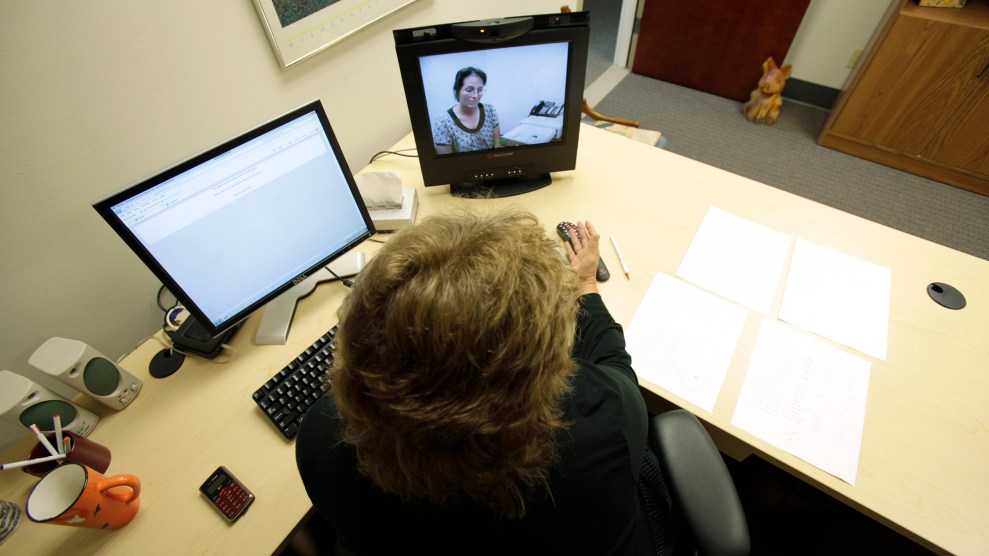 A doctor in Des Moines, Iowa, and a nurse in a clinic in another city demonstrate a telemedicine program through which doctors can remotely prescribe the abortion-inducing drug RU-486. Charlie Neibergall/AP

In order to be prescribed abortion-inducing medication, pregnant women are usually required to have an in-person appointment with a doctor who administers the drugs. In rural places, that can be difficult: Many women must drive for hours to the nearest abortion clinic. One promising solution to this problem is telemedicine, where a doctor meets with the patient via video conference at an office close to the patient’s home. A new study found that these virtual abortion-pill procedures are just as safe as the in-person versions.

The researchers found that the program increased access to early abortion for Iowa women, meaning there were fewer abortions at later gestational terms.

This conclusion comes after seven years of examining a telemedicine program in Iowa Planned Parenthood clinics. University of California-San Francisco researchers analyzed 8,765 medical abortions that were performed by telemedicine and 10,405 that were done in an in-person visit. Overall, 0.18 percent of the telemedicine patients experienced a complication compared with 0.32 percent of in-person patients.

The UCSF researchers also found that the program increased access to early abortion for Iowa women, meaning there were fewer abortions at later gestational terms. A prior study from the same group showed that women who used telemedicine for their abortion procedure were more likely to recommend that method to a friend and generally had a very high rate of satisfaction. The program persisted, despite a hostile political climate: In 2015, when the telemedicine program was specifically targeted in Iowa’s Republican-led state legislature, a measure that required physicians to administer the drugs in person was struck down by the Iowa Supreme Court.

18 states currently ban using telemedicine for abortion, citing safety concerns. Yet complications in abortion procedures—in-person or virtual—are extremely rare. A 2014 study by the same UCSF researchers concluded that they occur at about the same rate as complications from a standard colonoscopy. Dr. Daniel Grossman, lead author of the study, noted that the risk of death is 14 times higher and the risk of needing a blood transfusion is 10 times higher for women who choose to carry a pregnancy to term. “The reality is that pregnancy is dangerous,” Grossman said. “I think it’s very important to put these risks in context.”

Grossman said the fact that in-person abortions had a slightly higher complication rate than telemedicine abortions was not “statistically significant” for the sample size but “there definitely seems to be a trend.”

“It’s something to examine moving forward,” he said. “Maybe the in-person patients are getting some unnecessary medical intervention, maybe a blood transfusion when they don’t really need it…as a precaution.”