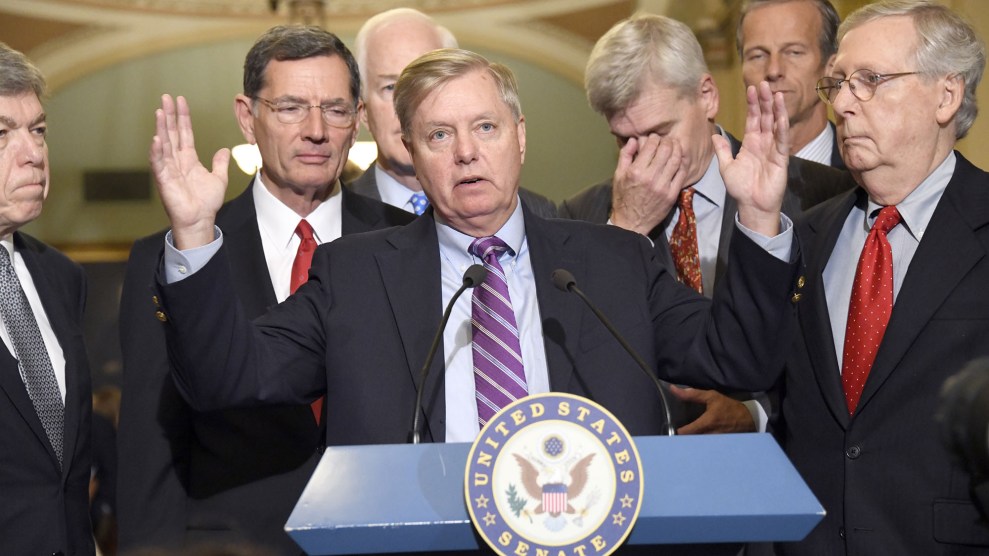 Sen. Lindsey Graham speaks to reporters outside the US Senate chamber.Ron Sachs/ZUMA

Surprise! If it manages to pass despite Sen. John McCain’s defection, the latest GOP effort to repeal Obamacare would likely result in an additional 21 million Americans without health insurance. That’s according to a new study by the Brookings Institution. And within a few years, the study found, the coverage gap would grow to more than 30 million people.

The latest health bill, which, for procedural reasons, Senate Republicans have to pass by September 30, would convert the subsidies Obamacare provides to help low- and middle-income families buy insurance into block grants that states can use however they want—although the amounts the states receive would eventually be far less than what was expended under Obamacare.

The so-called Graham-Cassidy bill, named after the two Republican senators who introduced it, would also end Obamacare’s expansion of Medicaid to millions of low-income families. In addition, Graham-Cassidy would place a per-capita cap on traditional Medicaid, greatly reducing federal health care expenditures. According to health industry analysts, the bill would create chaos, as each state attempted to set up its own complex insurance market, and to do so with far less money available to help struggling people get coverage.

Normally, Congress would delay voting on such a package until after the nonpartisan Congressional Budget Office is able to “score” the legislation—analyze it and report back on the bill’s likely human and economic impacts. Whether by design or accident, in this case the authors waited until the last minute to release the text of the proposed legislation. The CBO says it will only have time to assess the bill’s budgetary impacts before the September 30 deadline, but won’t be able to reach a firm conclusion on how the bill will affect the number of people with insurance. This lack of clarity has allowed the bill’s authors to make the media rounds and flat-out lie about the bill’s likely effects.

Without the CBO score, Americans are left to rely on outside analysis such as the new Brookings study. But as Brookings notes in its report, there’s lots of information to be gleaned from past CBO reports, since much of Graham-Cassidy bill is a patchwork of other proposals put forth by Republicans this year. Taking away the individual mandate would quickly result in 15 million fewer people being insured. By 2020, Brookings estimates, roughly 21 million fewer people would have insurance if Graham-Cassidy passes. “These estimates are, of course, subject to considerable uncertainty, most importantly because predicting how states would respond to the dramatic changes in the policy environment under the Graham-Cassidy proposal is very challenging,” the report notes. “What is clear, however, is that the legislation would result in very large reductions in insurance coverage.”

Things get even more dire after 2026. That’s when Graham-Cassidy eliminates the block grants to states, leaving them to fend for themselves if they want to help low- and middle-income families keep their coverage. Brookings used the CBO’s prior assessment of the impact of repealing Obamacare as the basis for its post-2026 estimate: Swapping Obamacare for Graham-Cassidy would leave 32 million more people without insurance.

But all of this number-crunching may not matter in the end. On Friday afternoon, McCain announced he could not “in good conscience” vote for the new bill, despite his close friendship with one of its authors. McCain’s opposition means Senate Majority Leader Mitch McConnell will be hard pressed to find the votes he needs to get Graham-Cassidy through the Senate.