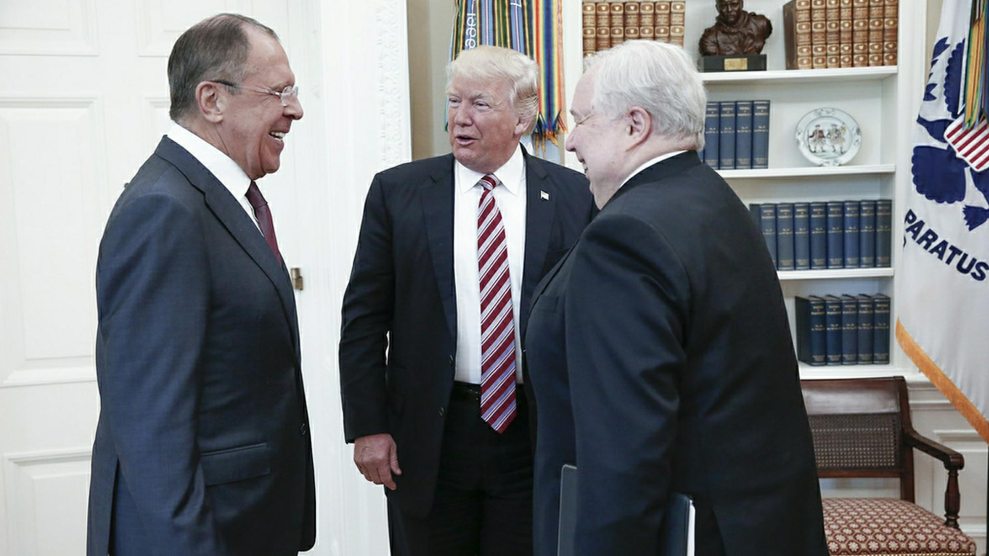 Trump in the Oval Office with Russian foreign minister Sergei Lavrov (L) and then-ambassador Sergey Kislyak in May 2017. The Ministry Of Foreign Affairs/Zuma

Robert Mueller, the special counsel leading the investigation into possible collusion between Donald Trump’s campaign and Russia during the 2016 election, has requested documents from the White House related to the president’s actions since taking office. The New York Times reports:

Robert S. Mueller III, the special counsel, has asked the White House for documents about some of President Trump’s most scrutinized actions since taking office, including the firing of his national security adviser and F.B.I. director, according to White House officials.

Mr. Mueller is also interested in an Oval Office meeting Mr. Trump had with Russian officials in which he said the dismissal of the F.B.I. director had relieved “great pressure” on him.

The document requests provide the most details to date about the breadth of Mr. Mueller’s investigation, and show that several aspects of his inquiry are focused squarely on Mr. Trump’s behavior in the White House.

In recent weeks, Mr. Mueller’s office sent a document to the White House that detailed 13 different areas that investigators want more information about. Since then, administration lawyers have been scouring White House emails and asking officials whether they have other documents or notes that may pertain to Mr. Mueller’s requests.