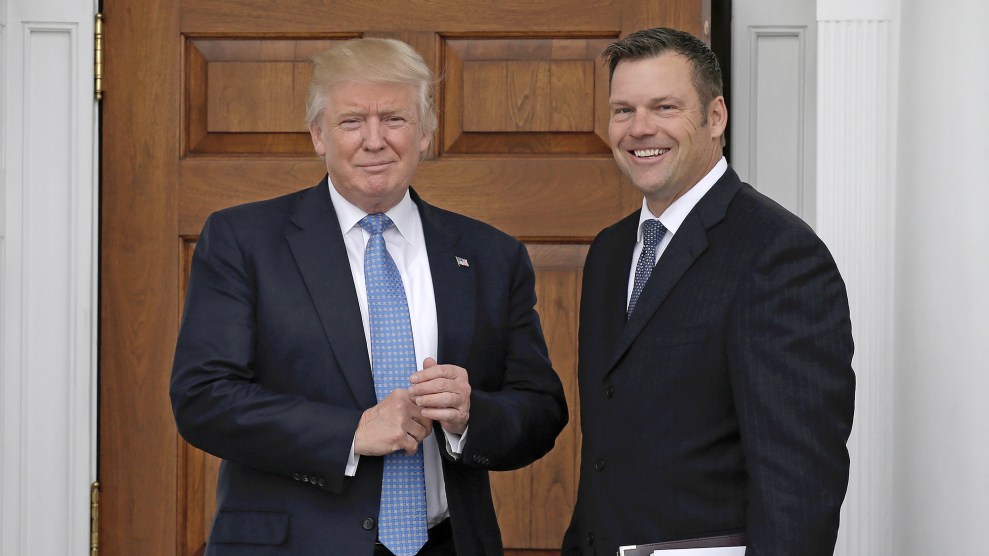 President Donald Trump’s controversial election integrity commission is facing yet another lawsuit, this time from a watchdog group alleging that it violated federal law when it requested comprehensive information about every voter in the country.

At issue is the Paperwork Reduction Act (PRA), a little-known 1980 law that requires the government to go through specific procedures before it requests large amounts of data. Those procedures include creating a clear goal for the collection and plan for its use, soliciting public comment and gaining approval from the Office of Management and Budget (OMB). The group filing the lawsuit, United to Protect Democracy, founded in February by Obama administration alumni, alleges that the commission’s chaotic and controversial data request is precisely the kind of situation the law intended to prevent.

“If the commission wants to seek that information, the Paperwork Reduction Act says it’s got to give an account of why and how it’s going to do so responsibly, and it’s got to give the public a chance to respond,” says Larry Schwartztol, an attorney for the group who filed the lawsuit in federal court in Washington, DC. “So we are going to ask the court to issue an order saying that the commission cannot undertake this data collection until it does those things.” The lawsuit requests that the court halt the data collection and require the commission to destroy or safeguard the information it has already acquired until it complies with the PRA.

The commission, led by Vice President Mike Pence and Kansas Secretary of State Kris Kobach, was created in response to the president’s unfounded claim that millions of people had voted illegally in the 2016 election. Voting rights advocates have warned that the commission is part of the administration’s plan to push voter suppression laws. It became a front-page story in June when Kobach issued a broad request to all 50 states and the District of Columbia for personal information on every registered voter, including name, birth date, address, criminal history, party affiliation, and Social Security number. The commission did not clarify how the data would be used, transmitted, or securely stored. Nearly all states refused to comply with the request at least in part, and civil rights and watchdog groups filed lawsuits in response.

Shortly after the request went out, United to Protect Democracy and the Brennan Center for Justice, a progressive research and litigation shop, sent a letter to OMB asking its director, former Republican Rep. Mick Mulvaney, to halt the commission’s data collection until it complies with the law. The PRA requires the office to respond to such requests within 60 days, but both groups say OMB never replied to the letter. The complaint includes a claim that OMB is also in violation of the statute because of its failure to respond. OMB did not respond to a request for comment Friday.

At the time of the data request, numerous experts voiced concerns that the commission’s data request likely violated the PRA. In response, a spokesman for Pence argued that the commission is not subject to PRA requirements. “The Paperwork Reduction Act only applies to information collections by agencies,” the spokesman, Marc Lotter, told the Hill newspaper at the time. “The Commission is an entity that ‘serve[s] solely to advise and assist the President,’ and is not, therefore, an agency subject to PRA.”

But Schwartztol says his group is confident that the PRA applies to the commission. The act does say it applies to agencies, but it defines agencies very broadly, stating that they include “any executive department…or other establishment in the executive branch of the Government (including the Executive Office of the President).” The act lists four very specific exceptions, but none is for presidential advisory commissions. “I don’t think the commission can make a case it fits under any of” the exceptions, says Stuart Shapiro, a professor at Rutgers University who worked on PRA requests during his five years at OMB. Shapiro  first argued in a July blog post that the commission’s request was illegal because it ignored the PRA.

“I think this is a very strong claim,” agrees Wendy Weiser, who works on voting rights and government reform at the Brennan Center and signed the original letter to OMB on the issue. “This particular document request was, I think, a textbook example of exactly why the Paperwork Reduction Act was passed.” The request, issued on June 28, drew rebukes from states and the public, prompted thousands of voters to remove themselves from the rolls, and was the subject of multiple lawsuits alleging violations of ethics and privacy laws. It was ultimately paused by the courts, then reissued. And while the commission created a new portal for states to submit the requested information, the new request did not ally advocates’ concerns about privacy or how the data would be used. “The disastrous rollout of their request for voter data is a great argument for the provisions put down in the Paperwork Reduction Act,” says Weiser.

Multiple other lawsuits against the commission and its activities, winding their way through the courts, have thus far failed to stop the commission’s activities. In one case, the federal district court in Washington declined a request to immediately halt the commission’s data collection because it found that the commission did not meet the definition of an agency under the Administrative Procedure Act, one of the federal laws at issue in that case. That decision is currently being appealed. But Schwartzol says his group’s challenge faces good odds because the PRA defines agencies more broadly. If the courts ultimately decide that the commission is not subject to the law, that would create a loophole in the PRA, essentially allowing the executive branch to engage in massive data collection without oversight.

United to Protect Democracy is led by attorneys who previously oversaw Obama administration compliance with federal rules and regulations. The group’s goal is to make sure that the Trump administration does not flout norms and rules that prevent the politicization of the executive branch and guard against a slide toward authoritarianism. The group has filed multiple cases pending over the disclosure of government information under the Freedom of Information Act. In July, the group filed a suit against the Trump campaign and Trump confidant Roger Stone on behalf of victims of the Russian hack on the Democratic National Committee, alleging that the campaign and Stone conspired with Russia, leading to the release of confidential information that became public when WikiLeaks published the hacked information online.

“The idea that they can do an end-run around [the PRA] by establishing a presidential commission is pretty unsettling,” says Schwartztol. “It would be really unusual and harmful to set the precedent that there’s sort of an ungoverned space here that the commission can operate in.”

Read the complaint below: