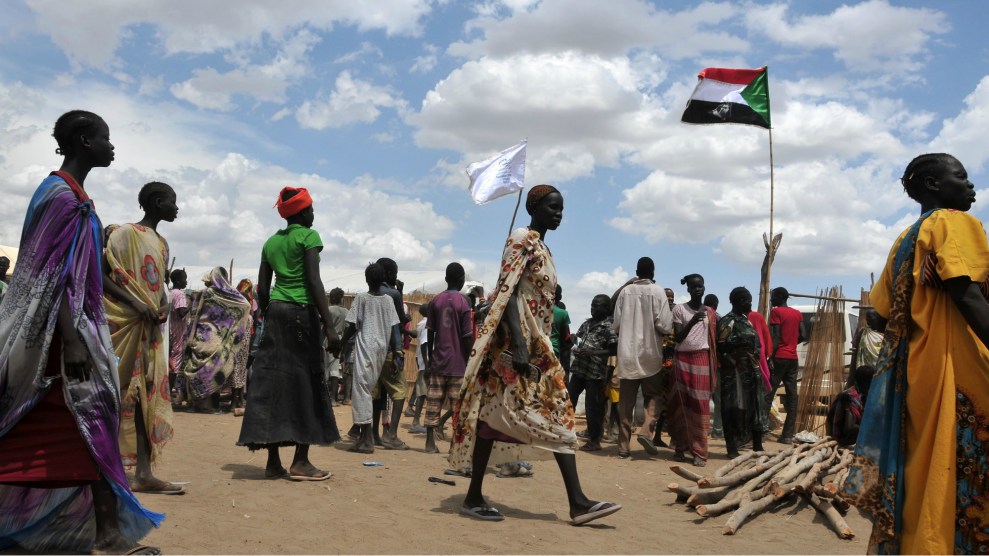 Refugees from South Sudan wait to be resettled into a camp in Sudan. On September 18,2017 the Department of Homeland Security announced that South Sudan will continue to be part of the Temporary Protected Status program. Sudan however, will lose its TPS designation next year. Mohamed Babiker/Xinhua via ZUMA

After his administration announced earlier this month that it was ending Deferred Action for Childhood Arrivals (DACA), removing protections for nearly 700,000 young immigrants living legally in the country, President Donald Trump sought to reassure these immigrants, often referred to as Dreamers, that he would work with Congress to spare them from deportation. But there’s another group of some 400,000 immigrants working and studying legally in the United States who could soon find themselves in a similar position. This week, some of those immigrants learned that they’ll lose their ability to live and work here in a year’s time.

Immigrants from 10 troubled countries are currently eligible for Temporary Protected Status, a legal protection that provides work authorization and protection from deportation. But the Trump administration has hinted that it might not renew TPS designations for some of these countries when they expire. On Monday, the Department of Homeland Security announced that it would terminate TPS for Sudan in November 2018, making it the first country to officially face the end of its TPS designation under Trump.

TPS for South Sudan will be renewed for 18 months, through May 2019, due to “ongoing armed conflict and extraordinary and temporary conditions,” according to DHS, which did not indicate whether it would renew the designation again at that point. Protections for both countries were previously scheduled to expire on November 2.

Sudan was granted TPS in 1997 due to violence stemming from the country’s civil war, while South Sudan, which became an autonomous nation in 2011, received a separate TPS designation soon after gaining independence. In the years since, South Sudan has been engulfed in its own civil war, fueling Africa’s fastest-growing migrant crisis, with more than 2 million people, many of them children, having fled the country and some 1.87 million internally displaced. The country was rocked by famine earlier this year and, according to recent reports from the South Sudanese government and the United Nations, nearly 2 million people remain at risk of starvation. The crisis has forced refugees into neighboring countries, including Sudan, which is struggling with an apparent cholera outbreak and an economic downturn and has long been criticized for human rights abuses.

TPS designations allow nationals of countries experiencing natural disasters, violent conflicts, or other humanitarian crises to live and work legally in the United States while conditions in their home countries improve. In order to qualify for TPS, nationals of the designated countries must reside in the United States at the time of the designation, meet a series of eligibility requirements, and pay a fee every time their status is renewed. DHS has full control over TPS designations, and there are limited options for protecting TPS beneficiaries once a designation is ended. TPS does not offer a path to citizenship, and while some beneficiaries may be eligible for green cards through family sponsorship, the majority of beneficiaries will simply become undocumented should their program be terminated. In other words, they’ll be forced to choose between leaving the country and living in the shadows, at risk of deportation.

At the end of 2016, US Citizenship and Immigration Services estimated that roughly 1,039 Sudanese and 49 South Sudanese are currently protected by TPS, although other organizations have lower estimates. That’s a fraction of the number of TPS holders from countries in Central America and the Caribbean, but immigrant advocates argue that the protections are necessary due to dire conditions in both countries.

“If the administration were making a decision based on policy and the question of whether it was safe for people to return to South Sudan and Sudan, there would be very little ambiguity.”

“If the administration were making a decision based on policy and the question of whether it was safe for people to return to South Sudan and Sudan, there would be very little ambiguity,” says Amaha Kassa of African Communities Together, an immigrant rights group that works with and advocates for African immigrants. He notes that the State Department has raised concerns about a lack of religious freedom in Sudan as it weighs lifting economic sanctions.

The administration was reluctant to share information about its TPS decision. Federal law requires that decisions to extend or terminate TPS designations be made at least 60 days before a designation expires, meaning that the decisions for Sudan and South Sudan were expected on September 3. When Mother Jones reached out to USCIS at the end of August, an agency spokeswoman declined to provide information about the future of Sudan and South Sudan’s TPS designations. When Mother Jones reached out again on September 6, noting that the decisions were now overdue, USCIS implied that a decision had been reached, but said that federal statue did not require an announcement by the 60 day deadline, arguing that it only mandates that “a review and [extension or termination] determination is required at least 60 days out.” On September 11, USCIS confirmed to CNN that it had reached a decision, which it officially announced a week later.

The decision to end TPS for Sudan could indicate what lies ahead for designated countries with larger numbers of TPS beneficiaries, particularly El Salvador, Honduras, and Haiti. In May, the administration issued a six-month extension of Haiti’s status, rather than the typical 18-month extension, and suggested that would be the final extension it would grant to more than 50,000 Haitian TPS beneficiaries. In the coming months, the administration will also make an announcement about the fate of TPS for several Central American countries first granted the protections in the 1990s after natural disasters, potentially pushing as many as 350,000 beneficiaries out of the country or into undocumented lives. Decisions on Haiti, Honduras, and Nicaragua are expected in November, with El Salvador to follow in January. There were signs that Sudan’s TPS designation might be in jeopardy. Earlier this year, Sudan was one of the countries included in Trump’s “travel ban” blocking people from several Muslim-majority nations from entering the United States. (Syria, Somalia and Yemen, three other countries with TPS designations, were also on the list. Their current designations will be up for renewal in 2018.)

In June, John Kelly—then the homeland security secretary and now Trump’s chief of staff—argued that TPS isn’t as “temporary” as it should be, saying that the status should cover the immediate aftermath of disasters rather than provide protections for decades. (Immigrant advocates counter that the effects of a crisis can persist long after the precipitating event, and that improving conditions can take a turn for the worse if large numbers of people are suddenly returned to unstable nations.) Acting DHS Secretary Elaine Duke’s decision on Sudan suggests that the administration is likely to adhere to Kelly’s standard and end protections for some designated countries in the near future, even if those protections have been in place for a long time. And while a bipartisan coalition of politicians has begun to call for a TPS designation for Venezuela in light of ongoing political violence and an economic and health care crisis in the country, the Trump administration has yet to offer any indication of what criteria would need to be met for it to grant new TPS designations.

In some respects, the looming crisis facing TPS beneficiaries from Sudan and other countries closely resembles the struggles of DACA recipients. As Vox’s Dara Lind has noted, Trump’s recent announcement that DACA would be phased out in six months follows a timeline similar to the recent TPS decision for Haiti, when DHS suggested that Haitians see their six-month extension not as a reprieve but as an opportunity to prepare for an end to their status. Lind argues that both decisions fit into a pattern of using fear and instability to keep immigrant populations afraid and vulnerable.

“They’re forcing folks to act out of desperation,” says Patrice Lawrence, the advocacy and policy coordinator for the UndocuBlack Network, which provides services to the growing black undocumented population in the United States. “They’re hoping that people will just accept all that they throw if they’re approaching it from a desperate place.”

In the months since Haiti’s TPS designation was put in jeopardy, immigrant advocates and members of Congress have looked into various legislative solutions, such as expanding the number of people eligible for TPS from certain countries or transitioning some long-term TPS beneficiaries to legal permanent resident status. The DREAM Act of 2017, the latest version of a long-stalled bill that would allow current DACA recipients and other young immigrants to obtain conditional green cards that could possibly lead to citizenship if extensive requirements are met, also includes provisions that would allow TPS beneficiaries currently in the Unites States to receive conditional green cards.

Members of the Congressional Black Caucus expressed support for the temporary protected status program, which has been used to protect nationals from several predominantly black countries in Africa and the Caribbean, during its annual policy conference on Thursday. “The last thing in the world that our government should be doing is turning its back on TPS holders,” argued Rep. Barbara Lee (D-Calif.), noting that several lawmakers recently called on Trump to extend TPS to nationals of countries affected by the recent wave of hurricanes in the Caribbean.  Rep. Yvette Clarke (D-N.Y.) agreed, saying that the caucus does not support “what the administration is doing,” when it comes to ending TPS protections for nationals from vulnerable countries. In the wake of Trump’s DACA decision, some Democrats have suggested that TPS and DACA be further connected in an effort to raise the profile of the little-known immigration program, and Clarke has already sponsored a bill that would extend TPS protections for Haitian nationals.

For immigrant advocates, TPS and DACA are just two parts of a broader conversation over immigration that needs to take place in the United States. “These are not disjointed fights,” says Lawrence.  She notes that there are more than 400,000 people with TPS, approximately 700,000 who have DACA, and about another 10 million undocumented immigrants. “Those are also people that we are fighting for as well,” she says. “We need to be talking about the larger picture.”