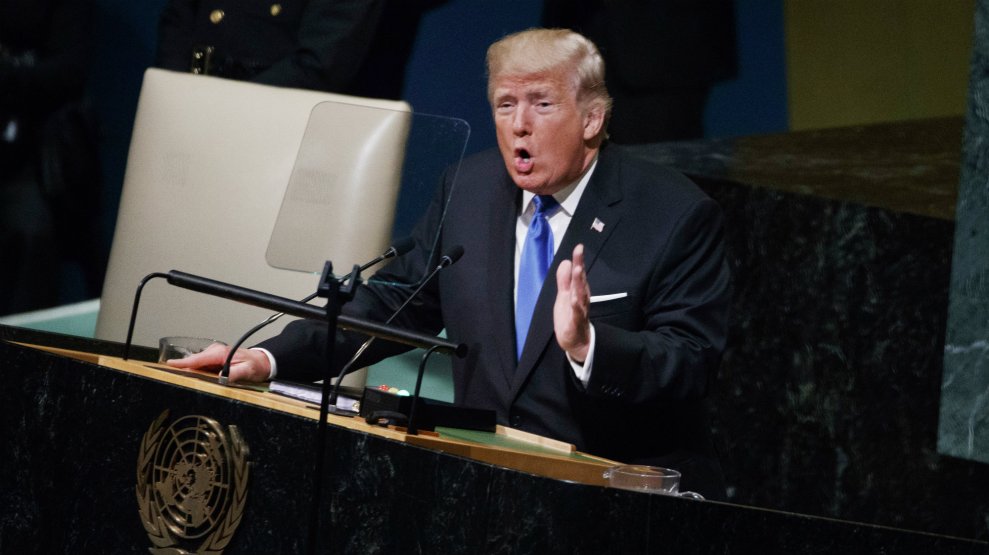 In his first address to the United Nations General Assembly on Tuesday, President Donald Trump made a stark threat, saying the United States “will have no choice but to totally destroy North Korea,” if forced to defend itself or its allies. It was the president’s most forceful remark directed at the country in the wake of its recent testing of nuclear-capable missiles.

“Rocket Man is on a suicide mission for him and his regime,” Trump said, mocking Kim Jong-Un, the country’s leader. Trump called it an “outrage” that other nations would trade with and financially aid a country that threatens nuclear conflict.

I spoke with President Moon of South Korea last night. Asked him how Rocket Man is doing. Long gas lines forming in North Korea. Too bad!

Kim Jong-Un hasn’t taken well to such threats in the past. Last month, after Trump spoke of unleashing “fire and fury,” North Korea announced its was reviewing plans to attack Guam, an American territory in the Pacific.

Trump linked the North Korea missile standoff with Iran’s nuclear program, and hinted he might undo the Iran nuclear deal negotiated under the Obama administration, calling it “an embarrassment to the United States.”

“We cannot let a murderous regime continue these destabilizing activities while building dangerous missiles and we cannot abide by an agreement if it provides cover for the eventual construction of a nuclear program,” he said. The Trump administration plans to make a decision on the deal in October.