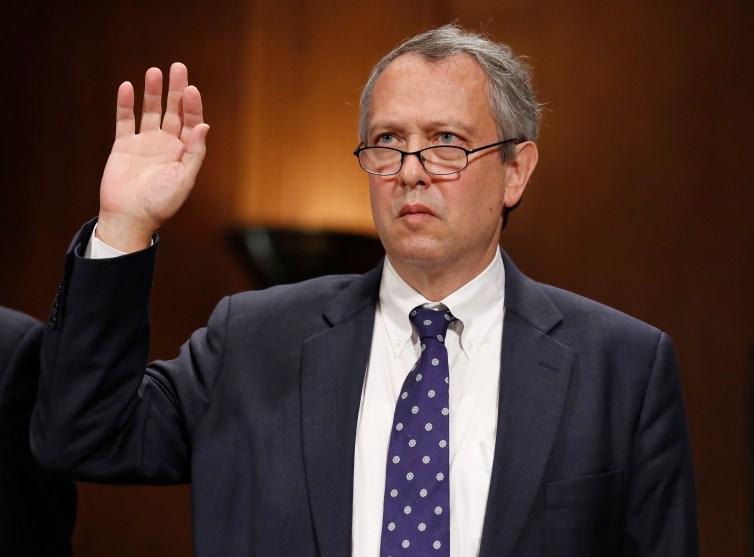 Thomas Farr is sworn in during a Senate Judiciary Committee hearing on his nomination for the District Court for the Eastern District of North Carolina on September 20.AP Photo/Alex Brandon

In July 2013, North Carolina enacted one of the country’s most restrictive voting laws. The measure required certain forms of government-issued photo ID to cast a ballot, cut the early voting period, and eliminated same-day voter registration, out-of-precinct voting, and pre-registration for high school students. The North Carolina NAACP called it a “monster” voter suppression law, filing a lawsuit against it for intentionally discriminating against voters of color.

The GOP-dominated North Carolina legislature hired Thomas Farr, a prominent Republican lawyer based in Raleigh, to defend the law. “I strongly deny that the legislature engaged in intentional discrimination,” he told a federal appeals court during a hearing in June 2016. “It was not a nefarious thing.”

The Fourth Circuit Court of Appeals strongly disagreed, striking down the law a month later for targeting “African Americans with almost surgical precision.” The court said the legislature had requested data on the voting methods African Americans were most likely to use and then curtailed those very things, like early voting and same-day registration. The judges called this evidence “as close to a smoking gun as we are likely to see in modern times” and blocked “the most restrictive voting law North Carolina has seen since the era of Jim Crow.”

Farr appealed to the Supreme Court, saying “the decision insults the people of North Carolina and their elected representatives by convicting them of abject racism.” The court declined to hear the case, leaving the Fourth Circuit’s opinion in place.

Soon, Farr could be in charge of deciding voting rights cases like the one he lost. President Donald Trump nominated him in July to be a federal judge for the Eastern District of North Carolina, which spans 44 counties from Raleigh to the Atlantic Coast. Civil rights groups are mobilizing against Farr’s nomination, which will be voted on Thursday by the Senate Judiciary Committee. Leaders of the Congressional Black Caucus wrote to senators that Farr’s record “puts him at the forefront of an extended fight to disenfranchise African-American voters in his home state of North Carolina.”

Farr has been at the center of fierce battles over voting and representation in North Carolina in recent years. He was hired by the North Carolina legislature in 2011 to defend its redistricting maps for Congress and the legislature, which have repeatedly been invalidated by federal courts. The Supreme Court struck down two of the state’s congressional districts because the legislature had packed black voters into heavily minority districts in order to reduce the influence of minorities in adjoining districts held by white Republicans. A lower court also struck down twenty-eight state legislative districts for discriminating against African American voters, calling the maps defended by Farr “among the largest racial gerrymanders ever encountered by a federal court.”

In addition to his defense of new voting restrictions and racial gerrymanders, civil rights groups have sharply criticized Farr for his links to Jesse Helms, a former US senator from the state who once led a 16-day filibuster against naming a federal holiday for Martin Luther King Jr. and was called “the last prominent unabashed white racist politician in this country” by Washington Post columnist David Broder. Farr served as Helms’ campaign lawyer during his Senate runs in 1984 and 1990, two of the most notoriously racist campaigns in modern American history. In 1990, when Helms faced off against former Charlotte Mayor Harvey Gantt, the city’s first black mayor, the North Carolina Republican Party sent 125,000 postcards to predominantly African American households falsely telling them it was a crime to vote if they’d moved within 30 days of the election, with a punishment of “up to five years in jail.”

The Justice Department sued the Helms campaign, saying that the “purpose of the postcard mailing…was to intimidate and/or threaten black voters in an effort to deter such voters from exercising their right to vote.” The lawsuit said officials from the Helms campaign and the state Republican Party had discussed the mailing with “an attorney who had been involved in past ballot security efforts on behalf of Senator Helms and/or the Defendant North Carolina Republican Party.” The Raleigh News & Observer later identified that attorney as Farr. (Farr told the Senate recently that he’d only learned of the mailings after the fact and was “was appalled to read the incorrect language printed on the card and to then discover it had been sent to African Americans.”)

In that same campaign, Helms ran an ad a week before the election that showed white hands crumpling a job rejection letter, while the narrator said over ominous music: “You needed that job and you were the best qualified. But they had to give it to a minority because of a racial quota.” The “White Hands” ad was co-written by Thomas Ellis, who had been Farr’s law partner for more than three decades. Ellis was an outspoken segregationist and had led the Pioneer Fund, which funded eugenics research that claimed whites were genetically superior to blacks. In 2007, Farr gave a speech honoring Ellis at his alma mater, Hillsdale College, a private Christian school in Michigan.

Farr’s nomination reflects how Trump is reshaping the federal judiciary with far-right judges. Despite the administration’s inaction on many fronts, Trump has already filled more judicial vacancies than President Barack Obama did during his entire first year. The seat on the Eastern District of North Carolina has been vacant since the end of 2005, the longest judicial vacancy in the country. Obama nominated two African Americans to fill the seat, but they were blocked by Republican senators. Though the Eastern District is more than a quarter African American, there has never been a black judge there.

Many of the issues Farr has litigated in recent years could soon come before him if he is confirmed. This week, there’s a trial challenging the congressional maps the state redrew after its initial maps—the ones defended by Farr—were ruled unconstitutional. Though North Carolina is a swing state, Republicans have a 10-3 advantage in the state’s congressional delegation, due in large part to gerrymandering.

Vanita Gupta, who headed the Justice Department’s Civil Rights Division under Obama, says Farr’s nomination is part of a broader effort to restrict voting rights, from the administration’s controversial “election integrity” commission to the Justice Department’s reversal of its earlier opposition to Texas’ voter ID law and voter purging in Ohio. “Mr. Farr’s nomination appears to be part of an overall campaign by the Trump administration to suppress voting rights in America,” she wrote to US senators this week.