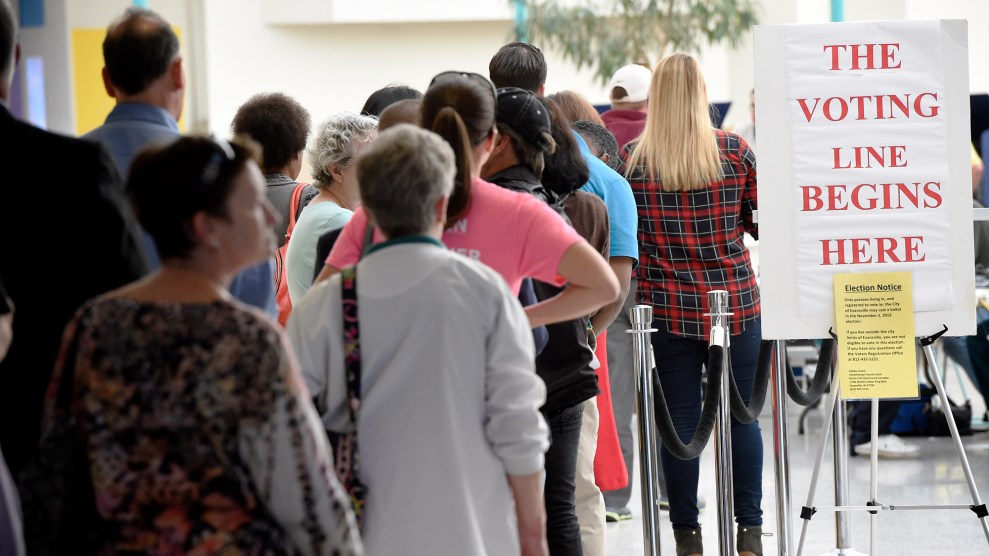 People line up to vote in Evansville, Indiana, on November 3, 2015. Mike Lawrence/Courier & Press via AP

A lawsuit is seeking to block an aggressive new effort by the state of Indiana to purge voters from its rolls. If it succeeds, it would deter other states from following suit. But if it fails, these states could be emboldened to begin purging more voters—and particularly minority voters.

Indiana is one of 30 states that participate in Crosscheck, a program administered by Kansas Secretary of State Kris Kobach. A Republican known for pursuing policies that make it harder to register to vote and cast a ballot, Kobach is the vice chair of President Donald Trump’s controversial election fraud commission, and he seems eager to nationalize his controversial priorities such as Crosscheck. The program compares registration lists for participating states and alerts states if registrations in two states appear to match, suggesting that someone might have moved and neglected to cancel his or her earlier voter registration. Because it compares only first names, last names, and birthdates, it generates a high rate of false positives—one study found that its error rate is more than 99 percent—and has prompted some states, including Florida, to withdraw from the program.

Indiana’s secretary of state, Connie Lawson, also sits on the president’s election commission, which is headed by the former governor of her state, Vice President Mike Pence. Lawson, a Republican, has acknowledged that Crosscheck is unreliable and generates false matches. But this summer, Indiana changed its laws to allow local officials to immediately remove people flagged by Crosscheck if the officials believe the match is accurate. This new policy, the progressive group Common Cause Indiana argues in its lawsuit, ignores federal requirements for how and when to remove voters.

The 1993 National Voter Registration Act (NVRA) allows just two ways for election officials to take someone off the rolls for a change in residence. Officials can do so if they receive written notification from a voter that he or she has moved. Or, if they suspect a voter has moved outside the county, they can send him or her a notice asking them to confirm their address, then wait two congressional election cycles, after which time the voter can be removed if he or she has not responded and has not cast a ballot in that time. The lawsuit, which will be argued by lawyers from the American Civil Liberties Union and the voting rights group Demos, claims that the state’s new removal process forgoes these federally mandated steps.

Although Crosscheck uses the same system to flag potentially fraudulent voters in the states that employ it, it’s up to those states to determine what to do with that information. No other states have been sued for allowing election officials to remove voters from the rolls based solely on a Crosscheck match. Indiana’s procedure may be unique in its seemingly blatant flouting of the NVRA procedures, although other states have recently tried to skirt the NVRA in order to make it harder for voters to register and easier for them to be removed.

“This is about an immediate purge based on list matching,” says Justin Levitt, an election law expert and former Justice Department official in the Obama administration who now teaches at Loyola Law School in Los Angeles. The statute is clear, he says, that “if you think the person might have moved, you’ve got a procedure for that.”

Because minorities are likelier to have common first and last names, Crosscheck disproportionately singles out these voters for purging. “Crosscheck flagged one in six Latinos, one in seven Asian-Americans, and one in nine African-Americans as potential double registrants,” the lawsuit claims. (The lawsuit does not specify what percentage of white voters were flagged.) “Using Crosscheck to directly purge voters from the rolls will discriminatorily impact certain racial minority registrants.”

Lawson’s general counsel argues that if an official believes that a voter has registered in another state, that belief fulfills the NVRA requirement that a voter provide confirmation of a move in writing—even though Indiana officials are never in possession of or able to view the registration form they believe exists. (Indiana employs its own software to root out false positives from the Crosscheck matches, although use of the software is not required by the new state law and does not affect the state’s obligation to follow the NVRA procedures.)

That interpretation of the law, Levitt says, is contrary to the statute. “Federal law doesn’t say if you think that someone has registered in another state that that’s a written certification that they’ve moved,” he says. “This one isn’t ambiguous.”

Levitt believes Indiana has a tough case. Indiana’s interpretation of the law would basically neuter its protections against voter purges. But some federal courts, including the conservative-majority Supreme Court, appear open relaxing provisions of the NVRA. In January, the Supreme Court will hear a case about a separate voter purge provision of the law. That the court agreed to hear the case implies that it is at least willing to consider making it easier to remove voters from the rolls.