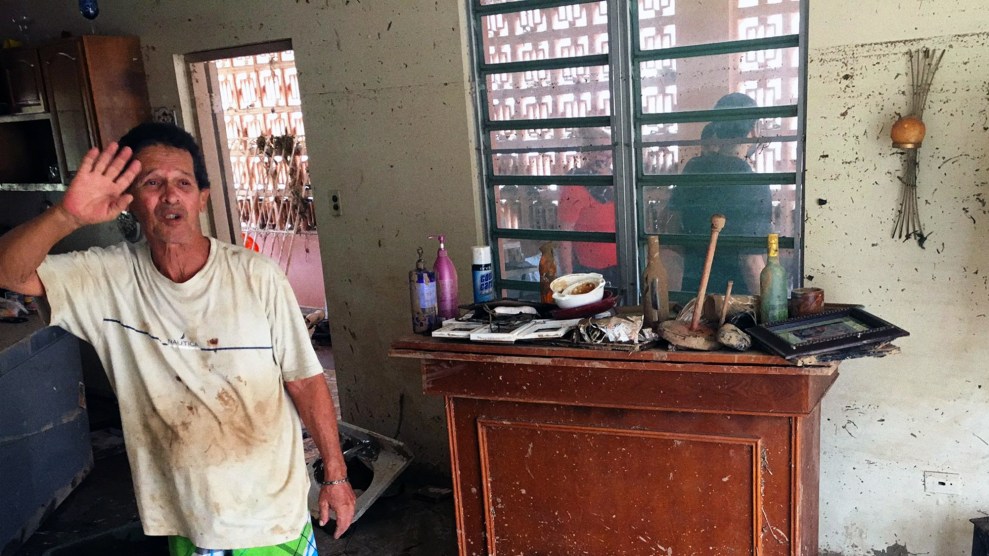 When White House homeland security adviser Tom Bossert returned from a trip to Puerto Rico last week, he got to work telling his colleagues exactly how the Trump administration could put a positive spin on the government’s troubled hurricane relief efforts, according to a leaked memo obtained by Axios.

“I hope to turn the corner on our public communications,” he wrote to White House staff, before detailing new, more-upbeat “themes” he’d like to see the administration highlight over the next couple of days. “Planned hits, tweets, tv bookings and other work will limit the need for reactionary efforts,” he wrote.

One of Bossert’s talking points for responding to criticism of the relief efforts: “The storm caused these problems, not our response to it.” Here’s a longer excerpt from the memo (and go over to Axios for the full report):

I recommend that today and tomorrow we use the general theme of supporting the governor and standing with the people of Puerto Rico to get them food, water, shelter and emergency medical care. Monday and Tuesday we can pivot hopefully to a theme of stabilizing as we address temporary housing and sustaining the flow of commodities and basic government services, including temporary power. After that we focus on restoration of basic services throughout next week and next weekend. Then we start a theme of recovery planning for the bright future that lies ahead for Puerto Rico. Planned hits, tweets, tv bookings and other work will limit the need for reactionary efforts.

The storm caused these problems, not our response to it. We have pushed about as much stuff and people through a tiny hole in as short a timeframe as possible.

Meanwhile, it didn’t take my colleague AJ Vicens long to find a town in Puerto Rico entirely cut off from the help Bossert asserts is making such a difference on the island.

“You are the first person to come here,” a woman told him. According to residents Vicens interviewed, none of the 10,000 federal workers on the island had made it to Ciales, just 45 minutes from San Juan, by the time he got there yesterday. People in the town described a scene of utter desperation. (Follow Vicens on Twitter for regular updates from the island.)

But President Donald Trump appears to be ignoring whatever positive PR strategy his adviser Bossert is going with, instead tweeting on Sunday morning that only “Fake News” and “politically motivated ingrates” were criticizing his administration’s response.

We have done a great job with the almost impossible situation in Puerto Rico. Outside of the Fake News or politically motivated ingrates,…

…people are now starting to recognize the amazing work that has been done by FEMA and our great Military. All buildings now inspected…..

…for safety. Thank you to the Governor of P.R. and to all of those who are working so closely with our First Responders. Fantastic job!