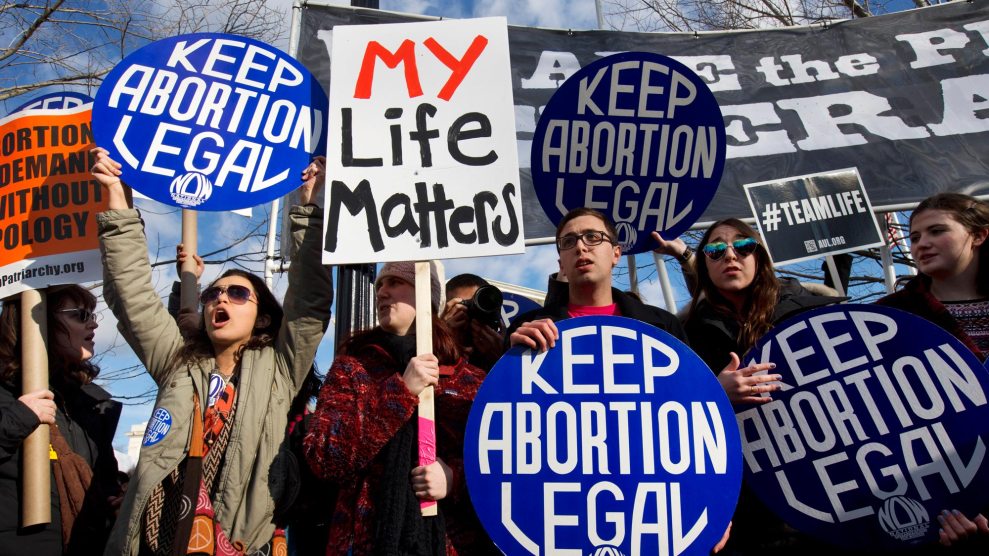 Update, 4:50 pm: Judge Chutkan issued an order on Wednesday afternoon requiring the Trump administration to cease “interfering with or obstructing J.D.’s access to abortion counseling or an abortion,” allowing Jane Doe to travel to her medical appointments and obtain the procedure. The order applies only to Doe, but the ACLU has also asked the court to strike down ORR’s policy of blocking abortion care for other unaccompanied minors.

In a hearing in federal court today, lawyers from Trump’s Justice Department argued why their actions blocking abortion access for an unaccompanied minor currently being held at a federal refugee shelter in Texas are constitutional. The minor obtained a court order allowing her to have the procedure, but she has been prevented from leaving the shelter for her appointment by the Department of Health and Human Services (HHS).

The DOJ lawyers repeatedly refused to acknowledge the constitutional right to an abortion in response to questions from Judge Tanya Chutkan. Their arguments shed light on the possible direction of Trump’s HHS regarding abortion access for minors and women in immigration detention. Brigitte Amiri, a lawyer with the ACLU representing the unaccompanied minor, said that the government’s arguments could have ramifications not just for minors, but possibly adult women seeking to terminate a pregnancy, who were in the custody of Immigration and Customs Enforcement. “We are now on close watch,” Amiri told Mother Jones after the hearing.

The government argued that the restrictions they have placed on Jane Doe, who is 17-years-old and about 14 weeks pregnant, don’t constitute a substantial obstacle to her right to obtain an abortion because she is free to return to her home country for the procedure. They also appeared to contend that Supreme Court precedent guarantees only the choice to have an abortion, not the right to then receive one. “It’s an absurd argument,” says the ACLU’s Amiri. “If you can’t effectuate your choice because the government is preventing you from doing so, it seems ludicrous.”

“It’s an absurd argument. If you can’t effectuate your choice because the government is preventing you from doing so, it seems ludicrous.”

Today’s hearing concerned a case filed by the ACLU last week on behalf of Doe, who crossed the border alone and is being held in a refugee shelter near Brownsville, Texas. The young woman has secured private funding for her abortion, as well as the judicial authorization required by the state of Texas for minors seeking abortions without their guardian’s consent. She has also arranged transportation for the medical appointments necessary to obtain the abortion.

But the shelter, at the direction of the Office of Refugee Resettlement (ORR), which is a part of HHS, has refused to allow her to leave the facility for these appointments. Instead, they have required her to attend counseling at a religiously-affiliated crisis pregnancy center and to have a medically unnecessary sonogram. Federal officials also told her parents about the abortion, even though Doe successfully went through the process of obtaining a judicial bypass from a Texas court in order to avoid involving them.  She says they had been abusive to a sibling who became pregnant.

ORR is led by E. Scott Lloyd, a long-time anti-abortion lawyer. Before his appointment at ORR this spring, Lloyd was an attorney at HHS during the Bush Administration. He had also worked for a law firm focused on defending cases with an eye towards “the right to life and the sacramental nature of marriage.”

Judge Chutkan repeatedly asked the government to explain why it believes that ORR’s actions are not an unlawful “undue burden” on Doe’s right to an abortion. “Because she has chosen to remain here,” replied Scott Stewart, one of the DOJ lawyers arguing the case. “She can get relief with voluntary departure.”

“I am astounded by that position,” Judge Chutkan replied. “She can leave the country or not get her abortion. That’s your position.”

Stewart opened his arguments before the court by noting that he wanted to provide additional context about the fact that the minor had entered the country illegally. Chutkan interrupted him: “You mentioned that five times” in filings, she said.

“I’m not going to give you a concession on that, your honor,” Stewart replied. Chutkan shook her head and responded “That is remarkable.”

Towards the end of the hearing, Chutkan once more returned to the question of precedent guaranteeing the right to abortion. “Abortion is still legal in this country, yes?” she asked Stewart. He replied only that the minor “is entitled to choose one” under Supreme Court precedent. Chutkan asked for clarification: “Is your position that the Supreme Court only allows her to choose an abortion, not to receive one?” Stewart declined to answer.

Judge Chutkan said that she would issue an order in the case by the end of the day.

A transcript of the hearing was not available at press time, so minor inconsistencies in quotes are possible.