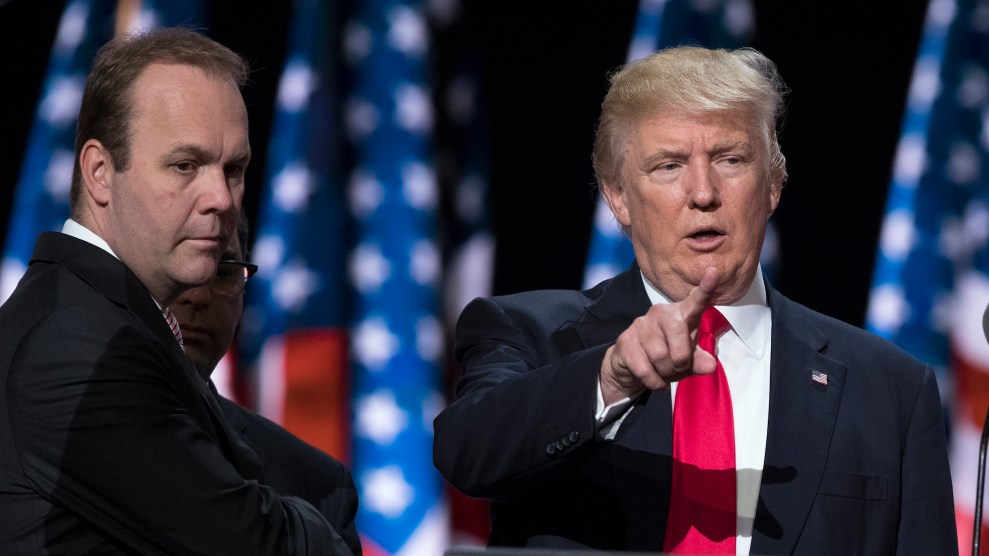 Donald Trump’s former campaign chairman Paul Manafort was not the only onetime Trump aide arrested Monday morning. Manafort’s right-hand man, Rick Gates, was ordered to surrender as well. According to indictments filed by the FBI, for years Gates was Manafort’s trusted consigliere when Manafort took his lobbying and political advising business overseas. From approximately 2006 to 2017, Gates personally laundered about $3 million into foreign accounts he owns, the indictment against him charges.

But Gates wasn’t just Manafort’s sidekick in his overseas adventures. He followed Manafort onto the Trump campaign, and then to Trump’s inauguration committee, where he oversaw much of the planning for the event.

According to the indictment, Gates was a key go-between for Manafort, at one point helping set up two Washington, DC, lobbying firms to advocate on behalf of Ukrainian interests. Gates would pass on instructions to the lobbyists from Manafort, who communicated directly with Viktor Yanukovych, the former Ukrainian president who is close with Russian President Vladimir Putin. Among other issues, Gates and Manafort directed the lobbying firms to highlight the righteousness of Yanukovych’s jailing of a political rival and oppose US sanctions against Russia over its invasion of Crimea.

Gates first got involved with Manafort in the 1980s, when he interned at the lobbying firm Black, Manafort, Stone, and Kelly, which Manafort cofounded with several powerful lobbyists, including longtime Trump confidant Roger Stone. The firm specialized in representing Republicans and overseas strongmen, and Manafort gained a fearsome reputation for being willing to do anything for anyone—so long as the price was right. In the mid-2000s, Gates hooked up with Manafort again at a new firm that dived into the Wild West world of Ukrainian politics, where oligarchs, organized crime, the Russian government, and Western interests all vied for influence.

When Manafort joined the Trump campaign in 2016, Gates tagged along with him. Manafort sat by Trump’s side and spoke to the press as the high-profile campaign chairman, while Gates handled the daily minutiae of the campaign—even when it didn’t go well. When Melania Trump appeared to have plagiarized a Michelle Obama speech during the convention, it was Gates who took the blame for overseeing the speech planning.

Manafort was forced out of the Trump campaign shortly after the convention, but Gates managed to fly under the radar and stayed on with the campaign. He then moved to work with the Republican National Committee on fundraising. Gates, who had close personal ties to Trump’s billionaire friend Tom Barrack (a longtime Manafort friend), wound up with an influential role in the Trump Inaugural Committee. The committee raised a record $107 million but spent surprisingly little of it on an inaugural celebration that was panned as underwhelming and poorly attended. Although donations to inaugural committees are disclosed, the spending is not.

Gates’ fortunes declined as Trump assumed power. After initially joining with other Trump campaign veterans to set up a politically active nonprofit, called America First Policies, to push for pro-Trump policies, Gates was unceremoniously bounced from the group as speculation over his involvement with Manafort’s overseas adventures increased.