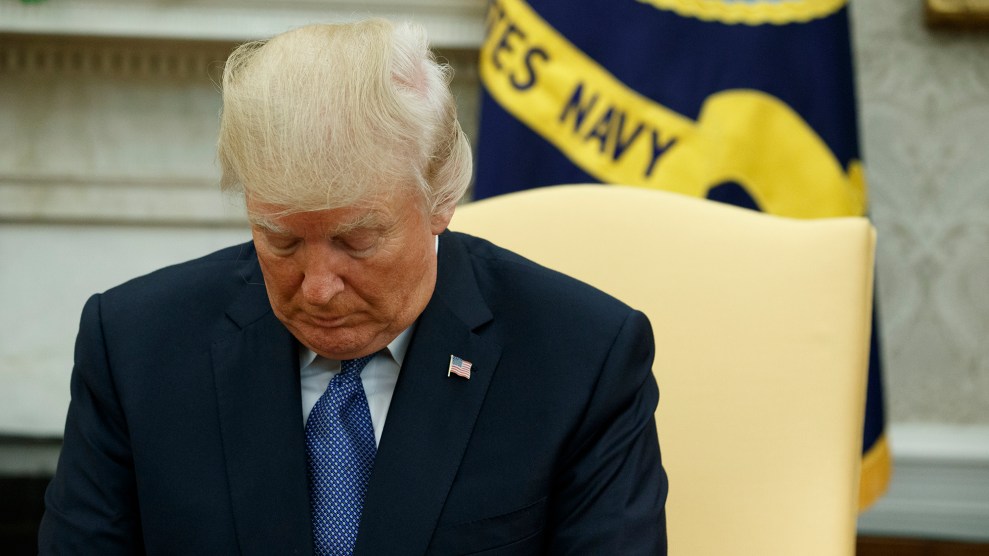 President Donald Trump threatened on Wednesday to revoke the licenses of TV networks such as NBC and CNN whom he accuses of promulgating fake and unfair stories about him. The threat, in the form of a tweet, does not appear well-researched, as it’s virtually impossible for Trump to use the federal government to take licenses from networks he disagrees with. But First Amendment advocates caution that what looks like an empty threat could violate free-speech protections.

With all of the Fake News coming out of NBC and the Networks, at what point is it appropriate to challenge their License? Bad for country!

Were Trump to try to follow through on his threat, it’s unclear how he might proceed. The Federal Communications Commission (FCC) is in charge of regulating communications via TV, radio, and other media. The FCC is an independent federal agency whose members are appointed to five-year terms, and the current commissioners are unlikely to carry out the president’s war with the media: The FCC’s chairman, Agit Pai, is known for having a pro-corporate agenda, not one of sinking networks by kicking them off the air. Glen Robinson, who served as an FCC commissioner in the 1970s, says he doesn’t think Pai “would be stupid enough to act on Trump’s temper tantrum.”

If Trump somehow convinced the commissioners to act on his political vendetta, it’s not obvious how they would do it. As Politico reported, the FCC does not license networks, as Trump implies. Instead, it grants eight-year licenses to local stations. Some stations are owned by Comcast, the parent company of NBC, but much of NBC is run through local affiliates owned by other companies.

Should the FCC decide to retaliate against every local license-holder that broadcasts NBC or another network the president is feuding with, it would run up against its own processes. The FCC allows local competitors and residents to contest license renewal applications, and the grounds for denying a renewal are narrow, requiring that the station violate FCC rules. “Comcast knows full well that the FCC will never, ever, deny its license renewal applications,” Andrew Jay Schwartzman, an expert in telecommunications law at Georgetown University Law Center, told CNN.

Still, civil liberties advocates see the president’s threats—however difficult to carry out—as a chilling attack on free speech. Jameel Jaffer, founding director of the Knight First Amendment Institute at Columbia University, responded on Twitter that the president does not need to execute his threat in order to have violated the First Amendment.

As Jaffer tweeted, there is Supreme Court precedent to suggest that the government does not need to go so far as to revoke licenses to violate First Amendment free speech protections against coercion. It’s unclear where that line is—just how credible a threat must be before the courts would get involved. But the chance that Trump is flouting the Constitution may be greater than the risk that he can actually follow through on his threat.