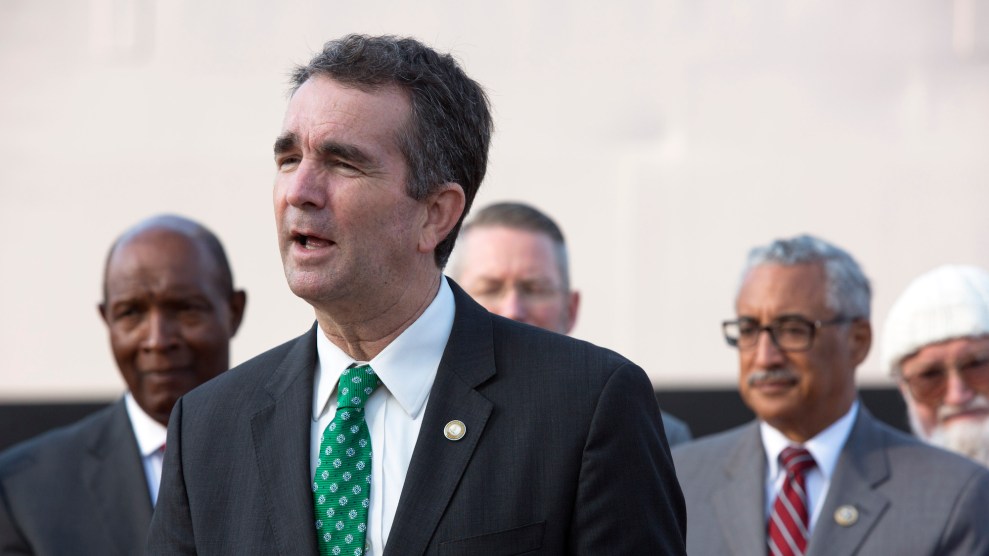 Ralph Northam on the campaign trail in September.The' N. Pham/AP

Terry McAuliffe had voters of color to thank for his narrow victory in Virginia’s 2013 gubernatorial election. Black voters, who make up one-fifth of the state’s electorate, turned out at the same rate they did for Barack Obama in 2012 and pushed McAuliffe, a Democrat, to victory. Black women, who alone accounted for 11 percent of the electorate, helped McAuliffe win the overall women’s vote even as he lost white women by 16 points. The result suggested that when properly engaged, the “Obama electorate”—the younger, minority, and female voters who showed up in 2008 and 2012—could turn Virginia blue even when Obama wasn’t at the top of the ticket.

Four years later, a new gubernatorial race is approaching, this time without the term-limited McAuliffe on the ballot. On November 7, voters in Virginia will determine McAuliffe’s successor, choosing between Democrat and current Virginia Lieutenant Gov. Ralph Northam and former Republican National Committee head Ed Gillespie. Northam holds a slight edge on his opponent in polls, but in order to win in a close race, he’ll need voters of color to show up like they did in 2013.

To that end, groups focused on civil rights and racial justice are working to encourage minority voters, particularly black voters, to turn out on Election Day, framing the contest as an opportunity to combat racism and white supremacy and send a message to Washington at a moment of high racial anxiety among minority groups.

“People are scared and people are angry,” says Adrianne Shropshire, the executive director of BlackPAC, which aims to build African American political power across the country.

BlackPAC, which mobilized voters in support of Hillary Clinton in 2016, has launched a $1.1 million campaign to get African Americans to vote for Northam and other Virginia Democrats running for statewide office. According to the Washington Post, the group will spend $500,000 on digital ads, social media outreach, and mailers. An affiliated nonprofit, the Black Progressive Action Coalition, will invest $600,000 in voter education, including 100 paid canvassers who aim to engage 24,000 black voters ahead of the November election. In total, the two campaigns hope to reach more than 250,000 black Virginians.

Black respondents reported a lower likelihood of voting than other voters of color, a troubling sign for Democrats.

Unlike campaigns that focus on mobilizing likely voters, BlackPAC is partnering with other groups—including the New Virginia Majority, the NAACP, and the Virginia Black Leadership Organizing Collaborative—in an effort to reach voters who are less likely to vote. Pollsters say that reaching this group is crucial and that the effort could hold important lessons for engaging voters of color in the post-Obama Democratic Party.

“If we see a reversion of minority voting patterns back to pre-Obama days, that is a real problem for Democrats,” says Cornell Belcher, a former pollster for the Democratic National Committee and the 2008 and 2012 Obama campaigns. His research group, Brilliant Corners, conducted a poll of voters of color with BlackPAC in late August and early September that helped inform the current canvassing campaign. Black respondents reported a lower likelihood of voting in the state election than other voters of color, a troubling sign for Democrats given their importance in electing McAuliffe and Obama.

Gillespie, a longtime GOP player who barely squeaked past the far-right firebrand Corey Stewart in Virginia’s Republican primary, spent that contest trying to maintain a safe distance from President Donald Trump in a bid to appeal to moderates in a state Trump lost by five points last November. But in the general election, Gillespie’s campaign has started making Trump-esque overtures to voters, running ads linking undocumented immigrants to gangs and opposing the removal of Confederate monuments. Those stances, in the anxious aftermath of the white supremacist-fueled violence in Charlottesville in August, would seem to presage strong minority support for Northam, who has consistently led his opponent by wide margins in polls of racial and ethnic minorities. The BlackPAC/Brilliant Corners poll showed Northam leading among voters of color by a 57-14 margin in early September, and more recent polls have found similar numbers.

But winning over the majority of voters of color and ensuring that their turnout comes close to matching its 2013 levels are two different things, and Virginia Democrats will need both if they hope to secure a victory in an off-year election. As the race entered its final month, political strategists and pollsters said the Northam campaign needed do a better job of reaching voters of color, particularly black voters, and explaining why the party deserves their votes.

“A deeper level of engagement needs to happen,” Shropshire told Mother Jones last month, adding that Virginia Democrats need to “grasp the significance of the concern and anxiety that is being felt inside of communities of color.”

The BlackPAC/Brilliant Corners survey, which reached 1,031 African American, Latino, and Asian American voters in Virginia in early September, found that 55 percent of Latino voters and 54 percent of black voters felt that minorities were under attack in the current political climate. When it comes to voting, racial groups seem to be responding to this anxiety in different ways. Overall, the majority of voters of color said they were likely to vote in November, with 67% saying that they were extremely likely to cast a ballot. Latinos were the most likely group to say they felt under attack and to report an increased interest in voting this November: 71 percent said they were extremely likely to vote. Just 64 percent of African American respondents said the same. Minority voters who back a third party or lack a political affiliation reported the lowest likelihood of going to the polls, with only 49 percent saying they were extremely likely to vote.

Political strategists and pollsters say the Northam campaign must do a better job of reaching voters of color and explaining why the party deserves their votes.

Black turnout has already declined from the Obama races, dropping 7 percent nationwide in the 2016 presidential contest compared to the 2012 election. “In the Obama era, the African American voter, at least in the presidential on-year, was the most likely voter,” says Belcher. “That wasn’t true in 2016. When you get into the internals of the data right now, African American voters are not the best positioned for a broad increase in turnout.”

Polling and voting data suggest that black women and millennials of color, some of the most reliable members of the Obama electorate, could be cooling to the Democratic Party. The share of young voters backing third-party candidates increased by 5 points from the 2012 presidential contest to the 2016 race, although nonwhite millennials were less likely than their white counterparts to support third parties. In the months since the election, black women, Clinton’s strongest voting bloc in 2016, have expressed frustration with the Democratic Party, arguing that it is taking them for granted as Democrats focus on crafting a message that appeals to the white working class.

“One of the things that you have to underline for Democrats and progressives in Virginia is that when you look at these voters [of color], particularly millennials, these are not GOTV voters,” Belcher says, referring to reliable supporters of Democrats who simply need to be targeted by get-out-the-vote efforts. “These are voters that you have to treat like swing voters, because the swing is either for you, or for a third party, or sitting at home.”

According to the BlackPAC poll, an anti-Trump message is not enough of a motivator for these voters. Shropshire explains that while voters of color care about issues like the economy, health care, and education, many of them focus as much or more on racial justice issues like fighting discrimination, police violence, hate crimes, and voting rights. So it’s critical that Democrats like Northam craft a message capable of speaking to both sets of concerns.

David Turner, a Northam campaign spokesman, argues that the Democrat is working hard to reach Virginia’s black voters and is running close to McAuliffe’s 2013 performance in polls. Compared to Gillespie, “we feel like we have a much better message for black voters,” he says, noting the campaign’s extensive black outreach efforts, including visits to black churches, events with black political leaders, and collaboration with groups like the NAACP, and Northam’s longtime support of criminal justice reform and restoring felon voting rights. Asked about any efforts directly targeting young black voters, a group that Northam’s Democratic primary opponent, Tom Perriello, worked hard to court, Turner points to the campaign’s work on a radio series aimed at younger voters and field operation at local historically black colleges and universities and schools with high populations of black students.

As the election approaches, Shropshire says she’s seeing promising signs that black voters will show up at the polls. Of the more than 4,000 people the canvassing effort has reached in the past month, 90 percent have said they plan to vote. In the closing weeks of the race, as minority voters recognize what’s at stake, Shropshire says, “There seems to be more motivation.”