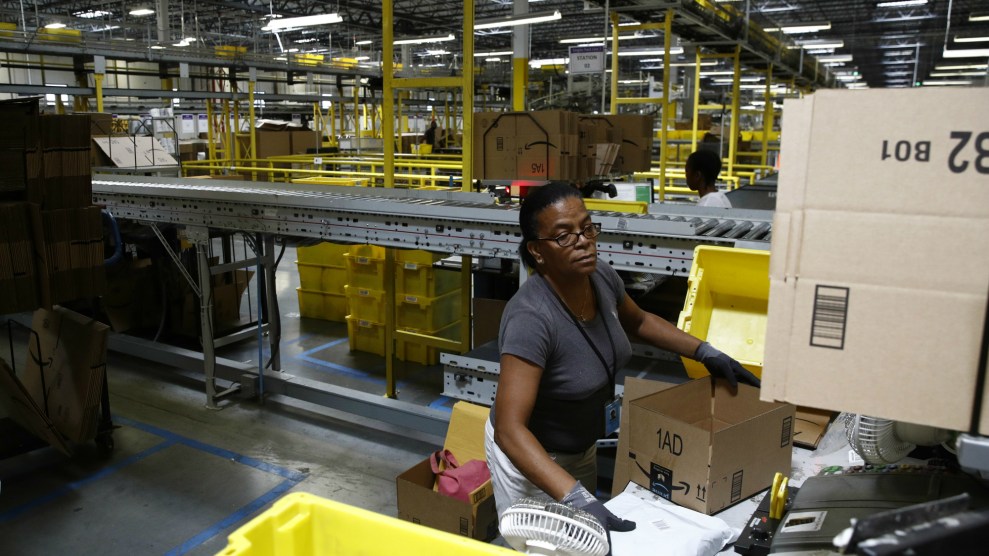 As a person living in the 21st century, it’s almost inevitable that you’ve had the seamless, fast, and hassle-free experience of shopping online: a few clicks and you’re done without ever needing to interact with anyone, and then your items can show up at your door in as little as a day.

But as the holiday season ramps up, it’s a good time to remember that there’s actually a whole lot of human labor behind that fast and easy click. While we at Mother Jones recently reported on how robots will one day take these jobs, they haven’t taken over just yet.

Just consider a great story last week from Gizmodo‘s Bryan Menegus shedding light on a mysterious program known as Amazon Flex: a “nearly invisible workforce” of independent contractors charged with delivering the “last mile” of Amazon orders from a local storage facility to the customer’s door. As Menegus explains, “It’s a network of supposedly self-employed, utterly expendable couriers enrolled in an app-based program which some believe may violate labor laws.” For all of Amazon’s supposed cutting-edge technology, Flex’s system seems so messy and disorganized that workers end up competing against one another to game the system. When their shifts, or “blocks,” go over or under time, drivers aren’t always paid for them. They receive the bare minimum of support from Amazon, and arbitration agreements in their terms of service prevent them from filing class-action lawsuits. Workers, Menegus writes, are terminated “frequently and with little explanation”:

Boilerplate emails reprimanding drivers for supposedly missed packages contain little information: only the date of the infraction, but not the package or address. Whether the package was stolen or an unscrupulous customer merely took advantage of Amazon’s willingness to offer refunds, it’s the courier who takes the fall. “It’s frustrating because Amazon will always believe the customer,” a driver claimed, echoing the sentiments of many others. “Even with photo or bodycam evidence. We have no support. And one customer too many and we’ll get that termination email.”

In response to Gizmodo, Amazon said it “received overwhelmingly positive response[s] from drivers participating in the program.”

According to a lawyer who spoke to Gizmodo, Amazon could be breaking the law due to labor misclassification. Even though Amazon is paying drivers to do the work of employees, they “treat them as independent contractors, denying them basic amenities like health care, benefits, and workers’ compensation in the event of an on-the-job injury.” “Flex is indicative,” Menengus writes, “of two alarming trends: the unwillingness of legislators to curb harmful practices of tech behemoths run amok, and a shift towards less protected, more precarious opportunities in a stagnant job market. Under the current administration, it’s unlikely either will receive the attention it deserves.”

Meanwhile, in a September Wired story, Jessica Bruder profiled the “CamperForce,” a group of retiree-age workers living in RVs who have become Amazon’s “dream labor force,” staffing its warehouses for seasonal stretches with similarly few benefits or protections. Amazon recruits people for CamperForce aggressively because they‘re willing to work during the busiest months of the year and because they need the pay, often without asking for more. The workers themselves are part of a burgeoning community of nomadic workers called “workampers,” though, as Bruder notes, many people become part of the community out of necessity rather than choice. She follows the Stouts, a couple now in their 70s who turned to workamping after losing almost everything during the financial crisis:

The Stouts reported to the warehouse on October 1 for orientation, training, and a period of half-days called “work hardening,” meant to help newcomers adapt to the physical stress of the job. Then the 10-hour shifts began.

Chuck was a picker. His job was to take items down from warehouse shelves as customers ordered them, scanning each product with a handheld barcode reader. The warehouse was so immense that he and his fellow workers used the names of states to navigate its vast interior. …Chuck ended up walking about 13 miles a day. He told himself it was good exercise. Besides, he’d met another picker who was 80 years old—if that guy could do it, surely he could.

On days off, many of Barb and Chuck’s coworkers were too exhausted to do anything but sleep, eat, and catch up on laundry. …As the season wore on, people complained of plantar fasciitis, tendinitis, and repetitive stress injuries, including a condition called trigger finger, which came from using a handheld scanner gun over and over.

Looking a bit further back, there’s also a classic Mother Jones feature from 2012, when Mac McClelland took a job inside a warehouse that helps fulfill orders for some of America’s biggest retailers. She describes a culture of backbreaking work and unrealistic expectations, where workers are expected to hit near-impossible performance quotas and their movements are timed to the second:

With an hour left in the day, I’ve already picked 800 items. Despite moving fast enough to get sloppy, my scanner tells me that means I’m fulfilling only 52 percent of my goal. A supervisor who is a genuinely nice person comes by with a clipboard listing my numbers. Like the rest of the supervisors, she tries to create a friendly work environment and doesn’t want to enforce the policies that make this job so unpleasant. But her hands are tied. She needs this job, too, so she has no choice but to tell me something I have never been told in 19 years of school or at any of some dozen workplaces.”You’re doing really bad,” she says.

… At today’s pickers’ meeting, we are reminded that customers are waiting. We cannot move at a “comfortable pace,” because if we are comfortable, we will never make our numbers, and customers are not willing to wait. And it’s Christmastime. We got 2.7 million orders this week. People need—need—these items and they need them right now.

McClelland doesn’t stay for too long. Read the full story here and take a minute before you hit “place order.”