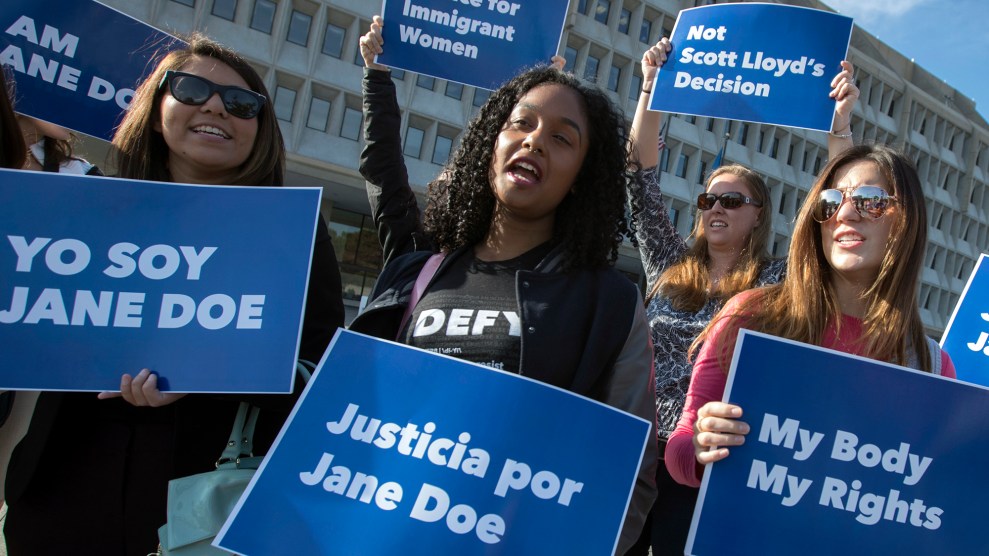 Activists with Planned Parenthood demonstrate in support of a 17-year-old unaccompanied immigrant seeking an abortion outside in Washington on October 20.J. Scott Applewhite/AP

The legal battle over a migrant teen’s right to an abortion appeared to come to a close last month when a federal appeals court allowed the procedure to take place. But the Trump administration is still fighting—to stop other pregnant teens like her from obtaining abortions and to get the Supreme Court to sanction the lawyers who challenged the administration.

On November 3, the Justice Department appealed the case to the Supreme Court, which it hopes will penalize the American Civil Liberties Union lawyers who succeeded in getting an abortion for the teen, identified in court filings as Jane Doe. Legal experts say the government’s argument is weak and that a politicized Justice Department is effectively declaring war on attorneys who challenge the administration.

Amy Myrick, a staff attorney for the Center for Reproductive Rights, sees the move as part of a continued effort to chip away at the constitutional right to an abortion, enshrined in the Supreme Court’s 1973 Roe v. Wade ruling. “The administration continues to defy the Constitution by obstructing reproductive rights and the rule of law,” she says in an email. “They couldn’t stop Jane Doe, so they want another shot to undermine the right to abortion. It’s a reckless attack on women, minors, immigrants, and the legitimacy of the courts wrapped into one.”

Though the ACLU succeeded in helping Jane Doe get an abortion, it is also pursuing a class-action case to protect other pregnant migrant teens in government custody. As an unaccompanied, undocumented minor, Doe was placed into the care of the Office of Refugee Resettlement (ORR) within the Department of Health and Human Services. The Donald Trump appointee who runs the office, Scott Lloyd, is an anti-abortion activist who has made it a policy of ORR to discourage and even block teens in the office’s shelters from obtaining abortions. It is this new practice that the ACLU is attempting to halt in federal court.

“I’ve never seen anything like it,” Marty Lederman, a law professor at the Georgetown University Law Center and former Justice Department official, wrote on the legal blog Balkinization. Lederman and others have noted that the career attorneys working for the Justice Department’s solicitor general did not sign on to the brief, as they normally do, suggesting that the brief does not have the support of nonpolitical department lawyers. They also say the brief largely fails to cite legal precedents to back up its arguments.

“It is, I think, the most troubling sign yet of political interference in the Justice Department’s core legal work,” says a former department attorney.

“So many things about this document are totally unprecedented,” says Deepak Gupta, an appellate lawyer and former Justice Department attorney. “And it’s hard not to read it and come away with the conclusion that the real reason they wanted to do this was they wanted to attack the ACLU’s lawyers. Maybe it’s for reasons that go beyond this case?”

The solicitor general’s office, which determines the government’s position on cases before the Supreme Court and regularly argues before the high court, is often referred to as the “10th justice.” It’s expected to remain above the political fray in determining its legal positions and interpreting the law. So the signatures of the solicitor general, a Republican lawyer named Noel Francisco, and his deputy, Jeffrey Wall, on this brief suggest to some legal experts that the Justice Department under Trump and Attorney General Jeff Sessions is being turned into a political weapon.

“It is, I think, the most troubling sign yet of political interference in the Justice Department’s core legal work,” says Gupta. “It’s hard to read this petition and not come away with the impression that it is a major hit to the credibility of that office.”

Doe is in custody in Texas, which requires a woman seeking an abortion to receive counseling at least 24 hours before the procedure by the same doctor who will perform the abortion. Doe received this counseling in mid-October. A week later, the appeals court gave her the green light, and Doe obtained her abortion early the following morning by the same doctor who had counseled her. The government could have immediately appealed the decision but assumed it had 24 hours because a different doctor would have to provide counseling and then the abortion. When the first doctor became available, the government believed that Doe was going to receive her counseling, when in fact she had the procedure. The government accuses the ACLU lawyers of misleading the government. But the ACLU lawyers promised only to keep the government apprised of Doe’s appointments, and they did that.

In fact, as legal ethics expert David Luban wrote in an op-ed in the Hill, the ACLU lawyers had a legal obligation to protect their client, which meant not informing the Justice Department that the abortion had been moved up. “Not only were Jane Doe’s lawyers not required to tell DOJ that the abortion would happen early Wednesday morning, they were prohibited from telling them,” he wrote. “The true ethical violation would be if Jane Doe’s counsel revealed confidential information to her adversary that might damage her.”

Luban suggested that it is the Justice Department attorneys who are entering ethically dubious territory. “The irony is that filing frivolous accusations with the Supreme Court is itself an ethics violation—and DOJ’s accusations against Jane Doe’s lawyers come perilously close to crossing that line,” he wrote.

As the drama has escalated to the Supreme Court, the case for other teens like Jane Doe continues in district court, where the government is seeking to delay proceedings until the Supreme Court decides whether to weigh in. “We won’t let this distract us from the real issue here,” David Cole, the legal director for the ACLU, told the New York Times, “which is that there are many more young women like Jane Doe out there who are still unable to get the care they need because of the Trump administration’s unconstitutional policies.”