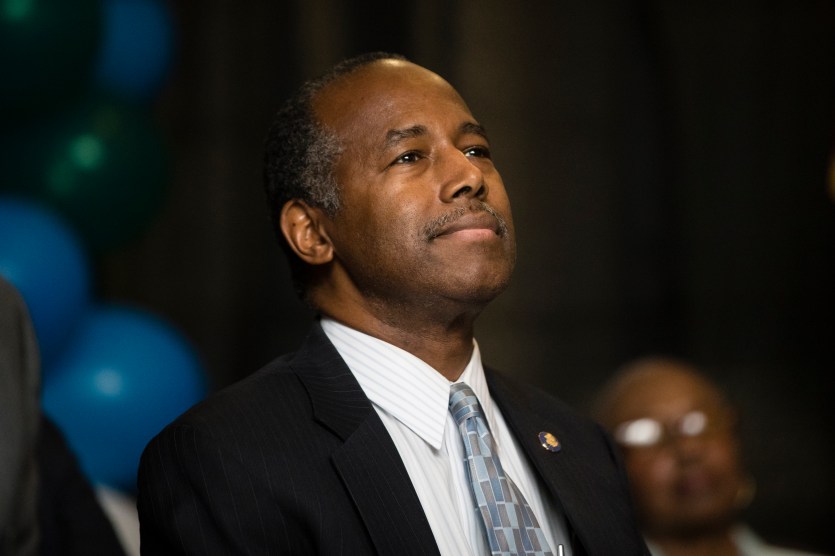 On September 22, as the Republican primary race for Jeff Sessions’ old Senate seat in Alabama narrowed, Secretary of Housing and Urban Development Ben Carson went out on a limb for Roy Moore. Though his boss, President Donald Trump, was enthusiastically tweeting his support for the establishment-backed candidate, Luther Strange, Carson issued a carefully worded statement that stopped just short of an official endorsement of Moore, who was best known for being removed as chief justice of Alabama’s Supreme Court after ignoring a court order to remove a Ten Commandments monument from the courthouse. “Judge Moore is a fine man of proven character and integrity, who I have come to respect over the years,” Carson said. “He is truly someone who reflects the Judeo-Christian values that were so important to the establishment of our country. It is these values that we must return to make America great again. I wish him well and hope everyone will make sure they vote on Tuesday.” Hours after Carson issued this statement, Trump arrived in Alabama to stump for Strange, who in short order was defeated by Moore.

Since allegations have emerged that Moore, while in his mid-30s, pursued relationships with teenaged girls, including one as young as 14, Republicans around the country have called on the former judge to drop out of the Senate race. (Moore has claimed the allegations are untrue and politically motivated.) Yet Carson has remained conspicuously silent as the allegations against Moore have piled up. On Monday, a fifth woman came forward to allege that Moore assaulted her when she was 16.

On Monday afternoon, after Mother Jones inquired about Carson’s stance on Moore, a Housing and Urban Development spokesman offered a general condemnation of politicians who assault women, but it did not mention Moore by name.

“The Secretary believes any man that assaults any woman is unfit for public office,” Raffi Williams, HUD’s director of communications, said in an email.

Williams did not respond to follow-up questions about whether Carson believes Moore’s accusers.