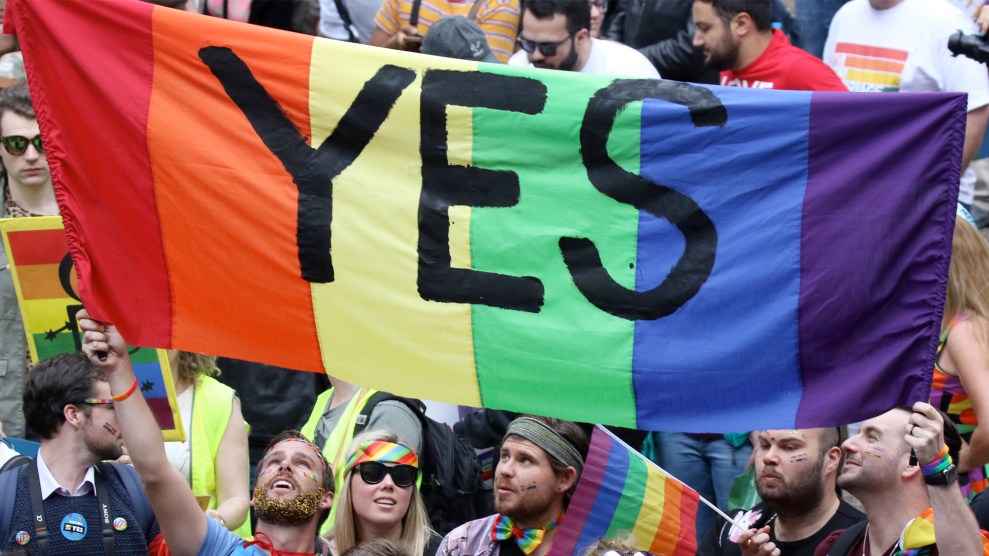 Supporters of marriage equality hold a rally in Sydney, in September.Richard Milnes/Rex Shutterstock via ZUMA Press

Same-sex marriage could soon be legal in Australia, after voters overwhelmingly returned “yes” ballots in a historic, months-long postal survey on whether the law should be changed to allow same-sex couples to wed.

The vote is nonbinding, but Prime Minister Malcolm Turnbull, a supporter of marriage equality, cast it as a way for voters to give the government a mandate to enact same-sex marriage. He is now expected to press parliament to enact a law allowing same-sex marriage.

According to the final tally released by the Australian Bureau of Statistics on Wednesday morning Australian time, 61.6 percent of Australians said “yes” to the change; 38.4 percent voted “no”. The decisive victory was propelled by enormous participation: the ABS said nearly 80 percent of eligible voters, or around 12.7 million people, took part in the survey.

The crowd of Australian expats and tourists packed into The Australian Bar in midtown Manhattan, New York, where I was watching the announcement, broke into applause and cheers of relief as the numbers were finally announced by the Australian Statistician, the country’s rarely heard-from number-cruncher-in-chief.

The intense campaign pitted marriage equality advocates against conservative and religious groups arguing that any change would erode religious freedoms by unleashing the forces of unfettered political correctness. Across the voting period, there were reports of homophobic violence and widespread concerns about the integrity of the process run by the Australian Bureau of Statistics, an agency not normally in charge of running a vote of this size.

Turnbull has long supported same-sex marriage, but his political fortunes are tied to right-wing members of his conservative governing coalition, many of whom are dead-set against it. So when other parties argued that parliament should just change the law itself and opposed a compulsory national vote, Turnbull proposed a compromise: a voluntary opinion poll. The “yes” result of the $122 million survey now empowers Turnbull to push a marriage-equality law through parliament, perhaps by year’s end. Still, passage is not guaranteed, and Turnbull will likely have to try to secure it without the unanimous support of his deeply divided coalition.

There are currently two prominent proposals for marriage equality that parliament could take up. Buzzfeed Australia reported on Tuesday that one bill in particular, backed by the main “yes” camp organizers and supported by a broad cross-party group of Australian senators, has emerged as the most viable way to change the law. This bill would legalize same-sex marriage but still allow religious ministers and organizations to refuse to oversee marriages they don’t like. A competing bill, likely to divide the governing coalition along ideological lines, would provide much more sweeping protections under anti-discrimination laws to people and businesses who refuse to serve same-sex couples. Turnbull has vowed that the latter bill won’t see the light of day, although some conservatives in the parliament have signaled that they will push for it, including the former prime minister and most prominent “no” camp leader, Tony Abbott.

“I don’t believe Australians would welcome, and certainly the Government would not countenance, making legal discrimination that is unlawful today,” Turnbull said this week, according to the Australian Broadcasting Corporation.

Turnbull has promised members of his governing coalition a “free” vote, allowing more moderate members to vote with lawmakers in other parties to pass marriage equality.

This is a developing story and will be updated.