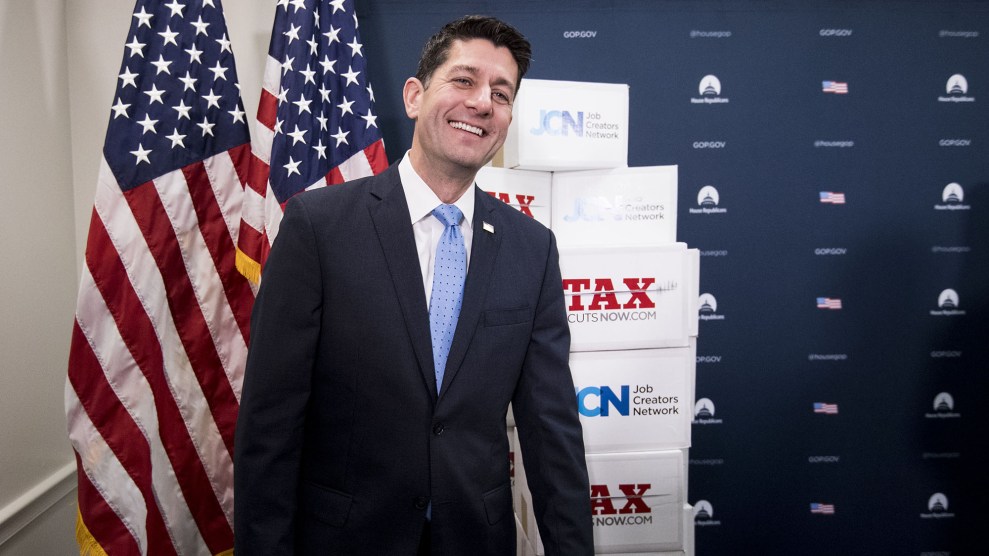 On Thursday, the House of Representatives voted 227-205 to approve a tax cut bill that provides nearly half of its benefits to the top 1 percent of taxpayers. The House Tax Cuts and Jobs Act would cost $1.43 trillion in deficit spending over the next decade, with most of that spending going to businesses.

The effects for everyone else are much more mixed. The nonpartisan Tax Policy Center (TPC) projects that the middle-class will get a $830 tax cut next year under the bill, compared to $37,100 for the top 1 percent of Americans. But by 2027, after a temporary $300 per adult temporary credit expires, the middle-class tax cut would drop to $360 per year, as the benefits for the top 1 percent grow to $62,300 per year. Overall, 30 percent of the middle-class would pay more taxes in 2027 under the bill, according to the TPC.

All Democrats and 13 Republicans voted against the bill on Thursday. With the bill out of the House, the tax battle now turns to the Senate. The House and Senate bills are largely similar, but due to a last-minute amendment the Senate bill now repeals Obamacare’s individual mandate. That will lead to 13 million fewer people having health insurance.

The centerpiece of the Republican bill is a massive reduction in taxes on businesses and their owners. The bill drops the corporate tax rate from 35 percent to 20 percent, while cutting the top rate for businesses whose profits are taxed as individual income from 39.6 percent to 25 percent. The bill condenses all individual income taxes into four brackets of 12 percent, 25 percent, 35 percent, and 39.6 percent. Only households that make more than $1 million—up from $470,000 today—would pay the top rate.

The corporate tax cuts overwhelmingly benefit the wealthiest Americans. Nonpartisan experts generally project that 75 percent of the cuts go to a company’s owners, rather than its employees. On the individual side of the tax code, the biggest gifts to the rich come from eliminating taxes on inheritances and the Alternative Minimum Tax, which helps ensure that wealthy people don’t use loopholes to reduce their tax liability to almost nothing.

The Joint Committee on Taxation, a nonpartisan Congressional body, has also found that the House bill would raise taxes on millions of Americans. In 2019, the JCT projects that about 1-in-5 middle-class families would either pay more taxes or get less than $100 in tax cuts. By 2027, that grows to 40 percent as families lose the $300 per person tax credit in 2023 and get shifted into higher income tax credits by a new way of measuring inflation Republicans are pushing.

Republicans argue they’ll never let the $300 tax credit expire. But there are no guarantees that future members of Congress will stick to that promise as they stare down the huge national debt-levels exacerbated by Republicans’ tax cut.