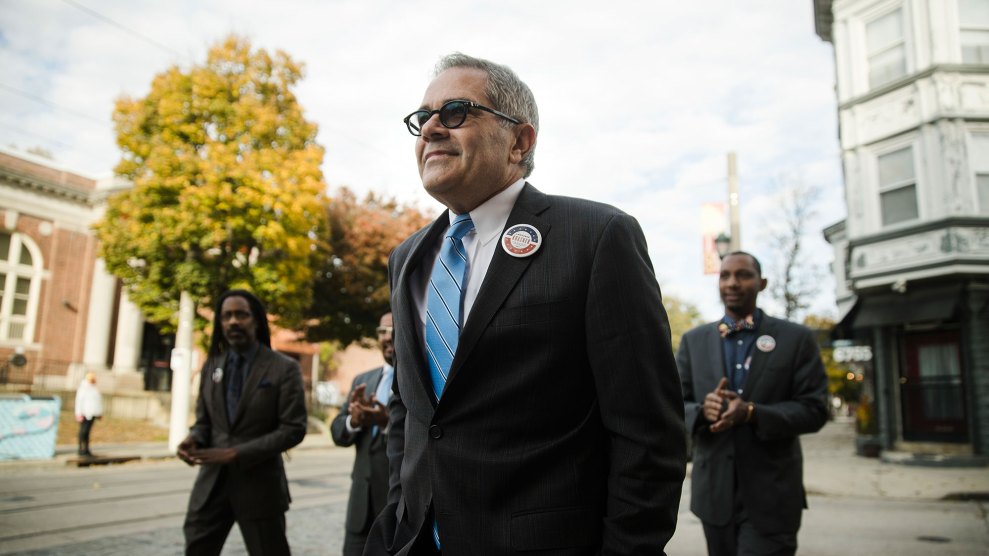 Krasner has spent his career suing cops on behalf of activists like Black Lives Matter protesters and Grannies for Peace. So it came as a bit of a surprise when the civil rights lawyer announced he’d be running for DA—a position commonly referred to as “top cop”—in Philadelphia. Mother Jones‘ Alex Sammon profiled Krasner in May, writing:

Nowhere is the reality of “tough on crime” more evident than Philadelphia. Former DA Lynne Abraham, winner of four straight terms from 1991 to 2010, was known both as “America’s Deadliest Prosecutor” and the “Queen of Death” for her fervid pursuit of executions, over 100 in total. Former mayor and police commissioner Frank Rizzo is among the most notorious cops in American history, once claiming he’d “make Attila the Hun look like a faggot” while on the mayoral campaign trail. That legacy has helped give the City of Brotherly Love the highest incarceration rate of the 10 largest cities in the United States, twice the national average. (It’s also the poorest, with one of the lowest-rated public school systems to boot.)

Krasner, who was considered a radical outsider in the race but who drew support from liberals across the country, ran on a platform of criminal justice reform. Writes Sammon:

Against the backdrop of a new federal administration that wants to toughen rules on prosecuting crime, Krasner instead strongly believes that “mass incarceration hasn’t worked. It hasn’t made us safer; it hasn’t made us freer.” He wants to abolish the death penalty—Philly is the only city in the Northeast that still has it. He’s pledged to refuse to bring cases that have resulted from illegal stop-and-frisk actions….Krasner also wants to end cash bail and reform civil forfeiture.

Krasner will replace Democrat Seth Williams, who made waves as Philadelphia’s first black DA, but resigned in June after being charged with corruption and was recently sentenced to five years in prison for accepting a bribe.