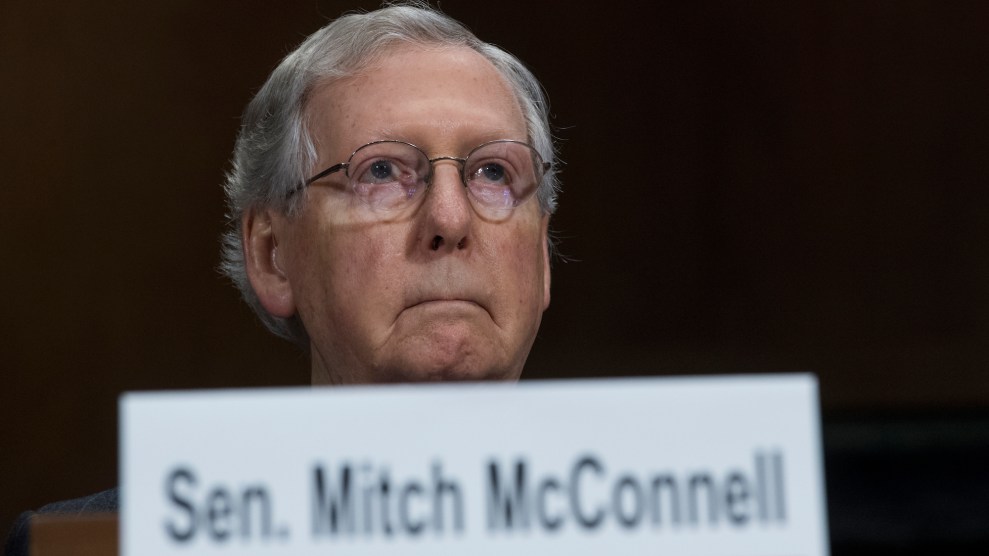 Despite plans to hold a vote by the end of the week, Senate Republicans are still trying to round up the necessary votes. Senate Majority Leader Mitch McConnell (R-Ky.) has only two votes to spare on taxes, and at least six of his members have expressed public concern about the $1.4 trillion tax cut.

That might not be encouraging news for Democrats opposed to the tax bill. The most vocal Republicans opponents of the bill are withholding their support in order to make the tax cut even less appealing to progressives.

Senate Republicans are expected to vote on the tax bill as early as Thursday. The legislation provides businesses with nearly $900 billion of permanent corporate tax cuts over the next decade. Individuals—including the wealthiest Americans—get about $500 billion of temporary tax cuts that Republicans say will eventually be extended.

Republican opposition to the bill has not focused on the disparity between corporate cuts and middle-class tax relief. Instead, Republican senators have fretted that the tax bill does not give enough to businesses, or that it adds too much to the national debt. Others may be hedging to get leverage for adding pet causes to the Tax Cuts and Jobs Act. Below is why the six Republican senators are still considered holdouts.

Sens. Ron Johnson (R-Wis.) and Steve Daines (R-Mont.) are the only two Republican senators who have explicitly said they will vote against the tax bill in its current form. The senators want an even more generous cut for businesses, known as “pass-throughs,” whose profits are taxed as individual income. Under the Senate bill, pass-through owners would see their top tax rate drop from 39.6 percent to about 32 percent, compared with 25 percent under the bill that House Republicans passed earlier this month.

Republican talking points tout the plan to cut taxes for pass-throughs as a boon to “true-blue…ma and pa bakeries,” despite the fact that about 70 percent of pass-through income goes to the top 1 percent of Americans.

There are already signs that Johnson is falling back into line. On Monday, the senator told the Wall Street Journal he spoke with President Donald Trump and Vice President Mike Pence about his objections over the weekend. Both told him they “agreed this is a problem to be fixed and we’ll get it fixed,” Johnson said. Almost all of Trump’s roughly 500 businesses are pass-throughs, and Johnson’s brother is the registered agent for the family pass-through business that Johnson used to run.

It’s not clear what the pass-through fix would look like, though Johnson has suggested he’d like to see something more like the House proposal. On Monday afternoon, Daines joined Johnson in opposing the tax bill. Dained added in a statement that “I remain optimistic.”

Obamacare Repeal Shouldn’t Be in the Tax Bill

Sen. Susan Collins (R-Maine) has said the biggest flaw of the Senate bill is that it repeals Obamacare’s individual mandate. Eliminating the mandate would raise individual insurance premiums by about 10 percent and lead to 13 million fewer people having health insurance by 2027, according to the nonpartisan Congressional Budget Office. Many of those would be young people choosing not to buy insurance.

Collins, who voted against efforts to repeal Obamacare earlier this year, favors House Republicans’ decision to keep health care and taxes separate. But she has not said she will vote against the Senate bill if it eliminates the individual mandate.

Either way, McConnell can likely pass the tax bill without her. After opposing full Obamacare repeal earlier this year, Sen. Lisa Murkowski (R-Alaska) wrote last week that she supports repealing the individual mandate. Sen. John McCain (R-Ariz.), the other no vote on Obamacare repeal, is also leaning toward supporting the bill.

Sen. Jerry Moran (R-Kan.) said at a town hall over the weekend that he’d also prefer to keep Obamacare out of the tax bill. On Monday, Moran clarified in a statement that repealing the individual mandate is not a deal-breaker.

The National Debt Is Already Too High

The squishiest opposition comes from the few deficit hawks left in the Republican caucus. The Senate bill officially adds $1.4 trillion to the deficit over the next 10 years, at which point it becomes revenue neutral again because the bill’s individual cuts expire in 2026. The 10-year cost jumps to $1.65 trillion if the individual cuts are extended, which Republicans say they hope to do.

Sens. Bob Corker (R-Tenn.) and Jeff Flake (R-Ariz.), two of Trump’s sharpest critics, have attracted the most attention for raising concerns about how the tax bill would increase the United States’ debt, which already exceeds $20 trillion. Corker agreed in September to let Republicans move forward with a tax-cut framework that allows $1.5 trillion in deficit spending over 10 years. On the other hand, he’s said he would oppose the tax bill if it adds “one penny to the deficit.”

Flake has not said he will vote against the bill. Corker’s spokeswoman told the Wall Street Journal on Monday that Corker is working to find a “responsible path forward” and remains “hopeful that the final bill will be good for our country.”

Sen. James Lankford (R-Okla.) said on Monday that he’s skeptical the bill will pay for itself and refused to say whether he will vote for it. Pointing to the budget crisis caused by state income tax cuts in Kansas, Lankford said it’s “important to learn from what we’ve seen.”

His hand-wringing could give him more influence over the final bill. In February, Lankford introduced a bill that would reshape campaign spending by letting churches and nonprofits endorse political candidates for the first time since 1954. The House tax bill includes that proposal, but the Senate bill does not. On Sunday, a spokesman for Lankford told the New York Times that there’s a good chance that will change.