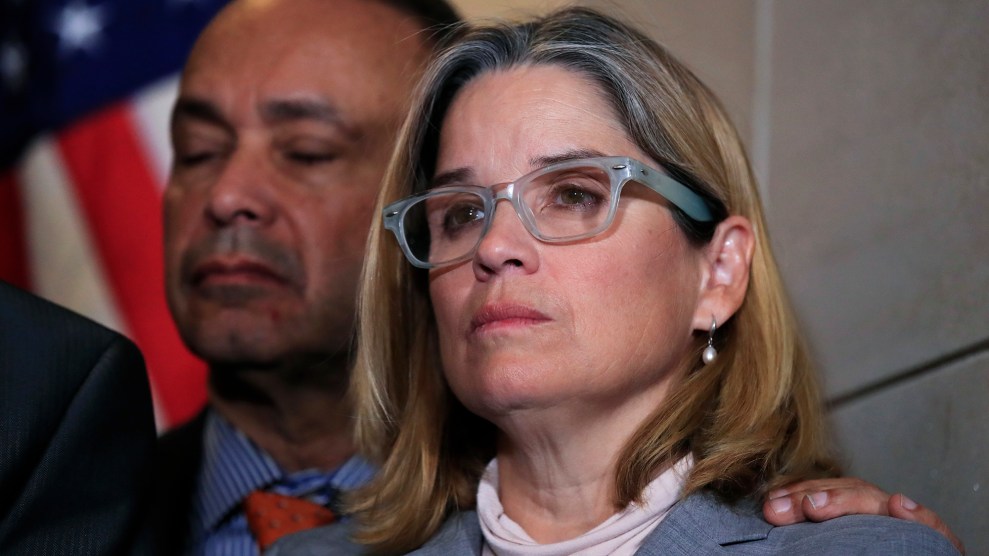 Ten days after Hurricane María ripped through Puerto Rico—lashing the island with 155-mile-per-hour winds and pounding rain that knocked out the entire power grid and destroyed nearly half a million homes—President Donald Trump went after the mayor of the island’s capitol city.

“The Mayor of San Juan, who was very complimentary only a few days ago, has now been told by the Democrats that you must be nasty to Trump,” the president tweeted on September 30. “Such poor leadership ability by the Mayor of San Juan, and others in Puerto Rico, who are not able to get their workers to help. They want everything done for them when it should be a community effort. 10,000 Federal workers on Island doing a fantastic job.”

The attack brought international attention to Mayor Carmen Yulín Cruz, who, before that tweet, wasn’t widely known outside of Puerto Rico. She took full advantage of the spotlight, critiquing the Trump administration’s sluggish response to one of the worst natural disasters in decades, and pushing for more aid and support for the island’s 3.4 million residents.

These residents are going to need all the help they can get. Recovery has been slow, but there are signs of progress. On a website with data from a number of sources, the government reports that water for nearly 82 percent of the island has been restored—although a boil advisory remains in place. Nearly 85 percent of gas stations have reopened, and nearly 89 percent of grocery stores are fully functioning. All of the island’s ports and post offices are functioning, and commercial flights—both domestic and international—are back to normal levels.

But Puerto Rico Gov. Ricardo Rosselló told Congress last week that the damage from the category 4 storm will cost roughly $95 billion, a staggering amount for an island already grappling with nearly $120 billion in outstanding debt and unfunded pension obligations. During one of the hearings, Rep. Rob Bishop (R-Utah) told Rosselló, “A legacy of dysfunction” at the island’s power authority created “a competence deficit” that threatened the ability of the governor’s administration to improve the lives of Puerto Rican residents.

Meanwhile, the Twitter fight between Trump and Cruz has died down, and Cruz has continued her efforts to organize relief, get electricity restored, and fulfill her regular duties as mayor. I spoke with her last week by telephone.

Mother Jones: It’s been a little over two months since the hurricane struck. Do you have any perspective on the disaster?

Carmen Yulín Cruz: No one in Puerto Rico will ever be the same as they were [before] September 20. Our priorities have changed. The things that we put emphasis on have changed. The way we see our future is no longer distant but is here and now. We have been left with a sense of being unable to get off the starting block and getting on with the race. Last week the power went out completely on the island. Yesterday the power went out completely on the island. Today the power went out about half of what it was before. It seems like we haven’t been able to have a sustained effort that will, on a continuous basis, provide us with a steady pace of, I wouldn’t call it recovery, but I’d call it transformation.

“The way we see our future is no longer distant from us but is here and now. We have been left with a sense of being unable to get off the starting block and getting on with the race.”

MJ: How long do you think it will take to get back to normal?

MJ: Has there been a difference in recovery between the city and the countryside?

CYC: In San Juan, we see the light at the end of the tunnel, but we’re still in the tunnel. Outside of San Juan, the more you leave the metropolitan area, there are towns where there’s absolutely no water, there’s absolutely no electricity, and where no aid has gone. We have certain places in San Juan we haven’t reached, but those are places where people are not in need of food to survive.

Even in the midst of this, people’s resiliency and their thirst for life and their ability to come up with community-based solutions to problems that the government seems to find very difficult have come out. This is like the Dickens novel: This is the best of times and it is the worst of times. I have seen the best in people, and I have seen the worst in people. I have seen people who have reached out and said, “How do I make my community better.” And I have heard people say, “As long as I’m okay, nothing else matters.”

MJ: What structural changes should be made?

CYC: We have to get a waiver from the Stafford Act that puts together the structure for FEMA. I don’t want houses that were torn apart because they had roofs made of wood and zinc panel to be rebuilt with wood and zinc panels. That would be rebuilding while ignoring the reality of climate change. I hate the cliché that every crisis brings with it an opportunity. What it brings with it is a choice. We have to choose to ensure that we have more than one week’s worth of food in Puerto Rico for our entire population. We have to take climate change seriously because it is real, and we have to make it an integral part of how we reshape, how we reform and how we rethink the structure of our society. We have to think about our relationship with the United States. How do we make it a more fair, dignified one? It will never be totally equal, but it should be much more fair and just. We both know what our duties are and we both know what our expectations should be.

“We have to take climate change seriously because it is real, and we have to make it an integral part of how we reshape, how we reform and how we rethink the structure of our society.”

MJ: What have you seen from people across the country in terms of their support for Puerto Rico?

CYC: I’ve seen the dichotomy of the United States. It is a land full of people with big hearts, with open hearts, with shared values of compassion, of integrity and they have reached out. The American people have come, have seen, have opened their hearts while the Trump administration has just reached for their cocoon and said, “Everything’s okay.”

CYC: A 10 out of 100. Come to think of it, what kind of a leader grades themselves when talking about the response to a humanitarian crisis? A leader with a big heart would say, “Look, we’ve done this, this, this, this, this,” and let the job and the compassion and the way things have been done speak for itself. You wouldn’t have to work so hard to pull a needle through a thread of comments and self-accolades because everyone would have seen it. I wish I would have been able to say, “Great job, Mr. President,” because that’s what we needed.

“I wish I would have been able to say, ‘Great job, Mr. President,’ because that’s what we needed.”

MJ: Traveling around the island, a constant theme was local communities doing for themselves despite a lack of support from the island or the federal government. Is this an issue of local mismanagement or problems with the federal response?

CYC: It’s both. It’s local mismanagement, and it is the constraints placed upon us by our political status that simply is not in anybody’s best interest. It used to be. It’s not anymore.

MJ: A Puerto Rican friend described Hurricane Maria as a tipping point that will force a long-overdue conversation about Puerto Rico’s status: true statehood or independence. The point was that any notion the status quo works was blown away, literally and figuratively. What do you think?

CYC: It hasn’t worked for a long time. I said a couple of weeks ago that we will no longer be able to hide our inequality and the injustice and the poverty in Puerto Rico behind palm trees and Piña Coladas. This is it. The music has stopped and now we have to pay the fiddler.

MJ: What are the most pressing demands right now?

MJ: Everybody across the island obviously deserves to get their electricity back, but in terms of tourism and Old San Juan, has that power been restored yet?

CYC: No, there’s not power back in Old San Juan. During the day, things were getting a little back to normal, but Old San Juan lives off of tourism. Tourism has dwindled. Cruise ships were coming about seven a week, so we were getting between 21,000 and 25,000 people a week from them. We’re hoping that the situation can be fixed before Christmas. Why? Because it’s a high season.

MJ: The official death count has fluctuated wildly and there have been a lot of questions about it. Why is it important to have an accurate count of the number of people killed by the storm?

CYC: That’s another credibility issue. A couple of weeks ago, I was in Washington, DC, and I was being interviewed by CNN about the number that the government had given. They said 911 people had been cremated. I was told [by a local government official] that it was irresponsible to say that. What was irresponsible was that the truth about the deaths still is a mystery for us in Puerto Rico. We don’t know what they died of. We don’t know if there is an underlying health issue that we have to deal with. That is what data is all about—being able to pinpoint a problem so you can solve it.

MJ: Do you have confidence that Puerto Rican Gov. Ricardo Rosselló can lead you guys through this?

CYC: The credibility of his administration has been shattered with the Whitefish situation, with his inability to stand up to President Trump and tell things as they were and as people were experiencing them. I’ll be very honest with you, this is more about the people of Puerto Rico and about those who were considered political leaders of Puerto Rico. Political leaders come and go. Where do the people go? What priorities are they willing to put first? You can have a list of priorities, but what do you put first? Those are the things that the Puerto Rican people need to be speaking about loud and clear. We need to engage the Puerto Rican diaspora because they have been our voices in the states and continue to increase the volume. [It is evident that] his administration does not have much credibility. That is going to hinder the ability of Puerto Rico to move forward. It is the country as a whole, it is the island as a whole, that has to continue to fight, to endure, to overcome, to reshape, and to lead its transformation.