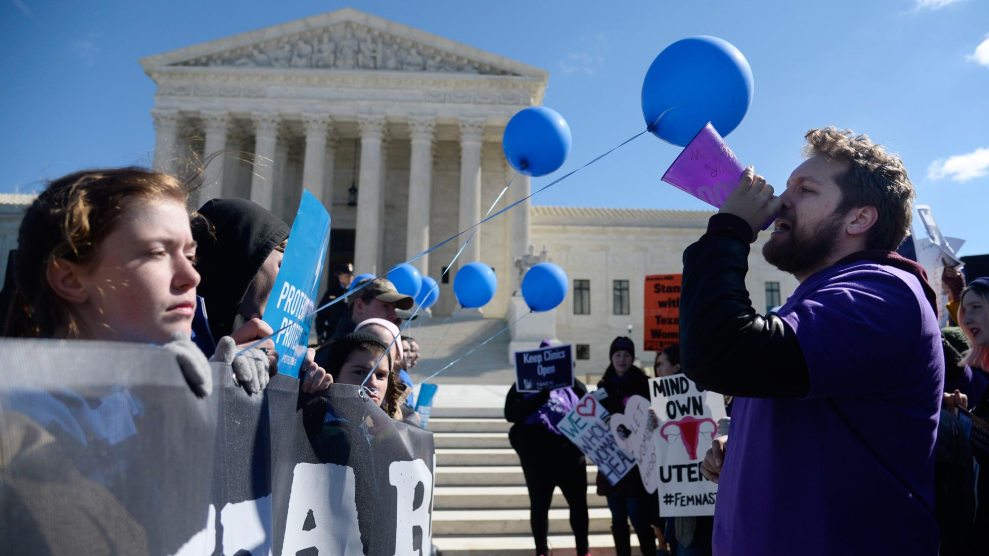 In recent years, Republican legislators in more than a dozen states around the country have passed laws that require doctors to say specific, misleading statements to abortion-seeking patients before performing the procedure—from requiring doctors to perform sonograms and describe them to patients, to mandating that they tell patients that a pre-viable fetus will feel pain, that there are negative mental health consequences to abortion, or that there is a causal link between abortion and breast cancer. (These points have been widely discredited.)

On Monday, the Supreme Court accepted a case that could have major repercussions for this type of required speech by abortion providers, and it comes from an unexpected group of plaintiffs—anti-abortion crisis pregnancy centers, facilities that are usually religiously affiliated and, though advertised as health care clinics, do not offer abortion and often also lack medical licenses or certified staff.

The case—National Institute of Family and Life Advocates (NIFLA) v. Becerra—will come down to the First Amendment rights of health professionals. The Supreme Court will consider whether a 2015 California law that requires religious-affiliated crisis pregnancy centers to post notices regarding the availability of abortion violates the First Amendment right to free speech. But by ruling on this case, the Supreme Court may also lay a foundation for advocates of reproductive rights to challenge the anti-choice restrictions on abortion providers’ speech in other states.

“When the court is looking at whether the state can make crisis pregnancy center doctors say certain things, the flip side of that issue is can the state make doctors who provide abortions say certain things,” says Andrew Beck, a senior staff attorney with the ACLU’s reproductive freedom project.

This case was filed by a group representing 110 crisis pregnancy centers challenging a California law, dubbed the Reproductive FACT Act, which requires some licensed or unlicensed medical facilities—including those like the CPCs, which object to abortion on religious grounds—to post notices inside clinics mentioning the availability of contraception and abortion. Unlicensed centers had an added requirement of notifying patients that they don’t have a California medical license.

The notice required by the FACT Act said the following:

California has public programs that provide immediate free or low-cost access to comprehensive family planning services (including all FDA-approved methods of contraception), prenatal care, and abortion for eligible women. To determine whether you qualify, contact the county social services office at [insert the telephone number].

The crisis pregnancy centers sued over the law in each of California’s four district courts, alleging that the FACT Act was unconstitutional because it violated both their right to free speech and free exercise of religion under the First Amendment. In all four cases, the 9th Circuit disagreed, allowing the law to go into effect because, the court ruled, the state has a right to regulate professional speech, and the required sign did not encourage abortions, but rather simply stated that the procedure is available.

The 9th Circuit’s decisions conflicted with decisions from other federal courts in recent years around compelled speech by medical professionals. The 11th Circuit ruled in February that a Florida law prohibiting doctors from asking their patients about gun ownership was unconstitutional, and in 2014 the 4th Circuit struck down a North Carolina law that required doctors to perform a sonogram before providing an abortion and to describe the image to the patient. Other challenges to ultrasound laws are winding through the courts.

Now the high court will have to wade into the question of whether states can regulate professional speech by medical professionals. This particular case may prove especially challenging for the justices that tend to rule against abortion rights because, depending on the scope of the court’s decision, a win for the crisis pregnancy centers in this case could also provide a legal foundation that’s a win for pro-choice groups who oppose laws requiring speech by abortion providers. That potential double-edged sword also means that some reproductive rights groups are still evaluating where they will stand on the case. “We have not fully come up with what our position is going to be,” says Kelli Garcia, senior counsel at the National Women’s Law Center. “But what we would hope for is a ruling that does protect and ensure that women should be able to get the full range of reproductive health services, and that crisis pregnancy centers aren’t in a position of being able to lie to them.”

Planned Parenthood said the high court should uphold the lower court’s decision on the FACT Act. “The Supreme Court should affirm the Ninth Circuit’s ruling and safeguard every person’s right to accurate medical information, free from bullying, shame, and deception,” Dawn Laguens, the executive vice president of Planned Parenthood Federation of America, said in an emailed statement. “Everyone deserves to have support, compassion, and unbiased information to make the pregnancy decision that’s best for their health and well-being.”

The Supreme Court is already hearing a number of free speech challenges in the current term. Next month, the court will hear the case of a baker in Colorado who was charged with violating state civil rights laws after refusing to bake cakes for same-sex weddings. The court also accepted two other First Amendment challenges on Monday—Minnesota Voters Alliance v. Mansky, which is about a Minnesota law prohibiting political messages at polling places, and Lozman v. City of Riviera Beach, about the 2006 arrest of Fane Lozman at a Florida city council meeting after he refused to stop talking about corruption.

NIFLA v. Becerra is Justice Neil Gorsuch’s first abortion-related case since his appointment to the Supreme Court. Gorsuch has not spoken publicly about his own views on abortion, but is expected to be an ardent opponent of abortion, based on writings in his 2009 book about fetal personhood and assisted suicide. The justices will hear arguments in NIFLA v. Becerra early next year.