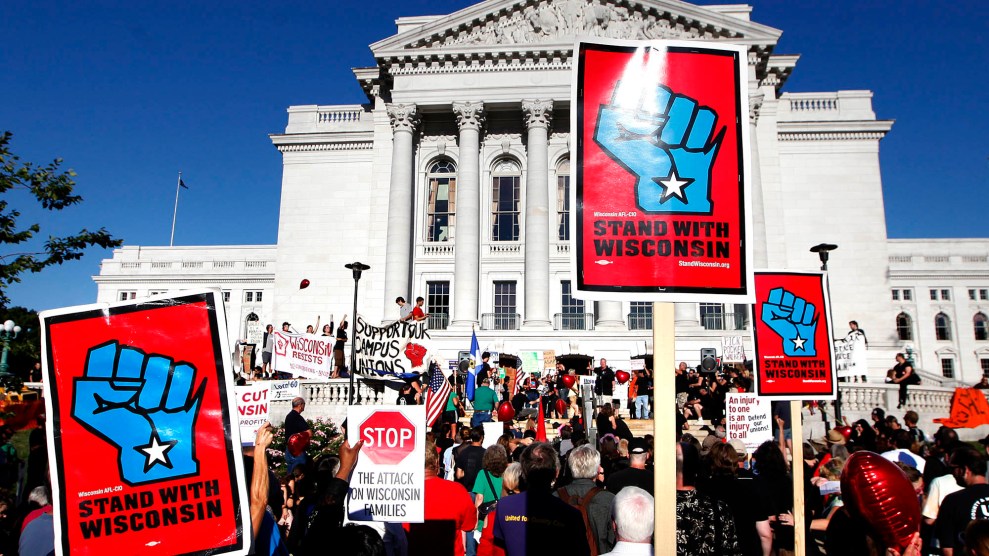 In the six years since Wisconsin Gov. Scott Walker signed the union-busting Act 10, which curtailed collective bargaining rights for public employees, the state’s labor movement has been decimated. Wisconsin was once a leader in organized labor, but its share of workers belonging to unions plummeted from 14.2 percent in 2010 to 8.1 percent in 2016. In 2015, the state’s unionization rate dropped below the national average for the first time.

Now a new study highlights the unintended consequences of Act 10, which has proven catastrophic for Wisconsin’s public schools.

As I explained in the March/April issue of Mother Jones, Wisconsin’s attack on public sector unions has created a shortage of public school teachers, as teachers retire and look for jobs in other states and fewer young people embark on careers in education:

The school of education at the University of Wisconsin-Madison never used to have trouble attracting applicants with dreams of becoming teachers. Its graduate program is ranked fourth in the country by U.S. News & World Report, and until recently, its undergraduate program in elementary education typically received between 300 and 400 applications for its 125 spots. Now, says Michael Apple, a professor in the program, it only gets about one applicant per opening.

A new study from the left-leaning Center for American Progress (CAP) offers a new set of numbers to quantify the effects of Act 10 on public education in Wisconsin. Median compensation—salary and benefits—was $10,843 lower in the 2015-2016 school year than before Act 10, a 12.6 percent reduction.

The teachers who are still working in the state are far less experienced than before Act 10. According to the report, 24.1 percent of teachers have been working for fewer than five years, a spike from 19.6 percent of teachers prior to Act 10. And those remaining teachers are shifting around within the state at a higher rate, switching school districts rather than building up local connections. The CAP study refers to other research which has concluded that most of the turnover has been people voluntarily moving on, rather than people getting fired.

“Rather than encouraging the best and the brightest to become teachers and remain in the field throughout their career,” Wisconsin state Senate Democratic Leader Jennifer Shilling said during a press call on Wednesday, “Act 10 has demonized and devalued the teaching profession and driven away many good teachers. These serious implications have left schools across Wisconsin struggling to fill teaching positions.”

That shortage is only starting. As time goes on and fewer people enter the field, the state’s school districts will struggle to find teachers to fill open slots. Already for the 2016-2017 school year, the state’s Department of Public Instruction had to relax the rules for teacher licenses so that more people could get one-year emergency approval to fill shortages.

Meanwhile, earlier this month Walker announced his intention to run for a third terms as governor. “I love traveling the state and hearing how the things we’re doing are helping,” Walker said in a digital ad kicking off his reelection campaign. “But there’s more to be done. Investing in training for our workers. Helping people create jobs. Making our schools even better.” But as he continues traveling the state, Walker will have to explain how the teacher shortage created by his anti-union law has improved schools.