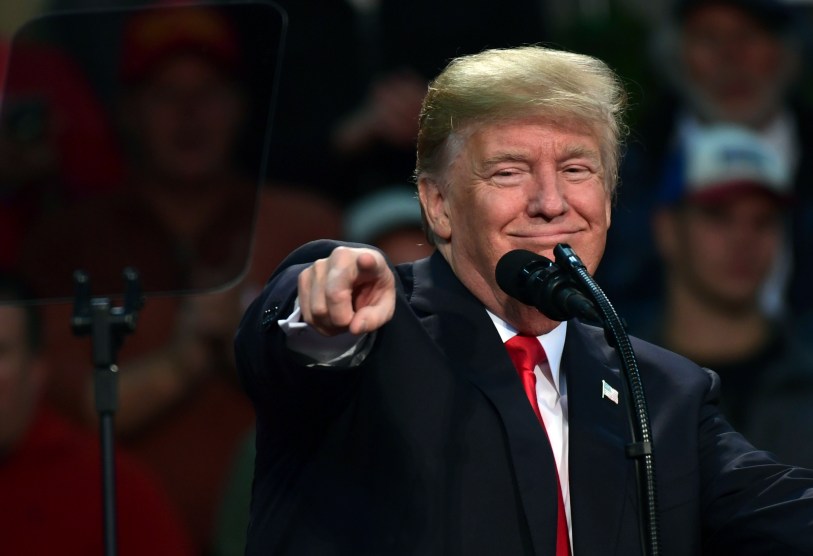 The Republican National Committee has joined President Donald Trump’s all-out attack on Sen. Kirsten Gillibrand, blasting out an email Tuesday containing opposition research about the New York Democrat. The RNC’s broadside follows a back-and-forth between Gillibrand and the White House over allegations that Trump—who was infamously caught on tape boasting about assaulting women—had engaged in multiple acts of sexual misconduct before becoming president.

The RNC jumps into the fray against Gillibrand. pic.twitter.com/8BdCWeJub4

Trump lashed out at Gillibrand in a crude tweet Tuesday morning, declaring that she had previously begged him for campaign donations and that she “would do anything for them.”

Lightweight Senator Kirsten Gillibrand, a total flunky for Chuck Schumer and someone who would come to my office “begging” for campaign contributions not so long ago (and would do anything for them), is now in the ring fighting against Trump. Very disloyal to Bill & Crooked-USED!

You cannot silence me or the millions of women who have gotten off the sidelines to speak out about the unfitness and shame you have brought to the Oval Office. https://t.co/UbQZqubXZv

White House Press Secretary Sarah Huckabee Sanders insisted Tuesday afternoon that Trump’s tweet was not a sexist innuendo and that the president was simply accusing Gillibrand of selling out her constituents in exchange for campaign contributions.

“There’s no way that this is sexist at all,” said Sanders. “This is simply talking about a system that we have that is broken in which special interests control our government. And I don’t think that there’s probably many people that are more controlled by political contributions than the senator that the president referenced.”

For its part, the RNC stuck mainly to Gillibrand’s policy positions in the oppo research it sent out Tuesday. The email, titled “Gillibrand’s Grift,” accused the New York senator of flip-flopping on a range of issues and of “obstructing President Trump’s agenda.”

Still, the email marks the second time in recent weeks that the RNC has rushed to back up Trump in a fight over sexual misconduct allegations. In November, the RNC cut off its fundraising support for Alabama GOP Senate candidate Roy Moore following accusations that Moore had sexually assaulted teenage girls—accusations Moore denies. But the RNC quickly reversed course earlier this month, once again throwing its support behind Moore after Trump endorsed him. As one RNC official told CNN at the time, “The RNC is the political arm of the president and we support the President.”