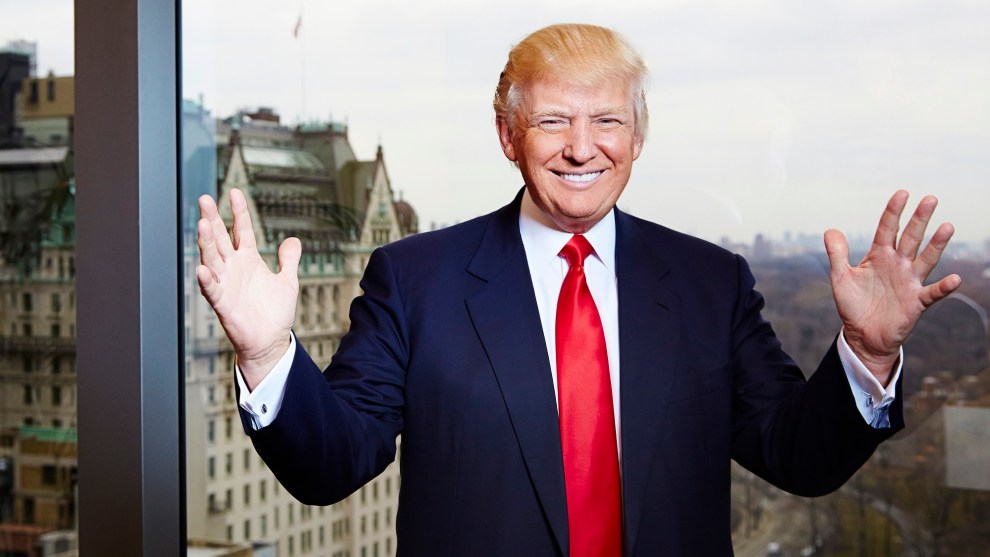 Many of the arguments that Republicans have used to sell their tax bill are completely implausible. There is overwhelming reason to believe, for example, that the tax cut won’t pay for itself. Then there’s President Donald Trump’s claim that the legislation will cost him a “fortune.”

Trump could prove today that he’s telling the truth by releasing his tax returns. He just chooses not to. And everything we know about his finances suggests he will actually save tens of millions of dollars in the years to come.

Trump will benefit from the tax cuts in many ways. First, there’s the reduction in the income tax rates. Instead of paying 39.6 percent on their income, top earners will now pay 37 percent. But for some Americans, including Trump, the real rate will actually be far lower. That’s because the GOP legislation allows many business owners to deduct 20 percent of their income. This new deduction—for so-called “pass-through” businesses whose profits are taxed as individual income—reduces the top rate to below 30 percent. Trump’s most recent financial disclosure form lists ties to more than 500 businesses that collectively make up the Trump Organization. His attorneys said last year that almost all of them are pass-throughs.

The Senate bill’s pass-through provision could have largely excluded Trump and other real estate developers by tying the amount of pass-through income they can deduct to how much their businesses pay in wages. But that was changed at the last minute; the final version of the bill will allow real estate companies that don’t have many employees to qualify for the 20 percent discount, too. James Repetti, a tax law professor at Boston College, told Bloomberg that the change was a “windfall” for Trump. (In any form, cutting taxes on business income is an unprecedented penalty against the vast majority of Americans who don’t own their own business and instead rely on wages and salaries for their income.)

Earlier this year, a leaked portion of Trump’s 2005 tax return showed that he earned $67 million from a category that includes real estate and partnerships. Four tax experts told Forbes that was likely pass-through income. Trump also reported an additional $42 million in “business income” that might have come from pass-throughs. If Trump has maintained this level of income, those figures suggest that he could save up to $11 million per year by using the new 20-percent discount on business profits.

The pass-through change will also help Trump’s sons Donald and Eric, who now run the Trump Organization. Jared Kushner, whose family has its own real estate empire, stepped down from 266 corporate positions before becoming a senior adviser to his father-in-law. His financial disclosure form shows that most of those positions were at pass-through companies. Ivanka Trump stepped aside from her own pass-through network to join the White House.

The tax cuts were almost an even bigger boon for the president and his family. Back in 2005, Trump didn’t actually pay taxes on a big chunk of his pass-through income. That’s because he wrote off millions of dollars in business losses. Because of these write-offs, Trump had to pay the Alternative Minimum Tax, or AMT—a safeguard designed to make sure wealthy Americans aren’t able to evade paying income taxes. Without the AMT, Trump would have saved an additional $31 million in 2005 and would have paid an effective tax rate of just 4 percent. Republicans and Trump initially planned to eliminate the AMT, but that change was left out of the final bill.

Similarly, the House version of the bill would have eliminated the estate tax entirely, potentially saving Trump’s heirs hundreds of millions of dollars. Instead, the final bill doubles the threshold at which the estate tax kicks in so that only the share of inheritances that exceeds $22 million is taxed at a top rate of 40 percent. The Trump family is likely to save more than $4.4 million from that change if they receive their inheritance before the individual tax cuts expire in 2026, or if Republicans extend them.

Trump has said the estate tax cut is in the bill because the “deal is so bad for rich people” that he had to “give them something.” In reality, the top 1 percent of American households will, on average, save $51,140 next year, according to the nonpartisan Tax Policy Center.

Overall, there is almost nothing in the legislation that would hurt Trump. Six tax experts told the Washington Post that he would “undoubtedly benefit” from the final bill. The one exception is likely to be a new $10,000 limit on deducting state and local tax payments from federal taxes. Daniel Shaviro, a tax law professor at New York University, said that he’s “not even aware of a single provision in the bill that disadvantages [Trump] or his family, other than the change to state and local tax deductibility.”

None of this has stopped Trump from telling supporters that “I think my accountants are going crazy right now.” He added that, unlike some of his wealthy friends, he didn’t care. For him, passing the tax bill was a “higher calling.”