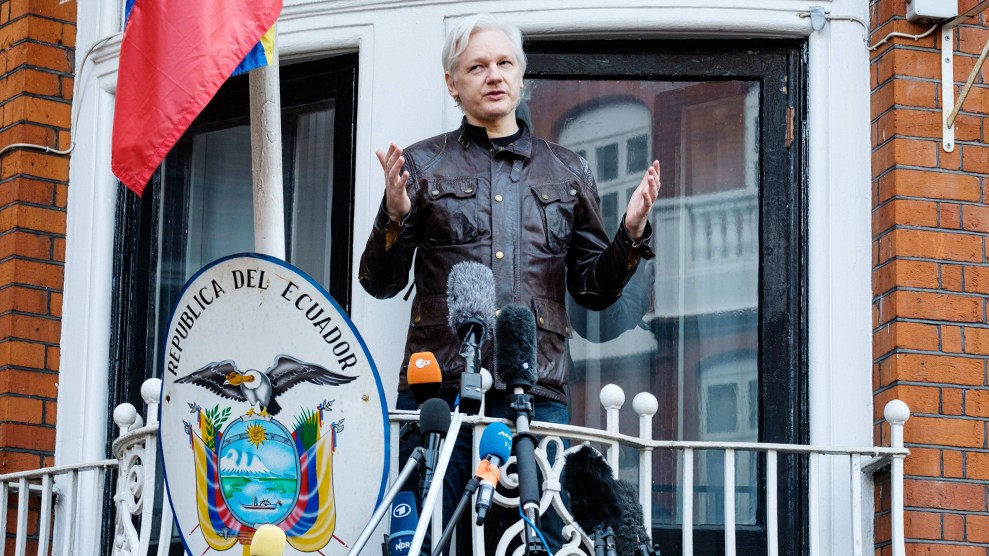 Julian Assange speaks to reporters in May 2017 after the Swedish government announced that it was abandoning its investigation.Ray Tang/Rex Shutterstock via ZUMA Press

Barry Pollack, the Washington, DC-based lawyer for Julian Assange, says he hasn’t heard a word seeking information from his client from special counsel Robert Mueller, the US Department of Justice more broadly, or any of the committees in Congress investigating Russian meddling in the 2016 elections.

“I have not heard anything, and there has not been any movement that I’m aware of,” Pollack tells Mother Jones.

Pollack is a criminal defense lawyer at Miller and Chavalier and Assange’s personal attorney for criminal matters in the United States—he has no direct association with WikiLeaks. For years he has tried to learn what actions, if any, the US government intends to take toward his client following WikiLeaks’ 2010 release of more than 250,000 classified diplomatic and military cables passed to the organization by Chelsea Manning.

“It continues to be status quo. The Department of Justice will not engage with me. They will not tell me what they’re doing, where are they are in the process, any information whatsoever, and have always told me if and when they get to the point where there’s something to discuss, they know where to find me,” Pollack says. “My phone has not been ringing.”

Assange has been holed up in Ecuador’s London embassy since 2012 after seeking refuge from extradition to Sweden, where authorities sought to question him on rape accusations. (Assange has said the accusations were a pretense to facilitate his extradition to the United States.) Swedish authorities dropped the investigation in May 2017 but reserved the right to reopen it, which Assange, speaking from the embassy’s small balcony, hailed as “an important victory.” The British government has said it will still arrest him if he leaves the embassy for skipping a bail hearing during an earlier asylum request, and Assange maintains he remains under threat of US extradition.

In April, the Washington Post cited anonymous US government sources who said that federal prosecutors were “taking a second look” at facts around the 2010 leak. That same month, CIA Director Mike Pompeo called WikiLeaks a “non-state, hostile intelligence service often abetted by state actors, like Russia,” and said that it was “wrong” to say that WikiLeaks’ publishing of classified US material is protected by the First Amendment.

It is unclear what role WikiLeaks will play in Muller’s investigation and findings, but as the publisher of John Podesta’s emails and thousands of other DNC documents allegedly obtained by Russian hackers, the organization might be pressed to reveal its source and its interactions with other actors in the scandal, setting off a titanic battle over its free speech and First Amendment rights.

Earlier this month, The Atlantic published Twitter direct messages between Assange and Donald Trump, Jr., in which Assange passed along a password to a yet-to-launch Mother Jones-related journalism project, asked Trump to promote WikiLeaks publications, suggested Trump leak his father’s tax returns to WikiLeaks, encouraged Trump to contest the presidential election results, and lodged a request that Trump pressure the Australian government to name Assange its ambassador to the US. Assange had reason to think he had a sympathetic ear in Trump, Jr. After all, his father repeatedly read from WikiLeaks releases during the campaign and proclaimed his “love” for the organization on stage.

A spokesperson for Mueller declined to comment. The Department of Justice “does not confirm, deny or comment on the existence of ongoing investigations,” an agency spokesperson tells Mother Jones. Representatives of congressional leadership of both committees in the House and Senate investigating the Russian matter either didn’t respond or declined to comment. Messages sent directly to both Assange and the WikiLeaks Twitter accounts went unanswered.

“I am totally in the dark,” says Pollack. “I have not heard anything, I don’t have any off the record information or even rumor. I have heard nothing about what it is they are doing or have done and they will not provide me any information.”