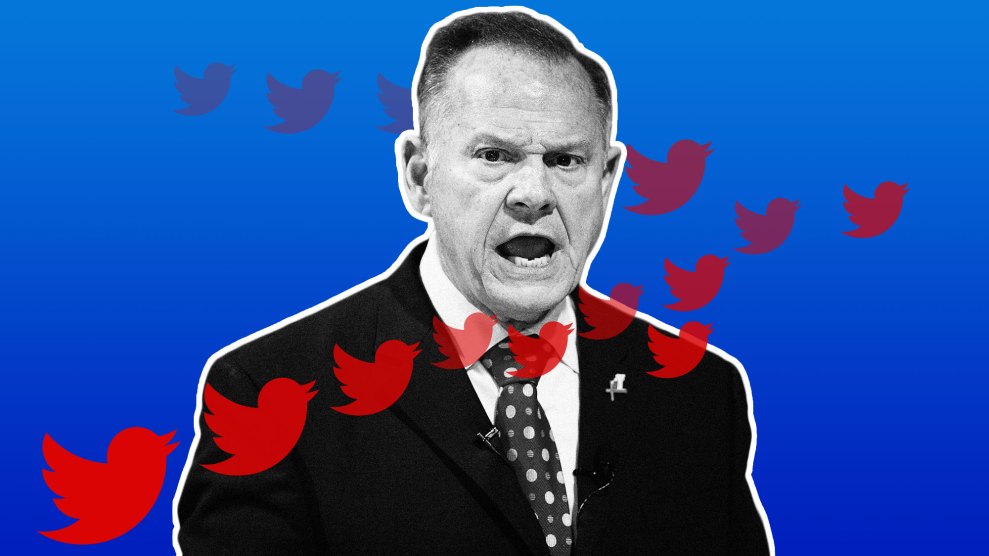 In the run-up to Alabama’s special election, Kremlin-linked news sites and trolls have battled vigorously on behalf of Roy Moore, the Republican candidate for US senator accused of sexual misconduct against multiple women, including teenage girls. Since allegations against Moore were first reported by The Washington Post on Nov. 9, Russian-linked Twitter accounts—including some operated by Russian news outlets RT and Sputnik—have attacked the credibility of the women accusing Moore as well as US news media reporting the allegations. During a week in mid-November, when sexual misconduct scandals were a top focus of these Kremlin-linked accounts, a majority of the content they pushed on the topic was in defense of Moore, according to the cyber security research project Hamilton 68: “Among pro-Moore articles, close to 70% attacked the credibility of the accuser(s), 38% attacked the media in general or the Washington Post in particular, and one story attacked Lindsey Graham for not defending Moore.”

The pro-Moore push has continued apace; this past weekend, #alabamasenaterace was among the top trending hashtags tracked on the Hamilton 68 dashboard, which is operated by the nonpartisan Alliance for Securing Democracy and monitors approximately 600 Twitter accounts linked to Russian influence operations. Those accounts push out 20,000 to 25,000 tweets every day, according to Bret Schafer, an analyst with the group. “The fact that this has continued for so many weeks means that this is clearly something the accounts have latched onto,” Schafer says of the Moore-related content. [Election Day update: Among the top content shared by the Russian-linked accounts on Tuesday, Dec. 12, was votejudgemoore.com, a URL redirecting to the Alabama secretary of state’s website.]

“Supporting Mr. Moore is another means to help Mr. Trump while stoking chaos in the US at the same time.”

The Kremlin’s ongoing “active measures” campaign on social media has aimed to sow confusion and chaos by supporting both far-right and far-left interests in American politics. The Alabama election presented a ripe opportunity, according to former senior CIA official John Sipher, now an expert with the national security group Cipher Brief. “In the case of Moore, the Russians certainly assess that the hyper-partisan and heated campaign is pitting Americans against each other and they want to do all they can to add fuel to the fire,” he says. “They likely assess that a Moore victory will bring the fight to Washington and further weaken the strained US political system.”

Moore’s candidacy has the full-throated backing of President Donald Trump, who has consistently refused to acknowledge the Kremlin’s cyber meddling in US elections and has repeatedly called those efforts “a hoax,” contrary to the consensus of the entire US intelligence community.

The digital activity around the Alabama senate race, says Sipher, is a continuation of Russian President Vladimir Putin’s strategy of exploiting social media and a bitterly charged political atmosphere in America. “Supporting Mr. Moore is another means to help Mr. Trump while stoking chaos in the US at the same time,” he says.

Moore has joined Trump in openly expressing a personal affinity for Putin. In an interview with The Guardian this summer, Moore praised Putin’s opposition to same-sex marriage, saying “Maybe he’s more akin to me than I know.” Several weeks after his comments, more than a thousand Russian-language Twitter accounts suddenly started following Moore’s official account. His campaign said it didn’t know why, and accused his Democratic opponent Doug Jones’ campaign of being behind the accounts. (The accounts were quickly deleted, reportedly by Twitter.)

When Trump and his supporters attack the FBI, a national security expert says, they are effectively helping the Kremlin with a key objective.

Russia’s continuing active measures on social media have also joined in on a rising attack by the Trump White House, Fox News and other Trump partisans against special counsel Robert Mueller and the FBI.

In the first week of December, Kremlin-linked accounts tracked by Hamilton 68 went on the attack in the wake of ousted Trump national security adviser Michael Flynn’s guilty plea to charges that he lied to the FBI about his conversations with the Russian ambassador after the 2016 election. The content sought to discredit the FBI by focusing on reports that an agent was removed from Mueller’s team for sending anti-Trump texts. Some accounts also pushed fake news that the Obama administration supposedly “green-lighted” Flynn’s December 2016 conversations with the Russian ambassador.

The FBI is the biggest threat to Russia’s intelligence activities against the US, Sipher says—which means that when Trump and his supporters attack the FBI, they are effectively helping the Kremlin with a key objective. “Anything the Russians can do to discredit or hurt the FBI helps their interests,” he notes. “Since the president has irresponsibly attacked the FBI and Justice Department, the Russians will look to pile on and inflict as much damage as they can. Even if President Trump does not fully understand the damage he is doing, the Russians do.”

National security and cyber experts tracking these continued Kremlin efforts say that the writing is on the wall for more trouble as the 2018 midterm elections heat up. “The biggest problem here in the US [in 2016] was that our political and cultural climate was polarized and easy to manipulate,” says Sipher. “Frankly, it was not hard to turn Americans against each other. In that sense, the Russians got lucky. They will keep doing what works and look for new means to sow discord.”