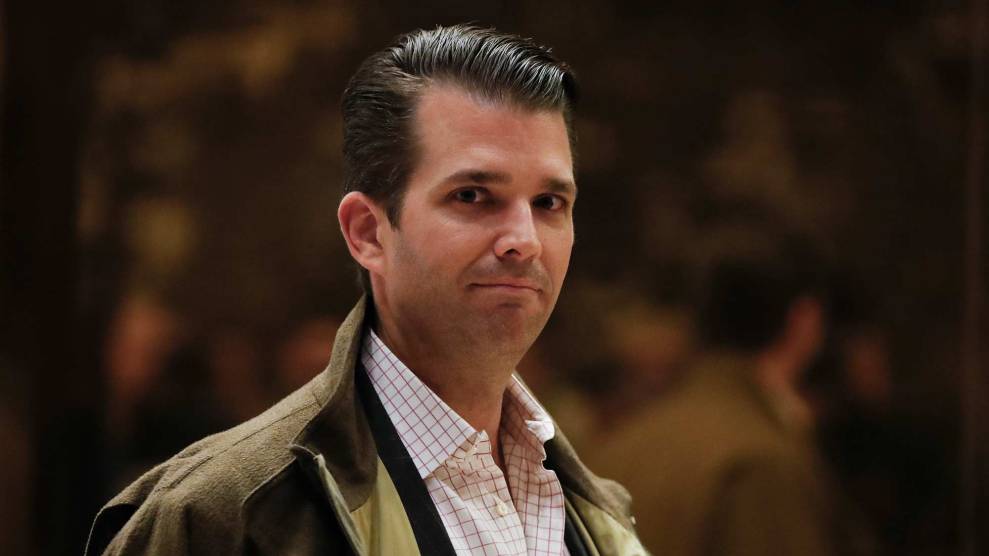 Donald Trump Jr. will face questions from two congressional committees in coming weeks about his multiple meetings with Russian representatives and his efforts to obtain damaging information on Hillary Clinton from the Kremlin.

Trump, the president’s eldest son, will meet Wednesday with members of the House Intelligence Committee. He is also scheduled to appear this month before the Senate Intelligence Committee, Senator Richard Burr (R-N.C.), the committee’s chairman, told Mother Jones. Committee aides declined to specify the date of the Senate interview. Alan Futerfas, Trump Jr.’s lawyer, did not respond to questions.

The interviews, both of which will occur behind closed doors, come as investigations into the Trump campaign’s contacts with Russia last year accelerate in the wake of special counsel Robert Mueller’s charges against four Trump associates, including former national security adviser Michael Flynn and former Trump campaign chairman Paul Manafort. Trump Jr. will face questions on at least three aspects of the campaign’s suspected coordination with Russia.

A congressional source said that investigators want to quiz Trump on his meeting last year at the National Rifle Association’s annual meeting in Louisville, Ky., with Alexander Torshin, a deputy governor of the Russian central bank and an ally of Russian President Vladimir Putin. Torshin, who has denied charges by Spanish officials that he laundered money in Spain for a Russian organized crime group, made a series of overtures to the Trump campaign last year, apparently on behalf of the Kremlin. Torshin’s outreach was part of “a back-channel to President Putin’s Kremlin,” a conservative activist wrote in a May 2016 email to Rick Dearborn, a longtime aide to then-Sen. Jeff Sessions (R-Ala.), who was a leading Trump backer, according to a recent New York Times report.

Not long after meeting with Torshin, Trump Jr. attended a now infamous June 2016 meeting at Trump Tower with a Russian lawyer, Natalia Veselnitskaya, who Trump Jr. had been told was offering damaging information on Hillary Clinton provided by the Kremlin in a bid to boost the Trump campaign against Clinton. Both intelligence committees will question Trump Jr. about that meeting, which his brother-in-law Jared Kushner and Manafort also attended. Despite intense scrutiny of the campaign’s ties to Russia, Trump Jr. and the other officials kept the meeting secret for more than a year until news of the gathering broke last July.

The Senate Intelligence Committee already completed interviews with all other available participants in the Trump Tower which means that they will grill Trump Jr. armed with fairly detailed knowledge of the gathering.

Congressional investigators also want to question Trump Jr. about his communication in the fall of 2016 with a Twitter account run by WikiLeaks. At the time the group was releasing batches of emails stolen from the Gmail account of Clinton campaign CEO John Podesta. US intelligence agencies have concluded that hackers tied to the Russian government obtained the emails and shared them with WikiLeaks.

When the group contacted Trump Jr. via direct message in September 2016, he initially expressed confusion, telling a group of Trump campaign officials that he had received “a weird twitter” and was unsure of its legitimacy. But Trump Jr. responded to the requests from WikiLeaks, posting a link the group sent him and appearing to convince his father to tweet about the group’s findings. Trump Jr. also requested information from the group about an upcoming release of emails that WikiLeaks suggested would damage Clinton.