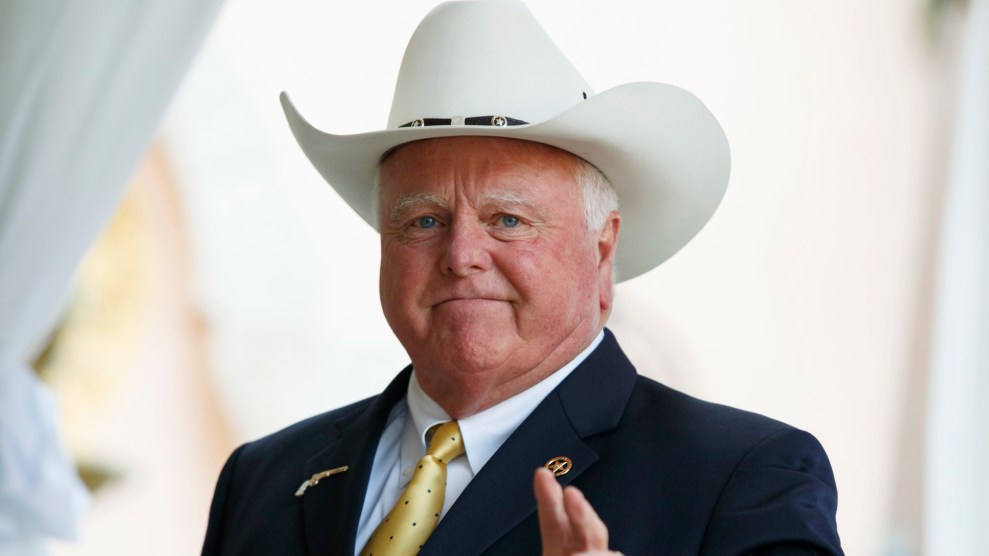 Remember Sid Miller, Texas’ cowboy hat wearin’, Trump-lovin’ agriculture commissioner?  This time a year ago, Miller was working hard to flatter his way to the top agriculture spot in the incoming presidential administration. But after being passed over for that post, Miller will instead have to fight to keep his current job: Last week, news surfaced that he faces a primary challenge from within the Republican Party.

His new rival, Trey Blocker, served as an aid to then Gov. George W. Bush in the 1990s and has since built a career as a lobbyist in the Texas Legislature in Austin, with clients ranging from seed/pesticide giant Monsanto to Walmart to a slew of fossil fuel companies. You might think that someone with such a resume might campaign as a technocrat eager to make Texas respectable again for agribusiness.

After all, the incumbent’s brand is built on buffoonery. Miller has, for example, tried to bill Texas taxpayers for a trip to Oklahoma to receive a medical procedure known as “the Jesus shot”; called Hillary Clinton a “cunt” in a tweet; picked former rocker/reality TV personality and longtime gun nut Ted Nugent as the co-chairman and treasurer of his 2014 campaign—and re-upped that bold staffing decision for the current campaign; and rolled back bans on deep fryers and soda machines in public schools.

But this is Texas. So Monsanto’s man in Austin is, naturally, attacking Miller from the right. And if you’re wondering about where Blocker stands on the farming issues facing Texas—the slow recovery from Hurricane Harvey, horrible conditions and low wages for farm workers, crop destruction from pesticide drift—prepare to be flummoxed. Blocker is focusing his campaign on issues that have little or nothing to do with the Texas agriculture department: god, guns, and immigrants.

In a recent campaign video (hat tip Texas Observer), Blocker portrays Miller as a big-government proponent who has used his time in office to enrich the Texas Ag Commission’s coffers at the expense of farmers and ranchers.  Blocker then brandishes, loads, and fires a rifle while his voice-over professes “deep Christian values” and boasts that while still in law school, he “sued 31 liberal mayors across the country to protect our right to keep and bear arms.” Blocker goes on to lash out at immigrants (despite having noted that his “forefathers came over here from Germany”), denouncing sanctuary cities and calling for a “moratorium on current levels of immigration.”

At first glance, anti-immigration zealotry seems an odd stance on which to stake a campaign against Miller, whose campaign site recently bragged that he’d won the endorsement of disgraced former Arizona sheriff Joe Arpaio, a nativist icon.

But Miller has at times waxed moderate on immigration, perhaps because Texas’ farms and ranches rely so heavily on migrant labor. In February, for example, Miller told the The Texas Tribune):

“I don’t want to cut off all migrant workers. It’s just not going to work for agriculture,” he said. “It’s part of our workforce, and Donald Trump uses the same workforce in his businesses. He has groundskeepers and landscapers and custodians and maids in his hotels and cooks and dishwashers—a lot of those are migrant workers.”

Such musings could well leave Blocker an opening among the Texas GOP base, which overwhelmingly supports harsh immigration policies.

For his part, Miller recently fired back at Blocker. He trolled him on Facebook as a devotee of suspect Austin cafes:

And in a statement to The Texas Tribune, Miller declared Blocker a “low-level lobbyist” who is “mired in the Capitol swamp.”

Of course, back in 2013, Miller himself set up shop as a lobbyist, right after exiting the Texas Legislature (where he was a founding member of the Tea Party Caucus) and before winning election as ag commissioner. That’s Texas for you.