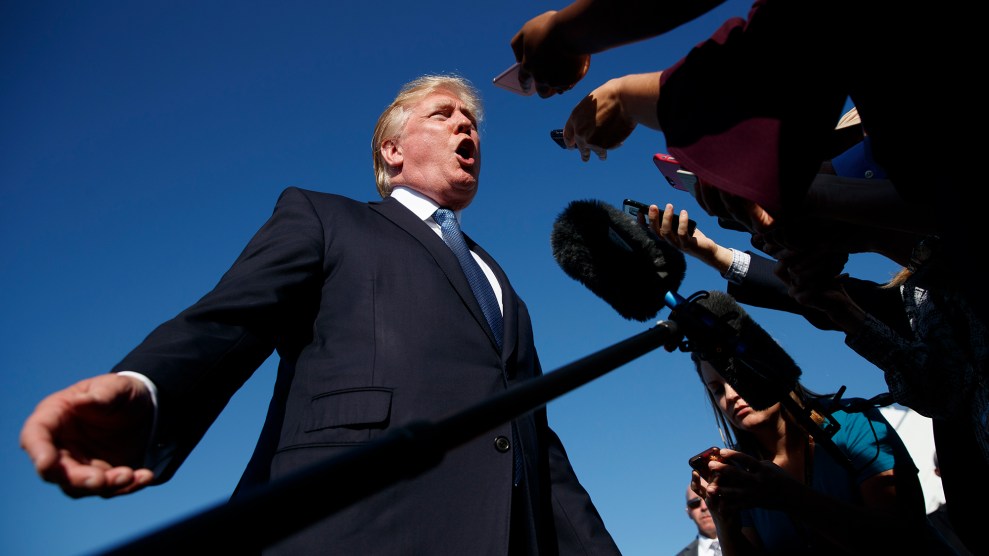 Throughout Donald Trump’s first year as president, I’ve kept a running record of his authoritarian behavior titled “Trumpocracy.” A major component of this now very lengthy document has been his ceaseless attack on the American news media. But although Trump’s rants against reporting he dislikes are at this point extremely familiar (or daresay, normal), his assault on the free press has intensified in recent days. For Trump, if it’s not Fox News then it’s Fake News—and that now means war on a very personal level. Over the past two weeks, Trump has singled out no fewer than four individual journalists for bullying and ridicule, while his press secretary has threatened a fifth:

Meanwhile, during this same period, Trump repeatedly praised content from Fox News and personally promoted a new book by a Fox host—part of another long-term pattern:

Trump also recently attacked the credibility of CNN International, no doubt to the delight of the multiple autocrats and dictators he’s praised from around the world.

It's not CNN's job to represent the U.S to the world. That's yours. Our job is to report the news. #FactsFirst 🍎

That disparagement of a major global outlet for American news reporting came just two weeks after Trump shared a laugh with President Rodrigo Duterte as the Philippines strongman mocked journalists as “spies.” (Trump pulled a similar move in July with Vladimir Putin.) And Trump’s tirades against “fake news” are having a global impact, as the Times’ Steven Erlanger reported this week, emboldening unsavory regimes: After CNN aired video in November that showed a migrant in Libya being auctioned as a slave, Libyan leaders responded by citing Trump’s attacks against CNN in an effort to undermine the network’s reporting.

Trump’s stepped-up assault dovetails with a rising wave of attacks by Fox News and other unabashedly pro-Trump outlets against the Mueller investigation.

Trump has never stopped building on his declaration shortly after his inauguration that the media is the “enemy of the American people.” (That Stalin-esque comment was the uppercut to his former chief of staff Steve Bannon’s initial jab that the media was “the opposition party” and should “keep its mouth shut.”) But the stepped-up blows now—which have further included Trump bashing the press as “a stain on America” and proposing a competition among TV networks for a “FAKE NEWS TROPHY”—are also no coincidence. Most of the vitriol has followed the announcement of a plea deal between the disgraced Flynn and special counsel Robert Mueller, whose investigation into all things Trump-Russia has since surely struck fear into the White House.

Trump’s impulse to punch back even harder at the press also dovetails with a rising wave of attacks by Fox News and other unabashedly pro-Trump outlets against the Mueller investigation. As Trump seethes that the FBI is “in tatters,” Fox pundits liken the bureau, perhaps with a touch of projection, to “the old KGB that comes for you in the dark of night.” As Trump mocks the US “Justice” Department for allegedly failing to prosecute his former presidential opponent more than a year later, Fox pundits fervently demand the arrest of top FBI and DOJ officials.

“These are bad people. These are very, very bad and evil people.”

Trump echoed such propagandizing in his speech in Pensacola last Friday, denouncing his perceived enemies among a “corrupt” and “rigged” system in the nation’s capital. “There are powerful forces in Washington trying to sabotage our movement,” he inveighed. “These are bad people. These are very, very bad and evil people. They know who they are….They will lie and leak and smear because they don’t want to accept the results of an election where we won by a landslide.”

Who knows whether Trump really views his presidency as fodder for a daily television show, as the Times recently reported in a piece citing 60 sources. But of course, what’s at stake with Trump’s unprecedented war on reported facts could not be more starkly real-world. The danger of ill-informed fear and panic that could potentially arise from, say, a president subverting the mainstream media less than two hours after a terrorist attack on an American city, as Trump did on Monday, is disturbing to ponder.

Where Trump’s information warfare will take the country remains an open, if unsettling question: As journalists have risen to the challenge of his lies and attacks, recent polling suggests the American public has greater confidence in the Fourth Estate than in the Trump White House, though that attitude appears less to straddle a sharp partisan divide.

But part of this equation is already clear. Trump loathes media he views as unfavorable to him—and he won’t hesitate to further weaponize that contempt against a pillar of American democracy.