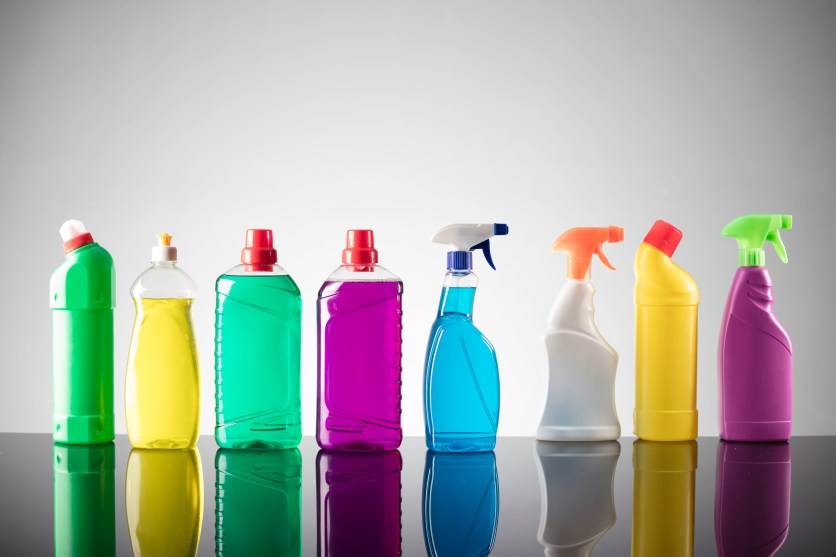 Peruse the ingredients list of your air freshener, floor polish, or multi-surface cleaner, and you’ll likely come across an “f” word: fragrance. You know what it means—whatever the manufacturer added to make your house smell nice—but what does it stand for?

California State Sen. Ricardo Lara, who authored the bill, remembers his mother “telling me stories about how she’d feel sick or dizzy after a day of cleaning bathrooms and other people’s homes.”

Turns out, the “f” word could stand for one or more of 3,000-plus chemicals. Under a federal rule that protects manufacturers from revealing “trade secrets,” companies haven’t had to disclose those ingredients, even if they’re, say, known carcinogens, or if they impair fetal development. But in California—and, in effect, the rest of the country—that’s about to change.

In October, California Gov. Jerry Brown signed the Cleaning Product Right to Know Act; as part of a bundle of more than 850 bills signed on the same day, it largely flew under the radar. Starting in 2020, manufacturers of cleaning solutions, air fresheners, and products used to clean cars will need to disclose certain toxic chemicals online. The following year, they’ll also have to list those chemicals on product labels.

The law doesn’t apply to all fragrance chemicals. Known allergens and ingredients on the California Department of Toxic Substances Control’s list of harmful chemicals—around 2,300 compounds in total—must be disclosed. Those include phthalates and perchloroethylene, both of which have been known for decades to cause cancer, and both of which are extremely common fragrance chemicals in everyday cleaning products. The remaining fragrance ingredients that aren’t known to be harmful only need to be listed if they make up at least 0.01 percent of the product.

“We see this as a first step toward safer formulation,” says Samara Geller, an analyst at Environmental Working Group, which co-sponsored the bill. Knowing what’s in a product, she says, is necessary to “evaluate the exposures, evaluate the ways these chemicals are getting into our bodies, and evaluate how they’re impacting the environment.”

State Sen. Ricardo Lara, who authored the bill, says his mother motivated him to shepherd it. After immigrating to the United States from Mexico, she cleaned houses for a living. “I remember her telling me stories about how she’d feel sick or dizzy after a day of cleaning bathrooms and other people’s homes,” he says. “She never questioned that there might have been a link to the products she was using.”

The new law may affect products not just in California, but across the country. Those who crafted the bill say it’s unlikely that manufacturers will create two different labels for their products—one for California, one for the rest of the country—and, in any case, consumers will be able to find ingredients online.

The Consumer Specialty Products Association, the trade group for some of the world’s largest cleaning-product companies, initially opposed the legislation. But after hammering out a compromise with advocacy and labor groups, it came around in favor. Steve Caldeira, CSPA’s head, went so far as to call the new law a “national model.” Environmental and health advocates say the two-year delay for full disclosure—giving manufacturers time to reformulate their products—was crucial to getting the industry on board.

In the meantime, other states are pushing for their own disclosure laws. Minnesota legislators authored an ingredient disclosure bill earlier this year (the bill didn’t make it to a vote). In New York, a seemingly forgotten law from 1971, which gave the state the authority to regulate the labeling and ingredients of household cleaning products sold in the state, is starting to finally be put to use. The state’s Department of Environmental Conservation may soon require manufacturers to post all their products’ harmful ingredients online—if it does, then about a fifth of the US population would live in a state where nearly-full ingredient disclosure for cleaning products is the law of the land.

Where does this leave other kinds of products with fragrances—like shampoos, makeup, perfume, cologne, and deodorant? Those products aren’t covered by the California law, but the law could serve as a springboard for efforts to disclose fragrance ingredients in other products.

Janet Nudelman, director of program and policy at Breast Cancer Prevention Partners, another co-sponsor of the new law, says she hopes that will happen. “We shouldn’t have to go product sector by product sector demanding different manufacturers adopt changes. We should just have a right to know, period,” she says. “But, unfortunately, that isn’t the way the world works.”