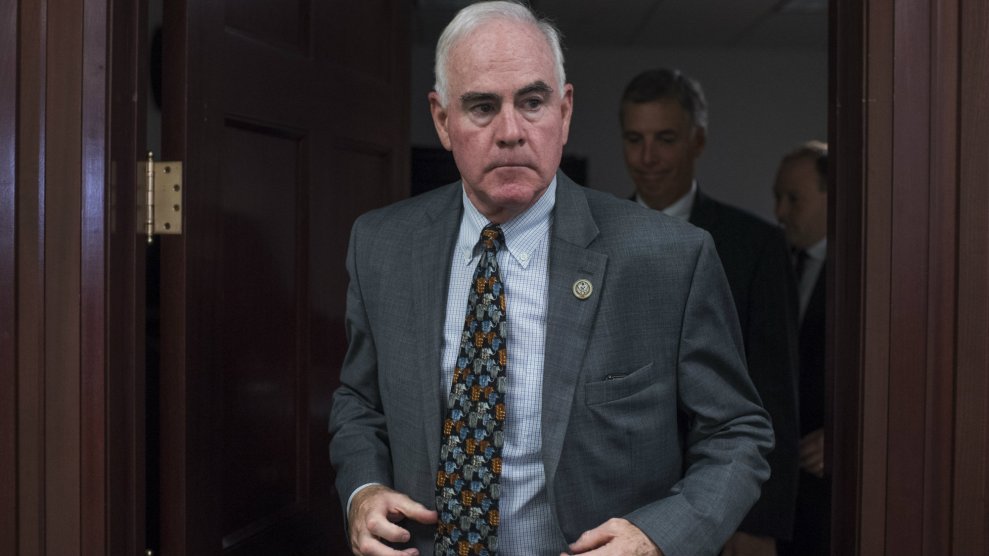 Rep. Patrick Meehan—who until recently was a member of the House committee investigating a flood of congressional sexual misconduct complaints—announced Thursday evening that he will not run for re-election following allegations that he was involved in a scandal of his own. Meehan’s planned retirement comes less than a week after the New York Times revealed that the Pennsylvania Republican had used taxpayer dollars to pay for a sexual harassment settlement with a much-younger former aid. On Tuesday, Meehan said he viewed the woman as a “soul mate” but denied sexually harassing her.

Meehan, 62, is at least the 15th elected official who has announced within the past year that he would resign, retire or not seek re-election following accusations of sexual misconduct. In October, his Pennsylvania colleague Rep. Tim Murphy resigned after allegations emerged that Murphy, a pro-life Republican, had urged a woman he was having an affair with to get an abortion.

Last week, the Times reported Meehan had settled the case after the former aide accused him of making unwanted romantic advances. According to the Times, Meehan first professed romantic interest in person and then again through a letter signed “With all of my heart, Patrick.”

.@RepMeehan voted against the GOP bill to repeal Obamacare partly to try to please a female aide he saw as his soulmate, per sources. He wrote to her that, on the day of the vote, “I had to say ‘no’ to @POTUS & to @SpeakerRyan, I got to say ‘yes’ to you”* https://t.co/Dvv1QkEGj5 pic.twitter.com/V6GkeNZQny

Meehan, who is married with three sons, allegedly grew hostile when the aide did not return his interest and she began a relationship with another man, the Times reported. After initiating a complaint and working remotely, the woman eventually quit. Exact details about the settlement the two parties reached are unknown, in part because the money came from a congressional office fund that can disguise such payments as salary and report them much later, according to the Times.

As a member of the House Ethics Committee, Meehan was involved in investigating sexual harassment in Congress, including misconduct claims against four current and former congressmen: Trent Franks (R-Ariz.), John Conyers (D-Mich.), Blake Farenthold (R-Texas) and Ruben Kihuen (D-Nev.). On Saturday, House Speaker Paul Ryan (R-Wis.) removed Meehan from the committee and ordered an investigation into the allegations.

“Though Mr. Meehan has denied the allegations, they must be fully and immediately investigated by the House Ethics Committee,” Ryan’s spokeswoman, AshLee Strong, said in a statement to Reuters.

“After consultation with my wife, Carolyn, and with my three sons, and after prayerful reflection, I write to inform you that I will not seek re-election to the United States Congress for the Seventh Congressional District in 2018,” Meehan wrote in his retirement letter Thursday, obtained by the Philadelphia Inquirer.

“No characterization of the work relationship I shared with a uniquely close colleague could have been more personally harmful than when I described that co-worker as a ‘soul-mate,'” wrote Meehan. “I truly didn’t even consider or understand the full implications of the use of that term.”