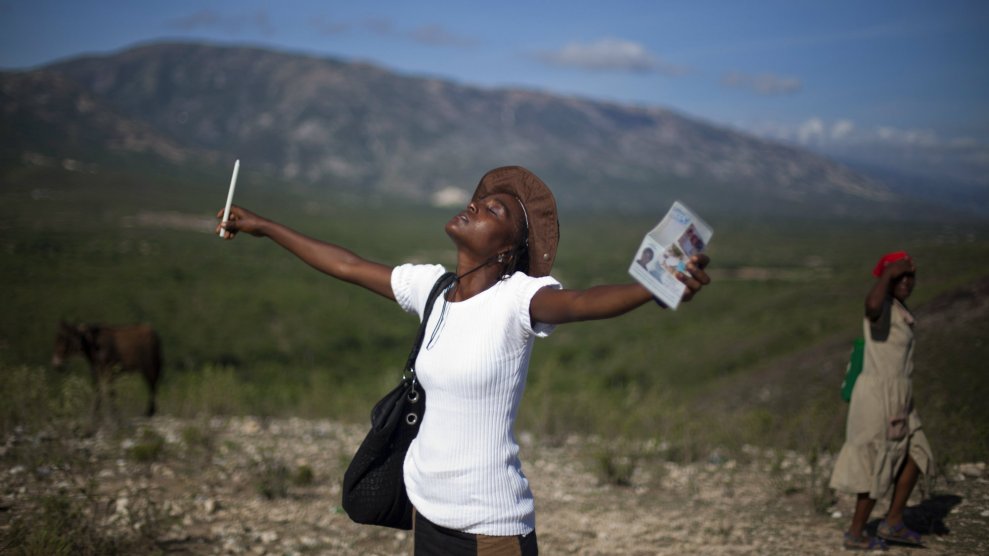 A woman prays during a pilgrimage in HaitiDieu Nalio Chery/AP

On Thursday, the Washington Post reported that President Donald Trump referred to El Salvador, Haiti, and African nations as “shithole countries” during a discussion with lawmakers about immigration protections. The White House subsequently released a statement that didn’t deny the comment, but on Friday Trump tweeted that he did not use the offending word. (He is not disputing, however, that he remarked during the meeting, “Why do we need more Haitians?”) Haiti, often referred to as the poorest country in the Western Hemisphere, suffers from poverty and inequality. But anyone who has actually been there, as I have because my parents are Haitian immigrants, can tell you it’s not a shithole—and that’s a miracle of sorts.

For centuries, the United States has meddled and intervened disastrously in Haitian affairs and against all odds the Caribbean nation hasn’t become a shithole because of it. Today, on the eighth anniversary of the devastating earthquake that killed hundreds of thousands, people all over the country are alive and well and making do with what they have.

In 1804, Haiti became the first black republic after defeating the French during a slave revolt. The United States panicked—what if American slaves got the same idea? In response, the United States didn’t recognize Haiti as a country until 1862.  The ensuing trade embargo and French demands that the new country pay reparations (which Haiti paid until 1947) would hinder the country’s development for decades to come.

After the assassination of President Vilbrun Guillaume Sam in 1915, President Woodrow Wilson sent US Marines to occupy Haiti; they stayed for nearly 20 years. During this time, 15,000 Haitians were killed by US forces.

In 1957, Francois “Papa Doc” Duvalier came to power. He ruled the country as a repressive dictator, using his special police force, the Tonton Macoutes, to brutalize citizens. Papa Doc’s brutal policies further strained the country’s relationship with the United States. After his death in 1971, his son Jean Claude “Baby Doc” Duvalier became the world’s youngest president at just 19. Relations between the United States and Haiti improved during this time period as President Ronald Reagan saw Baby Doc as a foe of communism. After Baby Doc was ousted in 1986, Haiti saw a series of coups and sudden leadership changes.

In 1983, the Centers for Disease Control and Prevention announced the four Hs, four groups that were at high risk for AIDS: homosexuals, hemophiliacs, heroin users, and Haitians. Though the CDC would later try to walk back the announcement, the proclamation destroyed tourism in Haiti and created a racist stigma that still persists today. Just last month, Trump reportedly said Haitians coming to the United States  “all have aids.”

In 1991, the Haitian military topped democratically elected Jean-Bertrand Aristide and began three years of a brutal reign. In 1994, the New York Times reported that a top official of this paramilitary regime was on the CIA’s payroll for two years while his associates were repressing Haitian citizens. During this time, Haitians were fleeing to the United States by the thousands, many by boat. While the Clinton administration had a policy for Cubans fleeing the Castro regime known as wet foot/dry foot (any Cuban who made it to dry land could stay in the United States), the policy was not applicable to Haitians. Though they were fleeing violence, the George H.W. Bush and Bill Clinton administrations turned most of them away.

By the 2000s, US policy toward Haiti remained the same. The US government helped keep the country’s minimum wage low at the behest of the corporations profiting off meager wages. After the earthquake struck, the Obama administration imposed a moratorium on the deportations of Haitians. Two weeks after the moratorium lifted, Hurricane Matthew struck the southern portion of the country, killing hundreds. President Barack Obama did not reinstate the moratorium, despite pressure from the Haitian community.

Because of the Clinton Foundation’s ties to Haiti, where it led fundraising and relief efforts, the country often came up during the 2016 election. In fact, Trump told a small group of Haitians in Florida that he wanted to be their “biggest champion” before he was elected. But his actions have signaled that his policy toward Haitians will be more of the same. His administration has ended a program that protects Haitians from deportation and allows them to work in the United States. By January 2019, more than 50,000 Haitians will have to leave or live in the country in the shadows. A champion, indeed.