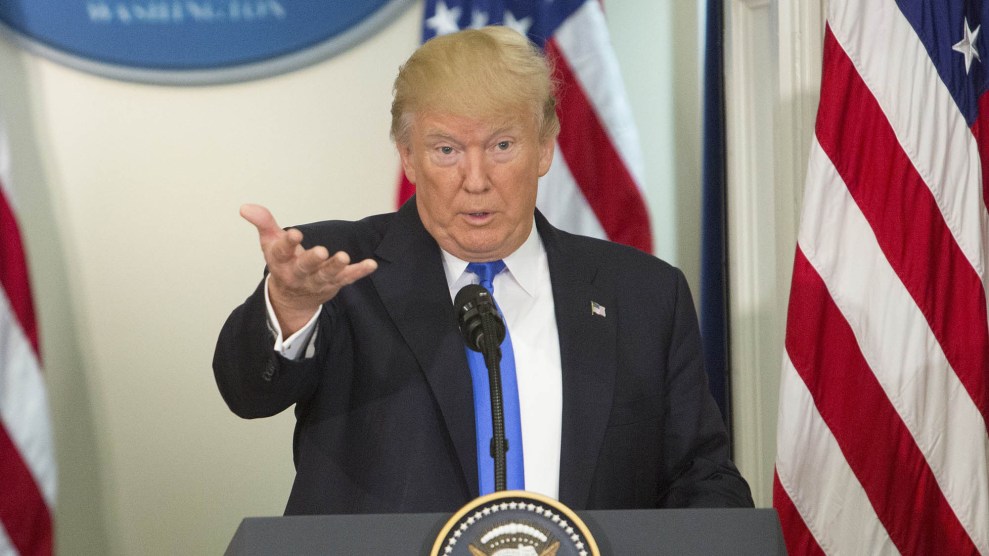 Donald Trump speaks at the first meeting of the Presidential Advisory Commission on Election Integrity in Washington DC, on July 19, 2017. Rex Features/AP

The bad news: the Administration is continuing its hunt for voter fraud, based on Trump’s false claim that “millions of people” voted illegally in 2016. Trump isn’t giving up on his quest to remove people from the voter rolls, the effort is just going underground. In his executive order disbanding the commission, Trump said its work would be handed over to the Department of Homeland Security. Kansas Secretary of State Kris Kobach, the commission’s vice chair, described it as a “tactical shift.” He said officials from Immigration and Customs Enforcement (ICE) would compare state voter rolls with federal immigration databases to search for non-citizens who are registered to vote.

The prospect of DHS leading a new probe into voter fraud is raising alarm bells among voting rights groups, who warn it could lead to people being wrongly accused of fraud and purged from the voter rolls. “The report that this effort will now be moved over to the Department of Homeland Security is baffling,” says Kristen Clarke, president of the Lawyers’ Committee for Civil Rights, which sent a Freedom of Information Act request to DHS in October requesting its dealings with Trump’s commission. “This was an agency that was set up to protect Americans from terrorism. Moving this commission over to DHS would be an abuse of the agency’s power.”

ICE has scant experience in this area and the federal databases Kobach wants DHS to use, such as the Systematic Alien Verification for Entitlements (SAVE) database, are not designed for that purpose and do not automatically reveal the status of immigrants who become US citizens, which means thousands of noncitizens who are subsequently naturalized could mistakenly be tagged as illegal voters. Indeed, during the Obama administration DHS warned states about using the SAVE database to remove voters from the rolls.

“Lags in updating databases once people attain citizenship plus poor matching procedures can dramatically inflate allegations of noncitizen voting, perhaps enough to please Trump,” tweeted University of Florida political scientist Michael McDonald. The NAACP Legal Defense Fund filed a FOIA with DHS on Wednesday seeking the extent of the department’s dealings with Trump’s commission, and in a federal lawsuit filed last fall the Legal Defense Fund noted that comparing federal non-citizen databases with state voter rolls “is not a reliable method to identify voter fraud, and it is likely to generate numerous false positives, with a disproportionate impact on voters of color.”

The DHS probe will also be largely conducted out of the public eye, making it immune from the type of public scrutiny and oversight that doomed Trump’s commission. “To the extent that they are now hoping to conduct their activities shrouded in secrecy, that’s deeply troubling,” says Clarke.

Indeed, Trump’s commission was doomed from the very beginning because of widespread public opposition to it. It was predicated on Trump’s false claim that 3 to 5 million people voted illegally in the 2016 election. When the commission was formed in May 2017, it was dominated not by respected election officials from both parties, but run by people like Kobach, who had a long history of pushing policies to restrict access to the ballot. Before the commission was formed, one of its eventual members, Hans von Spakovsky of the Heritage Foundation, wrote to the Justice Department that “mainstream Republican officials,” Democrats, and academics should be excluded from the commission. That’s largely what happened.

The commission’s first major action—an unprecedented request for sensitive voter data from all fifty states, including Social Security numbers, voting history, and criminal records—sparked an unprecedented backlash from Republican and Democratic states alike. The Republican secretary of state of Mississippi told Kobach to “go jump in the Gulf of Mexico.” Not a single state provided all of the voter data Kobach asked for; 21 states decided not to hand over any data to the commission. Groups like the Electronic Privacy Information Center, the ACLU, and the Lawyers Committee for Civil Rights immediately sued, alleging a wide array of federal privacy and transparency violations. The commission ultimately faced 15 federal and state lawsuits.

Kobach discussed his plans to request the sensitive voter data with two conservative activists who were eventually appointed to the commission, von Spakovsky and J. Christian Adams of the Public Interest Legal Foundation, without informing the rest of the commission before he sent letters to all 50 states. That secrecy and lack of transparency proved par for the course; in November 2017, a Democratic member of the commission, Maine Secretary of State Matthew Dunlap, sued the commission itself, claiming he was being kept in the dark about its activities. Before Christmas, a federal judge ruled in his favor. That accelerated the commission’s demise. The commission neither found nor released any evidence of widespread voter fraud.

Despite the Trump administration’s disbanding of the commission, the president himself is still pushing the myth of widespread voter fraud and advocating policies that restrict the right to vote. In a series of tweets on Thursday morning, Trump maintained “many people are voting illegally. System is rigged, must go to Voter I.D.” There is little evidence to support Trump’s claims. One major study found that there were only 31 credible cases of voter impersonation from 2000 to 2014 out of more than 1 billion votes cast. Voter ID laws, meanwhile, have been shown to block thousands of people from voting in states like Wisconsin, as Mother Jones has reported. A study by the University of Wisconsin found that Wisconsin’s voter ID law blocked or deterred up to 23,000 people from voting in the 2016 election in Milwaukee County and Madison’s Dane County—and up to 45,000 people statewide—with African Americans three times as likely as whites to be deterred from voting by the law.

Republican states are not likely to drop efforts to restrict access to the ballot, especially as they face the prospect of massive losses in 2018. Control of Congress in 2018, not to mention the presidential election in 2020, hinges in part on states like Arizona, Georgia, Indiana, Iowa, New Hampshire, Ohio, Wisconsin, and Virginia that have put new voting restrictions in place in recent years. On Wednesday, the New Hampshire legislature passed a new bill that could prevent thousands of college students from voting there.