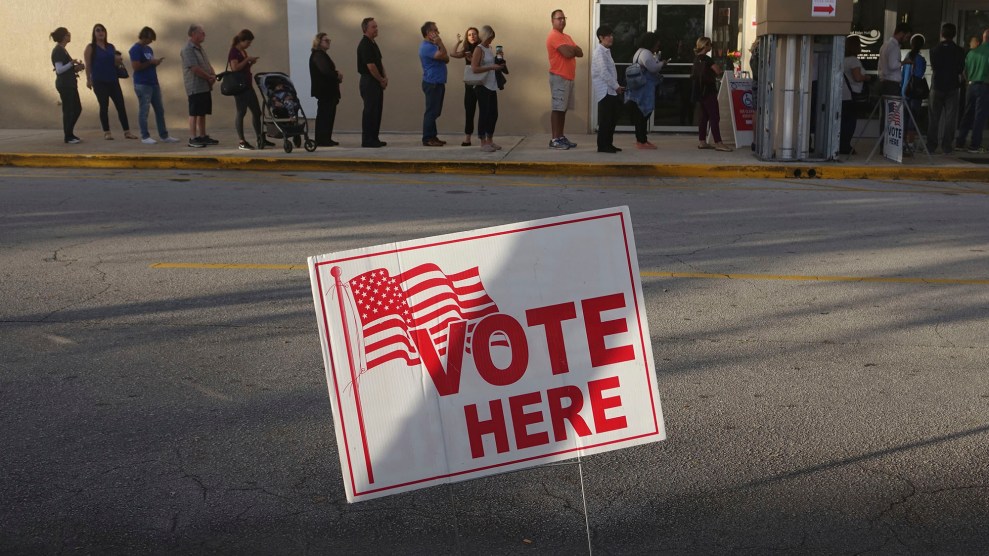 Across the United States, 6.1 million ex-felons can’t vote. More than a quarter of them live in Florida, including 1 in 5 otherwise eligible African American voters in the state. “Florida disenfranchises more of its citizens than Alabama, Georgia, Louisiana, Mississippi, North Carolina, South Carolina, and Tennessee combined,” the Brennan Center for Justice reports.

But this November, there will be a constitutional amendment on the ballot to overturn the state’s felon disenfranchisement law. Organizers with the voting rights group Floridians for a Fair Democracy announced on Tuesday that they had gathered the 766,200 signatures required to put the “Second Chances Voting Restoration Amendment” on the ballot. It would automatically restore the right to vote to ex-felons who have completed their sentences, except those convicted of murder or sexual assault. Sixty percent of voters will have to approve the amendment for it to pass. The ACLU has pledged to put $5 million behind the effort.

Florida is one of only four states that bar ex-felons from voting, along with Iowa, Kentucky, and Virginia. (In Virginia, Gov. Terry McAuliffe has restored voting rights to 168,000 ex-felons on a case-by-case basis.) Other states do not allow felons to vote until they have completed their sentences. Ex-felons in Florida must wait five to seven years before petitioning a clemency board, which includes the governor, to have their rights restored. Republican Gov. Rick Scott had restored voting rights to just over 2,000 former offenders as of October 2016.

Felon disenfranchisement was part of the Florida constitution adopted in 1868 that aimed to limit black voting rights. One Republican leader said the provision would prevent the state from becoming “niggerized.” It has long had a discriminatory effect on minority citizens, who are more likely to be jailed in Florida—and nationwide—because of disparate treatment in the criminal justice system. It has also been used to preserve Republican majorities in the state, since minorities (and by extension ex-felons) are more likely to vote for Democrats. In 2000, the state of Florida wrongly labeled 12,000 eligible voters as ex-felons and purged them from the voter rolls. That was twenty-two times George W. Bush’s 537-vote margin of victory over Al Gore. The purge likely cost Gore the election, as I reported in The Nation:

The US Civil Rights Commission launched a major investigation into the 2000 election fiasco, and its acting general counsel, Edward Hailes, did the math the best that he could. If 12,000 voters were wrongly purged from the rolls, and 44 percent of them were African-American, and 90 percent of African-Americans voted for Gore, that meant 4,752 black Gore voters—almost nine times Bush’s margin of victory—could have been prevented from voting. It’s not a stretch to conclude that the purge cost Gore the election. “We did think it was outcome-determinative,” Hailes said.

If the amendment passes, it has the potential to change the political makeup of the state. Donald Trump defeated Hillary Clinton in Florida by 112,000 votes. African American voters favored Clinton over Trump by a 84-8 margin. Currently, there are 500,000 African Americans disenfranchised in the state.