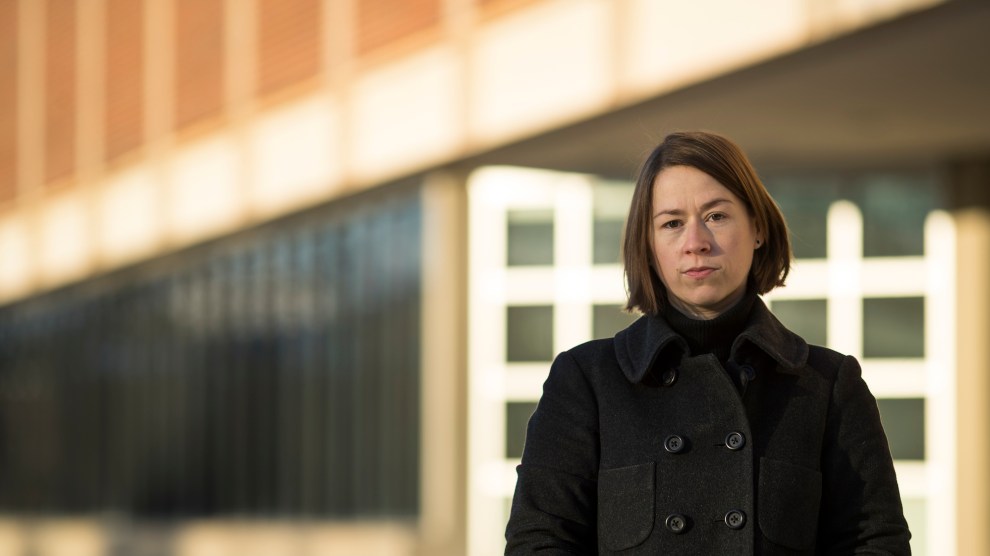 University of Rochester professor Celeste Kidd alleges that a professor sexually harassed her as a graduate student.Brett Carlsen/AP

A University of Rochester professor had multiple sexual relationships with former, current, or prospective students and engaged in “inappropriate, unprofessional and offensive” behavior with colleagues and graduate students over a six-year period ending in 2013—but none of it violated the university’s policies. Or at least that’s the conclusion of a report released on Thursday by a team of investigators led by Mary Jo White, the former US attorney and SEC commissioner who was hired by a UR committee in September to investigate the allegations and the university’s handling of them.

After the report was released, University of Rochester president Joel Seligman announced that he had decided to resign. “It is clear to me that the best interests of the University are best served with new leadership, and a fresh perspective to focus on healing our campus and moving us forward in a spirit of cooperation and unity,” he said in a statement. He will step down on February 28.

The university, some of its administrators, and the accused professor, T. Florian Jaeger, were the subjects of Equal Opportunity Employment Commission complaints last summer. In identical filings, seven current and former professors and a graduate student in the university’s prestigious brain and cognitive sciences department—including Time “Silence Breakers” Celeste Kidd and Jessica Cantlon—claimed that the university had mishandled a 2016 internal investigation into the the behavior of another one of its professors, Jaeger, and found him not responsible for violating university policy.

White’s report is largely the result of outrage among UR students and alumni after the EEOC complaint was made public in a Mother Jones story in September. Not long after, Seligman compared the professors’ complaint to the infamous Rolling Stone account of a gang rape on a college campus, which was published pseudonymously and later discredited. Students, outraged at the comparison, promptly organized protests including a hunger strike, and more than 400 academics in Jaeger’s field signed a letter urging students and colleagues to boycott UR. In response to the outcry, the university quickly changed its stance, putting Jaeger on paid leave from teaching and setting up the committee that hired White.

White’s 213-page final report, now available online, largely vindicates the university’s initial 2016 investigation, concluding that it had acted in “good faith, impartially, professionally,” and in accordance with its own policies. The report finds the university did not act in error, but it did find that when a graduate student first reported Jaeger in 2013, and Jaeger’s department chair first spoke to him about the concerns, the university neglected to recognize the complaint as potentially involving sexual harassment. “We consider it a missed opportunity,” the report says. Jaeger wasn’t investigated for sexual harassment until 2016.

While the report doesn’t find Jaeger’s actions illegal, it does condemn his behavior as a professor from the time he was hired in 2007 through 2013. “His conduct during this early period reflected poor judgment, immaturity and a naïve and stubborn belief that continuing his graduate student lifestyle, including extensive socializing with students, was permissible and posed no risks,” the report said. “Some former female graduate students [in the department] had to endure behaviors and inappropriate remarks that they should never have had to, at UR or at any educational institution.”

White’s team, though, still did not find evidence that female graduate students had been subjected to a hostile work or academic environment since 2014, after the university revised its policy on faculty-student relationships.

“I think Professor Jaeger paid attention to what those policies allow and did not allow,” White said at a press conference on Thursday, where she emphasized that legally, she did not believe his actions met the definition of sexual harassment. “We don’t think there’s a claim there under those laws,” she said. “But the acts…were offensive, inappropriate, and what I would call ‘in the nature of sexually harassing acts.'”

“It’s a difference between the legal standards of what’s required and a moral judgement,” she added.

The allegations against Jaeger were first raised publicly by a group of faculty members last September, after they filed their EEOC complaints. They also claimed that UR retaliated against them for reporting Jaeger and participating in the complaints against him.

White’s report, while criticizing some of the decisions made in the aftermath of the 2016 investigation, also found that the university did not retaliate. But it did recommended that UR clarify and expand its procedures for dealing with sexual harassment by faculty members. It also suggested a stricter policy prohibiting intimate relationships between faculty and students in the same department, saying it was troubled by Jaeger’s relationships with multiple students in the brain and cognitive sciences department. “These relationships contributed, at least in part, to making some female graduate students in BCS uncomfortable; in some cases, these women actively avoided pursuing academic opportunities with Jaeger.”

Last month, the group that filed the EEOC complaints followed up with a lawsuit against UR, its provost, and Seligman. Because of the pending legal case, they declined to participate in interviews with White’s investigators. That means White’s report—while based on about 140 interviews with other witnesses, including Jaeger—relies on old statements by some of the most central players. The professors argue that this is a fatal flaw. “Your investigation is structurally unable to get evidence from the main actors in the stories you are trying to reconstruct,” the complainants’ lawyer, Ann Olivarius, wrote to White in November. “Promising a comprehensive investigation when you know it cannot be comprehensive strikes me as fundamentally fraudulent.”

Update, January 11, 6:10 p.m.: At a press conference on Thursday evening, the complainants said they would continue to pursue their case against UR in court, arguing that the report’s findings about Jaeger’s behavior—contrary to White’s conclusions—actually support some of the central arguments of their lawsuit. “Here we are in a situation in which she says students suffered experiences they never should have had to endure,” said former department chair Elissa Newport, one of the complainants. “It is not acceptable to say people have behaved offensively and inappropriately to our students, but nobody did anything wrong.”

Update, January 13, 2:50 p.m.: In a statement, Jaeger reaffirmed the report’s findings that he did not sexually harass students, retaliate against anyone, or violate UR policies. “Although I disagree with some aspects of the report, I agree that I could have shown more maturity when I arrived as a 31-year-old faculty member in 2007,” he said. “Over time I have addressed many of these shortcomings. I never intended to cause harm to students. I deeply regret that my former behavior made some students uncomfortable and may have discouraged them from working with me.”